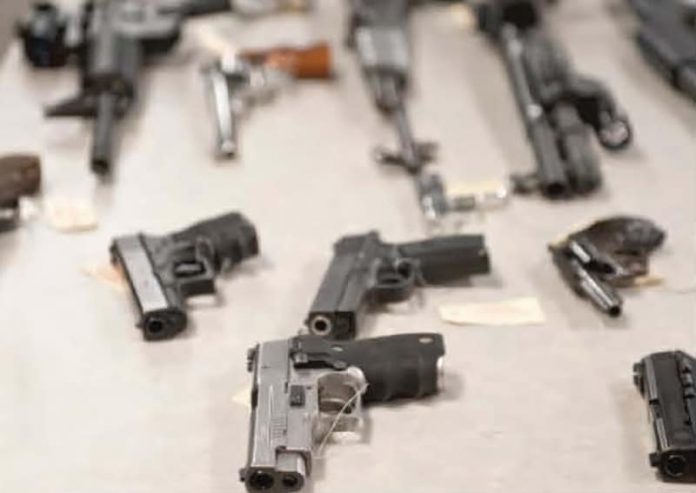 The National Instant Criminal Background Check System recorded 60,745 handgun checks and another 30,602 for long gun purchases, the most ever conducted in Illinois since the federal database rolled out in 1998.

Meanwhile, Chicago’s murder rate has outpaced 2015 with more than 500 homicides to date. Chicago Police Department Superintendent Eddie Johnson told The Chicago Tribune on Tuesday an influx of illegal weapons, gang activity and rampant poverty fuel the violence plaguing the city. He says the department has seized 6,000 illegal guns this year so far.

“People ask me, ‘How come Chicago’s murder rate can’t be like New York and LA?’ And I tell you, give me gun laws like New York and LA, and you’ll see homicide reduction,” Johnson said during an interview with Chicago Tonight last week. “In New York, first time you get caught with a weapon, three and a half years mandatory sentencing.

“In LA, they have a law called Use a Gun and You’re Done. So, whatever you get charged with, you get an additional 10 years tacked on to it. That sends a clear message that we won’t tolerate gun crime.”

The surges in the city’s murder rate and the state’s gun sales, however, are no coincidence, says Valinda Rowe, spokeswoman for IllinoisCarry, a nonprofit legislative action group with ties to the National Rifle Association.

“I think that has people in the city very nervous,” she said. “They realize the police force cannot protect them.”

“That’s significantly higher than the pattern that we’ve been seeing,” she said. “We usually see a 2,000 to 4,000 average increase.”

FBI Director James Comey said in June, however, the crime wave isn’t unique to Chicago. The Associated Press reports violent crime has surged in Los Angeles and Indianapolis, too. Background checks in those states, however,  haven’t experienced the same dramatic spike seen in Illinois.

NICS data serves as a barometer of gun sales nationwide, indicating a sharp rise in the state’s legal weapons market.

The National Shooting Sports Foundation, the industry’s leading trade association, links increased gun sales to an overall drop in crime nationwide. In a July blog post, the NSSF writes “violent crime continues its downward trend, even as the firearms market sees more and more growth over the past two decades.”

“So, you should have no confidence in those numbers indicating anything,” he said. “In fact, we are not issuing adjusted NSSF adjusted numbers unless and until we can gain some confidence in the reporting.”

“We always see an increase in firearms purchases the closer we get to an election when we have a candidate that is what we consider anti self-defense,” she said. “Hillary Clinton has made off comments about repealing the second amendment if she could. The election being as close as it is, people are nervous and thinking if she gets elected, their rights could be severely curbed.”

The Chicago Sun-Times reported in February gun sales in Illinois have been on the rise since 2013. State police data obtained by the newspaper showed a record 60,000 state background checks performed in December 2015 alone. Federal background checks for that month topped 37,193 handguns and 20,864 for long guns.

Illinois is one of a handful of states that requires possession of a Firearm Owner Identification Card for all gun purchases and is considered to have some of the strictest gun control measures in the nation.