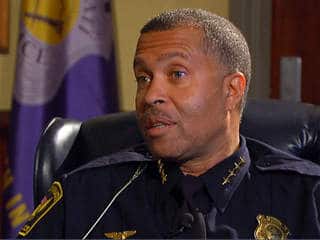 Anyone who reads this blog knows this is how I feel about it. It was a huge surprise to me to have these exact words “If More Citizens Were Armed, Criminals Would Think Twice About Attacking Them!” come from the mouth of the Detroit Police Chief James Craig.
While Chief Craig of the Detroit Police Dept is not exactly pro gun. It is a refreshing change to find a Chief that is not only willing to speak out on his feelings but to actually encourage people to own and carry guns.

Here is a highlight of some of the things said by the Chief.

“When we look at the good community members who have concealed weapons permits, the likelihood they’ll shoot is based on a lack of confidence in this Police Department,”
Coming from California (Craig was on the Los Angeles police force for 28 years), where it takes an act of Congress to get a concealed weapon permit, I got to Maine, where they give out lots of CCWs (carrying concealed weapon permits), and I had a stack of CCW permits I was denying; that was my orientation.
I changed my orientation real quick. Maine is one of the safest places in America. Clearly, suspects knew that good Americans were armed.
There’s a number of CPL (concealed pistol license) holders running around the city of Detroit. I think it acts as a deterrent. Good Americans with CPLs translates into crime reduction. I learned that real quick in the state of Maine.

Chief Craig is not alone in his feelings though he stands with only a select few officers to speak out on the topic.

According to a March 2013 anonymous poll of 15,000 officers by the law enforcement website policeone.com., almost 90 percent of the respondents believed casualties would be decreased if armed citizens were present during shooting incidents, while more than 80 percent supported arming teachers who were trained with firearms.

Having spoken with officers in my local community under anonymity it was a pleasure to hear similar comments.

The fact is police respond to crime and solve cases of rape, murder or burglary. They can not be everywhere at all times and often they are unable to respond fast enough to stop the crime. A well armed and more importantly a properly trained society would allow for a reduction in targets and victims.

Get your CPL, train with your firearm and lets help Detroit and the outlying suburbs continue the reduction in violent crime.