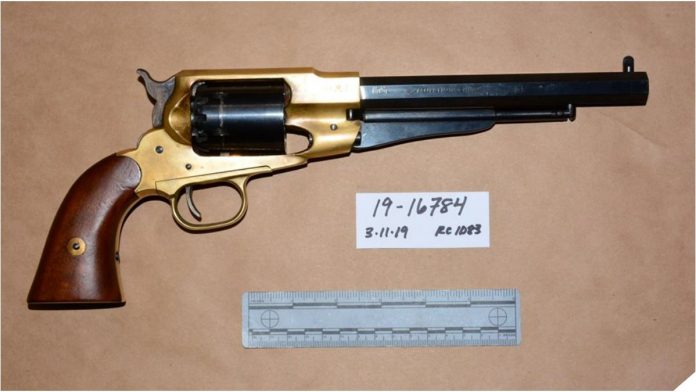 It’s been a while since someone carried a New Army cap-and-ball .44 for “protection,” but hey, it’s Fresno. (Photo: FPD)

A self-admitted member of the Ruthless Thug Life Fresno Bulldogs was stopped by local police on Monday with what they said was a loaded .44 Magnum revolver. Photos say different.

A release from the Fresno Police Department says they arrested Amador Carlos Martinez, 19, after a search during a traffic stop found the revolver under the vehicle’s driver seat. “Martinez said he possessed the firearm for his protection against other gang members,” said the agency.

However, while the report lists the gun as a .44 Magnum, the image attached details that it was a replica Model 1858 New Army .44-caliber cap-and-ball revolver of the kind made by a number of Italian firms, chiefly for the collector market. The brass-framed guns, which typically sell for around $200, often by mail order, are not regulated by the ATF due to the fact they are black powder. Further, the image released by FPD shows that the gun was not capped when the photo was taken.

The agency’s post to social media quickly resulted in over 2,000 comments in just two days. We went searching for some of the best so you don’t have to:

Martinez was booked into the Fresno County Jail for being a felon in possession of a firearm.