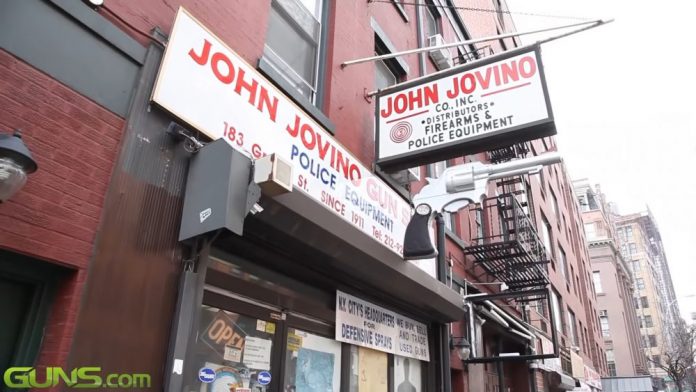 Gone from NYC is the John Jovino Gun Shop, originally founded in 1911. This photo was taken in 2014 (Photo: Ben Philippi/Guns.com)

In business in one form or another for over a century, New York’s famous John Jovino Gun Shop has closed its doors for the last time.

Run since 1995 by Charles “Gun King Charlie” Hu, who retained the branding, the business will not reopen after being shuttered due to Gov. Cuomo’s strict COVID-19 response which made no exception for the firearms industry.

To be sure, local media reports that Jovino’s has in recent years battled rising rents and the increased red tape of running one of the few legal gun shops in Gotham, but the lengthy interruption brought by the coronavirus pandemic was the final nail in the shop’s coffin.

“I’m very emotional right now, as you can see, I am having a rough day. Everything is super sad,” Hu told Stacy Joy with Vanishing New York. Joy posted images of the store’s closing, including Hu’s well-used Beretta 84, on social media.

Located on Grand Street in Manhattan’s Little Italy, the shop first opened in 1911 and is perhaps best known for its revolver-themed sign. The store, which was featured in films including Mean Streets and Serpico, as well as television shows such as Law and Order, is iconic. Crime scene photographer Weegee even lived over the shop in the 1930s and 40s.

We visited Jovino’s and met with Hu in 2014. That interview, below.

As for the sign, it was purchased in a private sale in February and is reportedly headed for California.