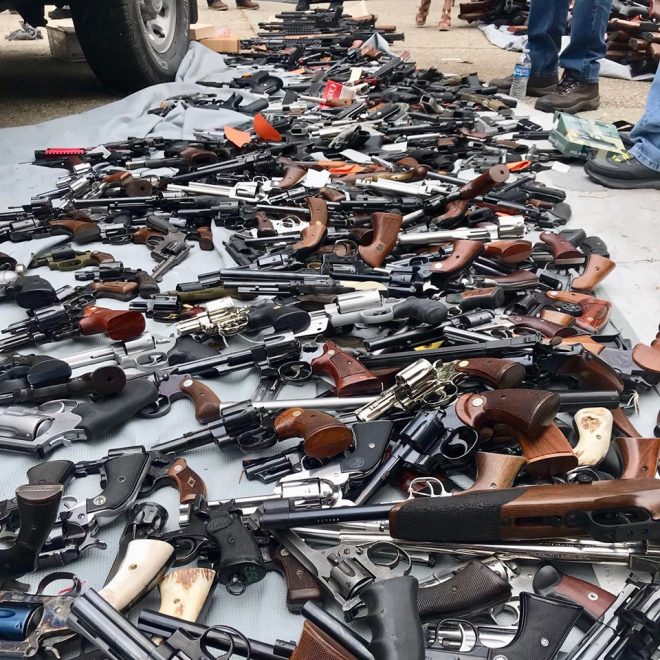 An anonymous tip from a neighbor triggered a search warrant on the Bel-Air residence of a California man that held over 1,000 firearms.

The Los Angeles Police Department on Wednesday described the search warrant at an affluent Holmby Hills residence as “one of the largest recoveries in LAPD history,” and released images of some of the guns heaped on the pavement.

The collection was extensive and wide-ranging, judging from photos released by the LAPD. While this array may look impressive for the cameras, it is heavy with Ruger rimfires including over a dozen 10/22 Takedowns, a Boy Scout commemorative, a few Ruger Mini-14s, and a single M1 Carbine. Another image shows semi-auto Thompson carbines, more rimfires, hunting rifles, a few AR-pattern guns and a couple of SKSs including one in a TAPCO SVD stock of the type popular in the 1990s.

While authorities say they received info that a person was selling and manufacturing illegal firearms at the location, the man arrested in the case, Girard Saenz, 57, was out on a $50,000 bond Thursday. Saenz is reportedly a contractor who owns several pieces of real estate in both the LA and San Franciso area.

Los Angeles area officials have long maintained a strict policy of melting down recovered and impounded firearms as well as those purchased via “buybacks.” In the past, this has included rare and collectible guns including a pistol once owned by performer Sammy Davis, Jr.