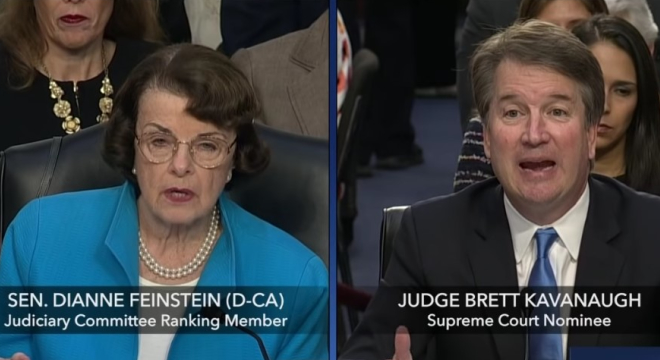 Senate Judiciary Dems asked tough questions of Judge Kavanaugh during his marathon first round of questioning on Wednesday.

Kavanaugh, a U.S. Court of Appeals judge nominated by President Trump to in July replace the open seat on the U.S. Supreme Court left by the retirement of Justice Anthony Kennedy, answered questions on his views on gun rights litigation in his second day of hearings.

In the more than 11-hours of back and forth with committee members, the jurist with a lengthy paper trail fielded a myriad of questions on immigration, abortion, an independent Judiciary and the limits Executive powers, but it was the Committee’s ranking Democrat, U.S. Sen. Dianne Feinstein, who probed him the most on the subject of gun policy.

Noting her office wrote the 1993 legislation that largely banned many semi-automatic firearms deemed to be “assault weapons” for a decade, the California lawmaker grilled Trump’s pick for the nation’s high court on his thoughts on such prohibitions.

“You specifically argued that the D.C. assault weapons ban was unconstitutional and I think because you said these weapons were in common use,” said Feinstein, referring to the jurist’s dissent from a majority opinion in the 2011 Heller II case which upheld the District’s ban. “What did you base your conclusion that assault weapons are in common use and what evidence or study did you use to do that?”

Kavanaugh, who has penned over 300 decisions in his decade on the bench, said he followed existing case-law in his decision, notably that of the first Heller case in 2008 and the follow-on McDonald case in 2010, both authored by Justice Antonin Scalia.

“I don’t get to pick and choose which Supreme Court precedents I get to follow. I follow them all,” said the nominee. “And Justice Scalia’s opinion used that phrase,” referring to the delineation between guns in common use and those considered dangerous and unusual weapons.

Feinstein was not impressed by the answer, and retorted: “You’re saying the numbers determine common use? Common use is an activity. It’s not common storage or possession. It’s use. So what you said was that these weapons are commonly used. They’re not.”

Kavanaugh held his ground. “They’re widely possessed in the United States, Senator, and they are used and possessed but the question is are they dangerous and unusual?” he said. “They’re certainly dangerous. All weapons are dangerous. Are they unusual? And given how prevalent they are in the United States it seemed under Justice Scalia’s test and if you look at the majority opinion in McDonald, the same thing.”

The Senator asked, “And you specifically argued that it was unconstitutional to…to ban assault weapons because they are in common use. And that I believe was your descent in the case?”

“Yes, and I was referring to some kinds of semi-automatic rifles that are banned by D.C. are widely owned in the United States,” affirmed the judge. “And that seemed to be the test that the Supreme Court had set forth in the Heller and McDonald cases — in other words, if a type of firearm is widely owned in the United States. Now whether I agree with that test or not was not the issue before me. I have to follow the precedent of the Supreme Court as it’s written and that’s what I tried to do in that case.”

Kavanaugh, a D.C-native who has school-aged daughters and applauded efforts by the District’s authorities to rein in crime, told Feinstein “of course the violence in the schools is something we all detest and want to do something about,” but held his ground.

“I fully understand the gang violence, gun violence, drug violence that plagues various cities including Washington, D.C,” he said. “This was known as the murder capital of the world for a while, this city, and that was a lot of handgun violence at the time. And so I understand the issue but as a judge my job as I saw it was the follow the second amendment opinion of the Supreme Court whether I agreed with it or disagreed with it.”

“By arguing that AR-15s can’t be regulated, Brett Kavanaugh made crystal clear that he’s to the right of Justice Scalia on guns,” she said on Twitter. “Even pro-gun Justice Scalia knew the 2nd Amendment did not protect all weapons in his opinion in Heller.”

By arguing that AR-15s can’t be regulated, Brett Kavanaugh made crystal clear that he’s to the right of Justice Scalia on guns. Even pro-gun Justice Scalia knew the 2nd Amendment did not protect all weapons in his opinion in Heller.