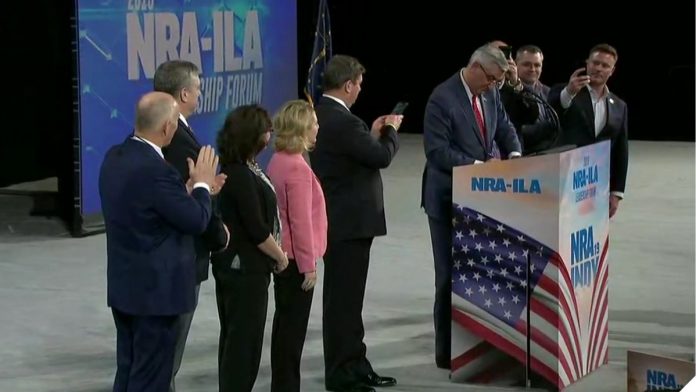 The measure, HB 1284, passed the GOP-controlled state Senate 37-7 and the House 64-17 earlier this month before it was sent to Holcomb. The bill slices fees on carry licenses, allows applicants to register to vote during the licensing process, and expands self-defense protections in the state.

“Removing any and all barriers for lawful carry in our state is significant for the many Hoosier gun owners who want to protect themselves and others,” said Holcomb before signing HB 1284 in front of a crowd full of NRA members at the Lucas Oil Stadium. “This is an important bill. This is an important next step.”

The new law removes all state fees on regular permits, which the measure lengthens to five years from the current four. The price for lifetime permits will be $50, reduced to $40 if the applicant already has a short-term permit. The new fees will go into effect in July 2020.

As part of the bill, Indiana State Police locations, as well as local law enforcement offices that process carry permits, will be designated as voter registration offices, allowing applicants easier access to that process. Further, the new law allows license holders to carry a firearm during religious services at places of worship on school grounds, a practice that was formerly illegal.

Importantly, the bill provides immunity for a justified use of force in certain instances and requires courts to award a defendant’s legal fees when a lawful gun user has to back up their actions in court. “Previously, an undue burden was on the defendant in exercising the right to self-defense,” noted the NRA on the move. “Under the new law, that burden is shifted.”