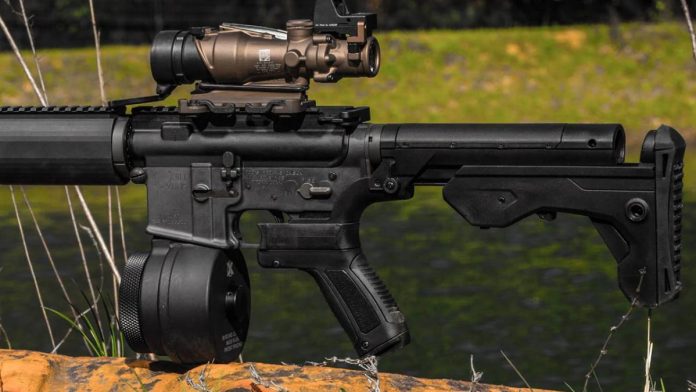 Two Ohio cities adopted a local ban on bump stocks last year and both have been dashed by the courts. Meanwhile, a federal ban looms. (Photo: Slide Fire Solution)

An Ohio judge last week rejected a ban adopted by the city of Cincinnati on bump fire stocks, siding with gun rights groups who challenged the local law.

Hamilton County Judge Robert Ruehlman on Monday hit city officials with a permanent injunction against the ordinance, leaving Cincinnati unable to enforce it. The lawsuit, brought by the Buckeye Firearms Foundation and Ohioans for Concealed Carry, argued the local ban was illegal considering state laws.

“This ban was completely unjustified and a great concern for gun owners,” said Dean Rieck, executive director of Buckeye Firearms Foundation. “Under Ohio law, local municipalities are not permitted to enact firearms laws that conflict with state law. And clearly, outlawing guns or gun parts is a clear violation of state law.”

It is not the first time that Ohio courts have thrown out a municipal bump stock prohibition. Judge David Cain, writing for the Franklin County Common Pleas Court, last year found that the city’s ban did not square against state preemption law which prevents local governments from regulating firearms.

Meanwhile, a federal ban on the devices, set to take effect in March, is the subject of numerous legal challenges. Last week, U.S. District Judge Dabney L. Friedrich heard a motion for a preliminary injunction on the looming national ban in a D.C. federal court, which, if granted, would keep the devices legal pending further rulings. Regulators believe there could be as many as 500,000 such devices in circulation.