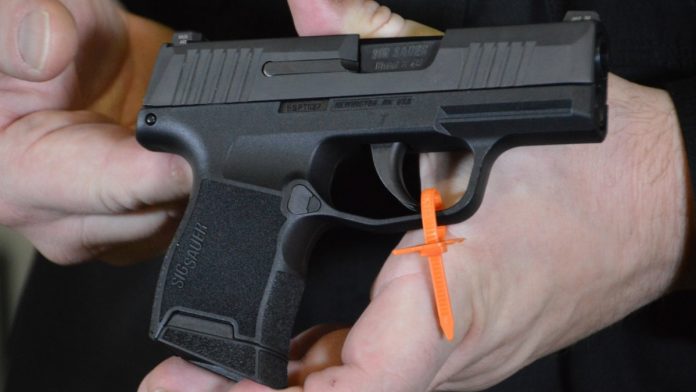 Kentucky and Oklahoma are set to be the 15th and 16th states to have a permitless concealed carry law. (Photo: Chris Eger/Guns.com)

The number of states recognizing permitless concealed carry is set to grow by two before the year is out.

In Oklahoma, Gov. Kevin Stitt signed HB 2597 into law on Feb. 27. The bill leaves the state’s current concealed carry licensing program intact while recognizing that an adult aged 21 and up and is lawfully able to possess a gun can carry one concealed without such a permit.

“Oklahomans are strong supporters of the Second Amendment, and they made their voice known as I traveled across all 77 counties last year,” said Stitt, a Republican who replaced Gov. Mary Fallin this year. Fallin had previously vetoed a constitutional carry bill.

The new law, which passed 70-30 in the Oklahoma House and 40-6 in the Senate, also allows military service members at least 18 years of age to carry. It takes effect on Nov. 1.

In the Bluegrass State, Republican Gov. Matt Bevin says he is ready to sign SB 150 into law. Similar to Oklahoma’s constitutional carry measure, the Kentucky bill sailed through the legislature with broad support, with the state House giving it a 60-37 thumb’s up last week.

“It doesn’t break new ground. It simply says that people do indeed have the right to keep and bear arms,” said Bevin. “… For those people who are offended at this idea and don’t like it, there are other places in America where they could live.”

With three new states moving to trim red tape and licensing away from concealed carry so far this year, a number of others are also looking to join the club.

In Georgia, HB 2 has been pending in the state House without gaining any tractions. However, the state’s top Republican, newly-installed Gov. Brain Kemp supported the move while campaigning and told local media last month, “My positions from the campaign have not changed.”

Elsewhere in the South, the Alabama state Senate could take up a bill supported by Senate President Pro Tempore Del Marsh as soon as this month while Texas Republicans– who outwardly support the concept — have a measure getting increasingly stagnant in committee.

Finally, in Iowa, SF 165 is nearing a looming deadline to move forward on its own legislative journey or get left behind. Hawkeye State pro-gun groups are trying to turn up the heat on GOP lawmakers to advance the proposal which has been tossed around the Statehouse for the past decade.