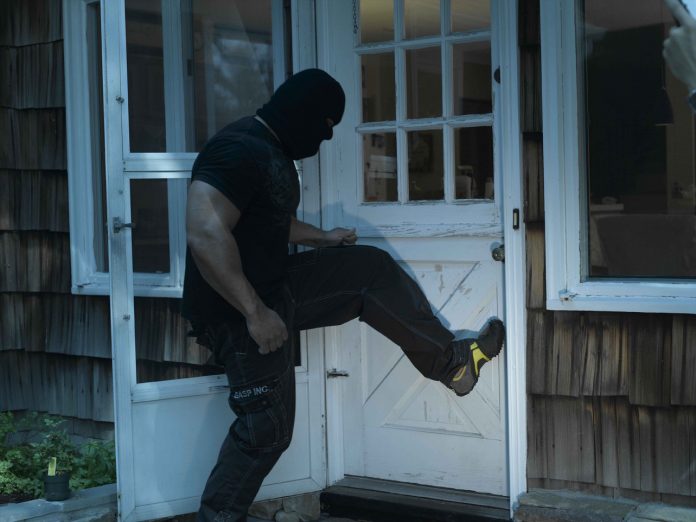 Two years ago I was almost given a terrible reminder of lessons I thought I already knew. I had come home from work early on a random weekday evening. It was about 430pm and I was sitting on the couch in my front room listening to a conference call for work with my laptop in my lap. I had changed into sweatpants and a t-shirt and after saying hello to my wife and newborn daughter, settled in for a long session of listening to folks argue over a project plan. Suddenly the relative quiet was shattered by a resounding boom from the direction of my front door. I snapped my head in that direction and jumped up to see what was going on. At the same time that I sprang to my feet, another loud boom came from the front door. This time I saw the door bowing in (my front entryway is a double door that opens from the middle- see picture below) and a stunning realization hit me, someone was trying to kick my front door in!

I immediately raced to the door and slammed my shoulder into it as hard as I could. When I did this I heard a grunt from whomever was outside as I pushed the door back to flush. I noticed that the door had been hanging on by a thread, only still closed because of the EZ Armor my Father in Law and I had installed some months earlier.

As I held my front door shut with all my might many thoughts went through my head. This first of these was where is my gun? The answer to this question was upstairs in the bedroom where it would do me absolutely no good. When I had come home from work and changed out of my monkey suit I had left the pistol upstairs because I wanted to wear sweatpants and be comfortable. As I waited for another kick to hit the door I frantically looked for anything in the vicinity that could be used as a weapon, but finding nothing I resolved in my mind to go hand to hand with whomever came through that door, even if they were armed, as I knew my Wife and newborn were only feet away from a potential intruder. Moments passed and nothing happened, so I chanced a peek out the window in the room next to our front door. I just caught someone in a hoody jumping into an SUV in my driveway as he slammed the door and they backed into the street and sped away. Almost as soon as I realized the attack was over and that we were safe, a sudden cacophony of sound assaulted me. The dog barking, my daughter crying, and my wife screaming all punctuated just how serious this situation could have been. I took a moment to collect myself, consoled my wife, and called the cops. My family had just dodged a real bullet and I knew it was my responsibility to learn from the situation.

As with any after action report there were a few good things I did right leading up to this event. First and foremost I believe it is extremely important to put some thought into hardening your house no matter where you live. My home is in an upper middle class neighborhood where this sort of thing “just doesn’t happen” yet my next door neighbor had his house broken into about a year before this event. When that occurred I took action to help make my house more resistant to break in, and up armoring the doors to the house was one of those steps. This EZ Armor door kit wasn’t really that expensive and installed with some screws and a little filing/fitting. I truly believe that the only thing that kept that door intact long enough for me to get to it was the EZ Armor product. Secondly, I had talked through and rehearsed with my Wife what to do in the event something like this happened. She quickly grabbed up my daughter and sought out a safe place, apparently I yelled at her to “take cover” but I honestly don’t remember this. She grabbed my Daughter and got ready to run without question, and without coming to see if she could help me or to determine what was going on. I think talking through and even rehearsing these kinds of events with family is critical to those of us that don’t live alone. Now don’t get me wrong, I’m not advocating getting to elaborate or scaring young children with this activity but you need to have some kind of plan in place and have practiced executing that plan.

Now on to the part that has made the most impact on me, the thing I screwed up. As I am sure the reader has gleaned by this point my big screw up was not having my gun on me. I know a lot of people think you don’t need to carry a gun in your own home, or in the day time, or any number of other rationalizations- I used to be one of them. If this is you, then you are wrong. I now have a firearm in easy reach no matter where I am in my house. I carry my gun, even in my own home, all the time. The big problem is that I knew I should have been carrying my gun at home even before this happened. Even having taken multiple shooting courses focused on personal defense and hearing the exact words “carry your gun all the time” come from the mouths of such respected trainers as Matt Jacques of Victory First and Pat Rogers of EAG Tactical wasn’t enough to overcome complacency. I served in Afghanistan and I know good and well that evil exists in this world and then when the moment of truth comes you had better stand ready….and I still got lazy. Folks, I am begging you to take a look at what you can do to harden your home, come up with emergency plans and practice them with your families, and above all train with and carry your weapon. All the time. Even at home. Even when its hot or cold or rainy or uncomfortable. If this could happen to my family, in a nice neighborhood in broad daylight it could happen to anyone. In this seemingly ever more dangerous world, the only ethical choice is to take personal responsibility for the safety of yourself and your loved ones. Owning, training with, and carrying a firearm is by far the best way to do that.

BIO – Rick Topping: Rick is an Ex-Army Signal Officer, Father, Husband, and professional IT geek. He enjoys shooting, HAM radio, reloading, and many other hobbies that probably cost too much money and take up too much time. He has recently started a blog to share his knowledge and passion in the realm of emergency preparedness and can be contacted at https://learn2prep.wordpress.com/