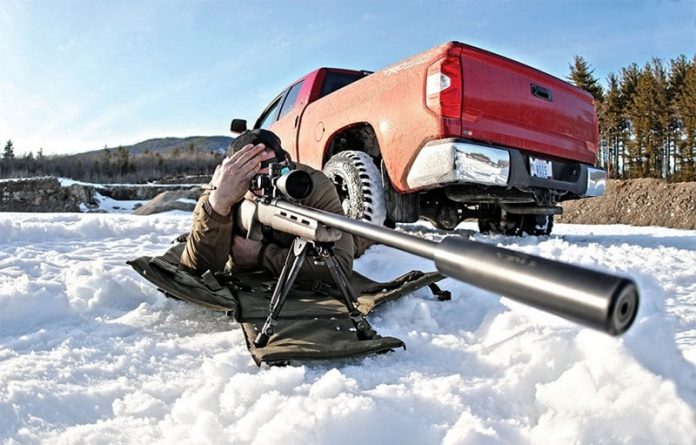 Howa enters the long-range game with a rifle unlike any Howa that’s gone before.

There was a time, long ago, when I viewed the Howa 1500 rifle as a somewhat less-attractive sister of the Weatherby Vanguard, which was also made by Howa and was, to my eye, more appealing. Both had slightly different versions of the same solid, time-proven action, based on a Sako design with some Mauser features, but the Vanguard was the one I would ask to the dance first.

Those days of viewing Howa rifles as a runner-up are long past. The guns, which have gained considerable popularity over the years, now begin life as barreled actions manufactured by Howa Machinery LTD, in Japan. Those barreled actions are imported by Legacy Sports International, a Nevada firm that clearly has its fingers on the pulse of American shooters. Legacy puts together completed rifles in about 20 configurations tailored to specific uses.

A case in point is the new Howa Long Range Rifle, offered initially in .308 Win. and 6.5 Creedmoor. It differs in many respects from any Howa rifle that has hit U.S. shores before, and is set up, as its name implies, to enable you to reach out and touch things way out there.

Upon unboxing the rifle, you’ll immediately notice a couple of very non-standard features on the Long Range Rifle. For starters, the rifle sports a heavy contour, 26-inch Chromoly steel barrel. This is, to my knowledge, the first time Howa has offered a heavy barrel in this length, which is designed to send rounds downrange at maximum velocity. The barrels are cold hammer forged, with a 1:10” twist rate for the .308 Win. chambering. Barrels chambered for the 6.5 Creedmoor have a 1:8” twist rate. The end of the barrel is threaded and ready to accept a suppressor or muzzle brake, and has a thread protector cap.

The second thing you’ll notice is the very substantial Bell and Carlson stock, in a varmint/tactical configuration with a wide, flat-bottomed forend with fluted cuts. The stock on our test rifle, chambered in .308 Win., had an attractive desert tan and black spiderweb finish. It will also be available with an olive green and black spiderweb finish. Rock-solid bedding is provided in the form of a full-length aluminum bedding block which allows the heavy barrel to remain free floated over its entire length. The stock has dual front swivel studs and a one-inch Pachmayr Decelerator recoil pad. It has a 13.5-inch length of pull, and weighs approximately 2.5 pounds.

Added to the beefy action and heavy barrel, the stock brings the rifle’s unloaded weight to a hefty 11.4 pounds. Unless you’re training for the Olympics, you won’t likely be running up and down mountains with it anytime soon, but that’s not what the gun is designed for. It’s designed as a stable platform to hit targets and varmints at distance. The rifle is sold alone or packaged with a Nikko Sterling Diamond 4-16×44 scope.

“This gun is geared to let you go shoot targets at 1,000 yards, right out of the box,” says Legacy’s Matt Hornback. “That’s why we offer it with a first focal plane scope.”

For those unfamiliar with the Howa 1500 action, it is a push-feed design with a forged, flat-bottom receiver and an integral recoil lug. It utilizes a Mauser-like, small-bodied, one-piece bolt, with three gas pressure relief holes, and can be easily disassembled by hand for cleaning. The bolt has a recessed face and two large opposed locking lugs, and is equipped with a strong Sako-style extractor and an internal plunger ejector. A breeze to bed, the action has become somewhat popular as a starting point for those building their own rifles.

The magazine is of the traditional hinged-floorplate design, with the magazine latch positioned in front of and protected by the trigger guard. All bottom metal is, happily, actually made of metal. Magazine capacity is four-plus-one for 6.5 Creedmoor and five-plus-one in 308 Win.

It’s worth noting that, since early 2016, all Howa rifles now come with what the company calls the Howa Actuated Trigger system (HACT). It’s an adjustable, two-stage design that arrives from the factory pre-set to a pull weight of about three pounds. It’s adjustable down to a pull weight of just over two pounds. This upgraded trigger, which can be fitted to older Howa 1500 rifles, is designed to eliminate creep and provide a lighter trigger pull. It did exactly that in testing. I found the trigger to have a very light initial take-up before meeting a solid stop and breaking cleanly.

The trigger on our review rifle broke consistently at a pull weight of 3 lbs. 1 oz., as measured on a Lyman trigger pull gauge. That’s slightly heavier than I would like, but I left the trigger at the factory setting to duplicate a buyer’s out-of-the box experience.

The trigger is mated to a three-position safety located on the right rear of the receiver just behind the bolt handle. It falls within easy reach of the thumb. In the rearmost position, the safety is engaged and the bolt handle is locked. In the middle position, the safety is engaged, but you can work the bolt to load or unload the rifle. The safety has to be pushed to the full-forward position to disengage and allow the rifle to fire. There’s enough tension on the safety that it’s unlikely to be accidentally knocked out of position, and it moves between stops with audible and tactile clicks.

I chose to test the Long Range Rifle with a Nightforce SHV 4-14×50 mm F1 scope with an illuminated MOAR (minute of angle) reticle. This ruggedly constructed scope is also a first focal plane model, with a zero-set elevation screw allowing return to zero at any time, making it ideal for long-distance shooting.

Unfortunately, I didn’t have the opportunity in my short visit with this rifle to wring it out at long distance, but I was able to put five different factory loads to the test at 100 yards. The rifle did not disappoint, as four of the five tested loads shot best groups living up to Howa’s accuracy guarantee of one inch or less at 100 yards using premium factory ammunition. As might be expected, the rifle performed best with match ammo.

Top accuracy honors went to the Federal Premium 168-gr. Matchking load, which produced a best group of 0.39 inch and an average group size of 0.65 inch. Winchester’s 168-gr. Matchking load was a close second, and Hornady’s Precision Hunter 178-gr. ELD-X round was no slouch. The rifle did not much care for the single 150 gr. load tested, and average group size for that load would have been larger save for one tight group that brought the average down.

Velocities were quite close to factory advertised velocities, ranging from 80 f.p.s. slower for the Winchester 150-gr. Razor Boar load to 18 f.p.s. faster for the Hornady 168-gr. Full Boar load.

The rifle chambered rounds without hiccup and ejected brass smartly, but extraction was a little sticky with one of the tested loads. I had to wait a few seconds for the brass to cool and then extract the empty cases. Oddly, that only happened with one of the five loads, and I made a mental note to scrub the chamber thoroughly before using that load again. Otherwise, the bolt cycled smoothly, and the rifle fed without issue from the magazine.

The rifle comes with a lifetime warrantee for the original purchaser. Suggested retail for the rifle alone is $1,015, and the price for a scoped package is $1,299, which includes the scope, a 20 MOA 2-piece base and rings. For more information, contact Legacy Sports International, Dept. OT; Tel,: (800) 5-LEGACY; Web: www.legacyspsorts.com

Velocities measured with a Competitive Edge Dynamics M2 chronograph. All groups fired in a 5- to 10-mph wind from the bench at 100 yards.

Representing one of the most outstanding values in long-range optics, the SHV 4-14×50 F1 riflescope from Nightforce—shown here mounted in a set of Nightforce X-Treme Duty Ultralite rings—is the company’s first (and only) SHV scope built with a first focal plane reticle. It delivers first focal plane performance in a versatile, mid-power package suitable for a wide range of shooting applications. This feature gives the shooter the option of precisely holding for elevation and windage at any magnification setting by using the subtensions built into the reticle. It is offered with the choice of a MOAR or MIL-R reticle, both with illumination standard. Featuring a 4-14x magnification range it offers an excellent combination of field of view and adequate magnification for the long shots. The 50mm objective lens provides excellent light transmission any time of day. Other features include a 30mm main tube, 90 minutes or 26 Mil-radians of adjustment range in 1/4 minute 1/10 tenth mil-radian click adjustments, Nightforce ZeroSet for rapid return to zero, parallax adjustment from 25 yards to infinity, 12 illumination brightness settings and a fast focus eyepiece. For more information contact Nightforce Optics, Dept. OT; Tel.: (208) 476-9814; Web: www.nightforceoptics.com