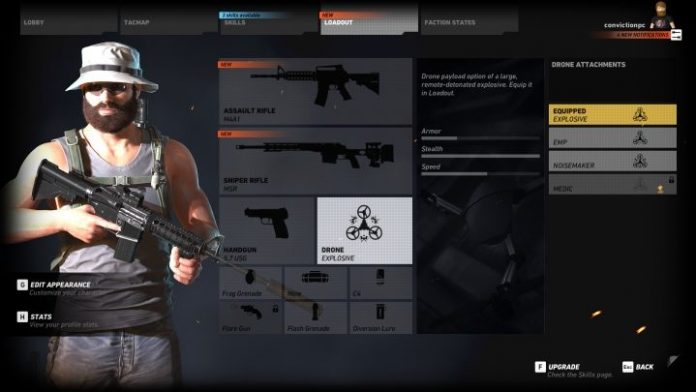 Most people are fairly critical of the media portrayals of gun handling, and the related content and behaviors. Everything from “cup and saucer” grips on cop dramas, to the infamous “cocking Glock” on The Walking Dead. TV, movies, and even video games generally give us a pretty unrealistic perspective on how living with and carrying guns generally works. But there are those rare instances where you find something useful:

Ok, so it’s not exactly a direct correlation, but I do find myself configuring my daily carry setup along similar lines to how modern FPS games have you equip your character.

Stick with me here, I promise this will make sense in a minute.

One compliment that modern game designers have been getting is paying more attention to the realism of their games; both in the visuals, but also in the performance of the equipment and how much a character can carry. With the current crop of Ghost Recon/Rainbow Six/Call of Duty titles, you get to customize your character’s loadout. You’re generally limited to:

Level 1 (always with me with no exception): MEDICAL. Why is this at the top of the list? Because it’s the solution to the widest scope of problems I might encounter. I can find myself (or someone else) in need of medical aid whether or not a confrontation has taken place.

The bare minimum that I carry for this is a tourniquet and a pack of Quikclot carried in a Wilderness #8 Pouch. If I want to add chest seals and other gear, I’ll bring in an ankle IFAK. I also keep IFAKs in all my vehicles, one in my range back, and another one if I’m carrying a briefcase or shoulder bag.

Level 2 (with me wherever possible, unless prohibited by law): LESS LETHAL. Wait what? Not the gun!?!?!?! *unsubscribes intensify* Hear me out. There are plenty of interpersonal conflicts where some level of force might be appropriate, but deadly force may not be necessary. Additionally, there are places I like to go (namely the extensive list of cocktail bars my town offers) where carrying a firearm is legally prohibited. But I can still have

POM Pepper Spray: It allows me to basically perform the “eye jab” that Craig Douglas teaches during his Managing Unknown Contacts (MUC) block at greater than arms reach. (Literally, after taking ECQC one of the first things I did was buy pepper spray because the class showed me how easily people can encroach on you, and how unpleasant it is having to go hands-on with someone). The legal threshold* (at least where I am) for using OC is dramatically lower than it is for deadly force. It can help dissuade someone that’s not taking “no” for an answer, but not posing a deadly threat. It offers a solution that’s “between harsh words and a gun” to shamelessly steal the title of Chuck Haggard’s OC class.

A Sap: They’re legal to carry in Texas for the last few years. I took a short form class from Larry Lindenman at Tac-Con back in March, and it showed me the real value of a purpose-built impact weapon. The biggest advantages are that they’re flat, low-profile, and easy to carry. You can modulate the level of force being applied, depending on if you’re striking with the flat vs. the edge, and where on the body you’re striking. They can also be discreetly “staged” during the MUC process, so that it’s ready to use if needed.

Level 3 (with me wherever possible & when appropriate): FLASHLIGHT. There are also those that insist on carrying a light everywhere, all the time. for me, that’s a little excessive. Don’t get me wrong I’ll throw it in my pocket, especially if I’m dressed down and more casual, but I don’t make it a point to bring a light unless I’m going out past 5 PM. My current light of preference is the Cloud Defense MCH High Output. The combination of size, output, and overall build helped edge it out ahead of the competition.

Level 4 (with me wherever legally possible): DEADLY FORCE. Generally the only time I’ll carry a knife for defensive application is if I’m going somewhere where firearms are legally prohibited (like bars in Texas). Most of my edged weapons are either Shivworks designs, or variants thereof. As for firearms, it’s either going to be my Glock 19 in a Dark Star Gear Orion on a PHLster Enigma, a Ruger LCR either in a pocket or in a DSG/Enigma combo, or my KelTec P32 in a Mika pocket holster. I virtually never find myself carrying an extra magazine.

That’s right. The firearm is the last item on the list of tools I’ll carry. This is because of a few different reasons: Firstly, my job and interests regularly take me to places where I’m prohibited from carrying a gun. Secondly, because of how I live my life, there is a greater chance of me encountering a non-gun problem.

There are folks out there that will espouse that “I won’t go anywhere I can’t carry”, and that’s certainly their prerogative, but I think that limits one’s potential life experiences. There are also those that will say “Concealed means concealed. What they don’t know won’t hurt them”, suggesting that they would carry their firearm in violation of posted laws. Again, that’s certainly their call (not that this blog advocates law-breaking). But understand the risk you’re taking on. I’ve known people to lose their jobs or suffer other negative social outcomes that could have been otherwise avoided had they carried smarter and more appropriately.

One of the “catchphrases” you’ll hear regularly within the gun-carrying community is “Two is One, One is None” And that’s used to justify carrying 2 guns, extra mags, more than one blade, etc. For some people, depending on their lifestyle, that might be a realistic and appropriate loadout. For most of us who live life with a gun (as opposed to it being part of our job), preparing for the least likely event can prevent us from going about or day to day lives. Everyone likes to gear up for the Hollywood-style, “save the day” type of defensive gun use (DGU). John Johnston of Citizen’s Defense Research calls these “Sentinel Events”, and I think they warrant their own article.

Ultimately, everyone’s context will be different. What is appropriate for me may not be appropriate for you. I would encourage you to take a long, realistic, analytical look at your lifestyle, and make sure that your chosen equipment list accurately reflects that.

As always, Your Mileage May Vary. Only you know what’s best for you.

*I’m definitely not a lawyer, and nothing on this blog constitutes legal advice of any kind. You are solely responsible for everything your chosen carry gear complies with all local, state, and federal laws. I don’t know you, so I’m sure as hell not going to jail for you. It’s called being a responsible adult.