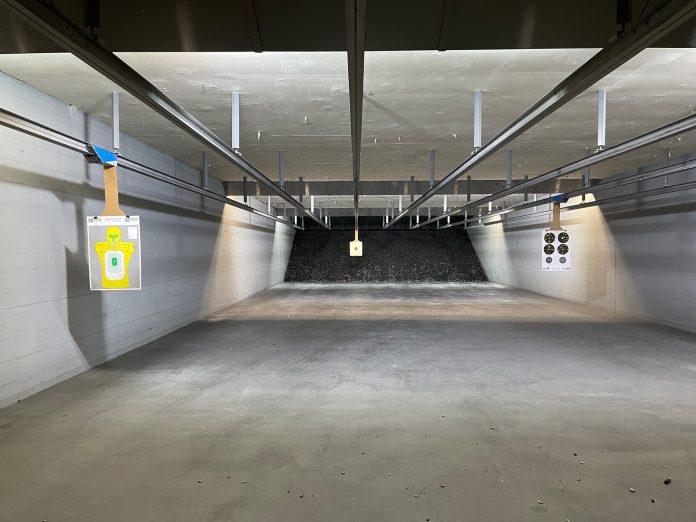 Ever since I shot bullseye on the Coast Guard’s team in 2001, I’ve been on-again off-again obsessed with extremely accurate pistol shooting. This obsession was only fueled by my deep dive into Bianchi Cup from 2009-2014, which ended with a top 10 finish at the NRA World Action Pistol Championships in 2014. When I think “long” range for handgun shooting, I’m thinking about shots that are past 20 yards, although there are some people that would consider that medium range. Regardless, for the purpose of this article we’re going to be talking about some tips and tricks to shoot a handgun well at intermediate and long ranges.

The first thing we need to absolutely nail down is that there is no substitute for good fundamentals. To get accurate hits at any range, you must first establish and maintain an appropriate sight picture, then pull the trigger in such a manner that you don’t disturb that sight picture. That’s it. That’s all that marksmanship, any marksmanship, really is. To borrow a quote from Steve Fisher, “It’s all just sights and triggers.” The stuff we do like grip and stance we do in order to make aligning the sights and pulling the trigger easier and more efficient.

With that understanding, we can start to talk about the important fundamentals of shooting a pistol accurately at long range. The first is to completely get rid of the idea of “far” or “close” targets. Just dump it straight out of your brain. There are no far targets, there are no near targets, there are only big targets and little targets. The reason why this is important is a mental trick that I’ve found useful. For whatever reason, when I think about a target being “far” I start to get in my head about it. “Oh, 25 yards is a really long way away,” or “man that pepper popper at 35 yards is a tough shot.” But I also know that I can reliably punch the center out of a 2 inch circle at 7 yards, which presents the same available target MOA as an 8 inch circle at 28 yards. It’s not a close target, it’s just big. It’s not a far target, it’s just small.

The second step is that you must be absolutely sure where your gun hits under optimal conditions. It doesn’t matter what distance you zero your pistol and sighting system at, whether it’s 25, 15, or 10, but you have to know where those rounds will impact at the distance you want to shoot at. It also helps to tailor your zero to what you want to do with the gun, for example if your heart’s one desire is to shoot a clean slow-fire 100-10x B8 at 25 yards, I would zero my gun for a six o’clock at 25 yards. If your heart craves violence, then a more practical zero like 10 or 15 may be in order, but regardless you still need to know where your gun hits at various distances.

Now we get to the technical bits, and the first technical bit is trigger pull. One of the big problems people run into when shooting pistols at this distance is fatigue. Holding a precise point of aim then pulling your trigger just right takes a lot of concentration, which is why I am an advocate for the “like a bike pedal” trigger pull method. In short, pull the trigger like you’d pedal a bike: one continuous motion that doesn’t stop until the gun goes off. Don’t stage it, don’t prep it, just pull it. If you have a Glock-esque trigger you can prep some of the slack out of it, but I feel like that forces people to think too much. Line up the sights, and just press the trigger to the rear with continuous pressure. The next trigger fundamental is reset, which is namely don’t even worry about it. The problem with “riding the reset” is that you get used to the audible/tactile click becoming your permission to shoot again, and it’s not. Your permission to shoot comes from your sights, not a clicky noise in your trigger. So once you’ve fired that shot with continuous pressure, just let go of the trigger.

The last important step to getting good at shooting at distance is to, as Rob Leatham once said about Bianchi Cup: get knee deep in brass. There’s no substitute for live fire, but the nice thing about long range shooting is that you can do a lot of it with fairly inexpensive rimfire ammo. To really master the fundamentals of sights and trigger, you can get a rimfire analog to your carry or competition gun, and start slanging lead at B8 targets or Bianchi Cup targets at 25 yards. A rimfire pistol and a B8 target will very quickly tell you if your trigger pull is deficient, and has been one of the best training aids I’ve ever had for precision shooting.

If you were hoping for some secret sauce about long range pistol shooting, I’m sorry to disappoint you. It turns out that Fisher was right, and it’s really all just sights and triggers. Time to start practicing, right?