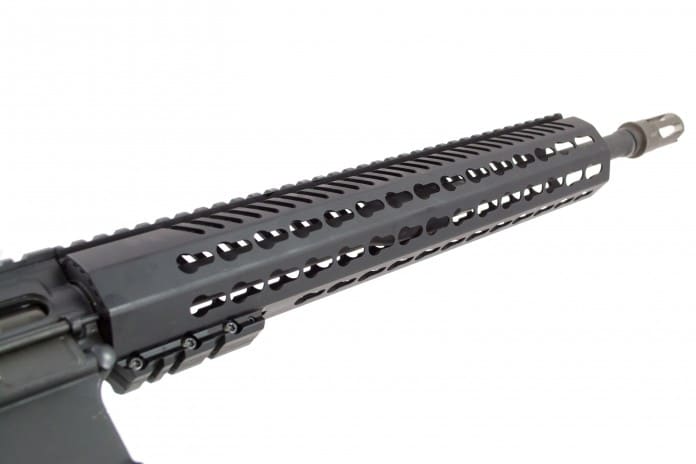 One of the best ways to compete with online discount retailers is to provide unique service capabilities. Demonstrating, teaching, helping and sometimes doing are all things that you can use to make your business indispensable. With that in mind, we’re launching a new series to help you and your staff learn and fine-tune skills that you can use to provide valuable services to your customers.

While sales of new units have slowed to more rational and sustainable levels, the AR-type rifle remains a hot topic. Many of your customers have them, and many of those who purchased ARs recently are newbies. That makes for an opportunity to provide advice and sell add-on products. After all, one of the great things about the AR-15 platform is its modularity.

With that in mind, let’s take a look at how to help your customer upgrade their stock AR plastic handguards to a more accurate (and sharper-looking) free-floated handguard model. Freeing the barrel from handguard stress allows it to operate independently of hand, sling, bipod or accessory pressure, thereby making it more consistently accurate shot to shot.

The first step is to remove the standard plastic hand guard. Simply pull the delta ring towards the receiver, and ease out each half of the handguard. The delta ring is under some serious spring pressure, so if you plan on doing this a lot, invest a few bucks in a handguard removal tool – you won’t regret that purchase.

At this point, I think it’s simpler to separate the upper and lower receivers. If there is an optic installed, go ahead and take it off as we’ll need to put the upper receiver in a vise in a couple of steps.

For purposes of this article, we’ll assume that the rifle has a standard A2 gas block and front sight installed. This will need to come off, at least temporarily. The easiest way to do this is to invest in a front sight block. This tool allows you to rest the front sight in a stable position so you can drive out the three pins that hold the sight to the barrel and gas tube to the front sight and gas block. Just a heads up here. These pins can be notoriously difficult to remove, so use a cupped punch that won’t deform the pins. Punch the pins out from the left side of the A2 sight toward the right. The two larger pins under the sight hold the assembly to the barrel. There’s a smaller pin on the upper side that is used to fasten the gas tube to the front sight. Once the two lower pins are removed, you should be able to slide the front sight off the barrel. They can be sticky so you might need to gently encourage it with a piece of wood or nylon hammer.

The barrel nut and delta ring will slide off the barrel as a single unit, so you’ll need to separate the two. You’ll only need to reinstall the barrel nut itself. Some free-floated handguards come with a custom barrel nut, so depending on which handguard you choose, you might be reinstalling a new one instead of the original. The Mission First Tactical handguard we’re installing here uses the standard barrel nut, so we’ll put the same one back on later.

You have to remove the barrel snap ring to separate the delta ring from the barrel nut. That’s easy with a pair of snap ring pliers but perfectly doable with needle nose pliers and a bit of reckless enthusiasm. If you use a screwdriver and pliers, remember to pick up that snap ring that probably flew across the room!

After all this work, it’s time to put the barrel nut right back on, as that will serve as the connecting point for this particular handguard. It also holds the barrel to the receiver, so that’s kind of important too. Before you put the barrel nut back on, be sure to apply some grease or anti-seize to the threads. The standard recommendation is to apply a torque of between 30 and 80 foot-pounds to the nut.

Most AR armorers tools have a hole for a half-inch driver, so you can get a torque wrench with a nice long handle to provide plenty of leverage.

I initially torqued the nut to 50 foot-pounds, then I tested to see if the gas tube notched lined up with the port in the receiver. I needed to tighten the nut just a hair more to get things to line up perfectly. Be sure to check before going to the next step.

At this point, y0u might run into an “it depends” situation. If the free-floated handguard is carbine length, you can reuse the A2 style front sight and gas block if you like. Or, you can install a longer handguard and replace the A2 gas block with a low profile model. Here’s we’re installing a long handguard, so I installed a VTAC low-profile gas block that will fit inside of the new handguard. Since the new gas block will be covered by the handguard, I installed that first. If you’re re-using the A2 front sight gas block, then install the new handguard per manufacturer instructions, then replace the front sight.

This Mission First Tactical handguard uses the standard barrel nut. Two clamshell braces contact the barrel nut itself and provide a platform on which the handguard mounts.

Once the clamshell brackets are pressed into place, the handguard simply slides over them. In this case, it took just a bit of loving and gentle encouragement, but the payoff was a tight and solid fit.

Once the handguard is all the way seated, I installed three screws with some red Loctite to keep the locking lever in place. This lever prevents the handguard from rotating around the mount.

Voila! With this KeyMod free-floated handguard installed, this basic AR-15 is like a whole new rifle. The best part is that it opens up the possibility to upsell lots of accessories like KeyMod rail segments, a light and mount, a laser, or perhaps flip up sights.