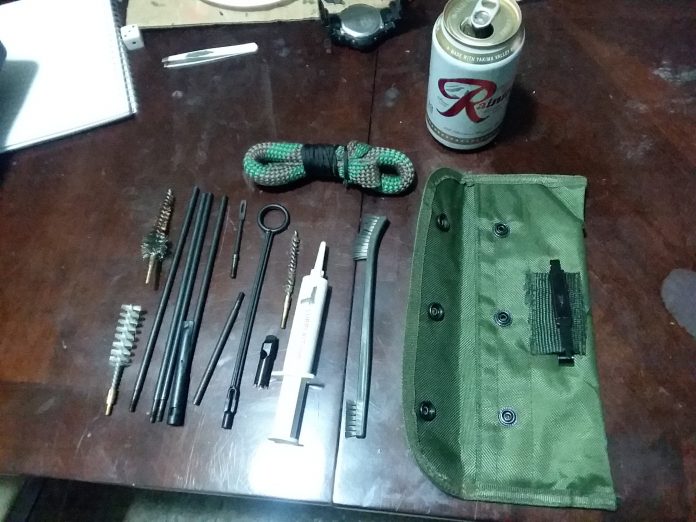 “The deadliest weapon in the world is a Marine and his rifle.” General John Pershing, U.S. Army.

No matter what their MOS is, every Marine is a rifleman. They are all trained to effectively engage targets out to 500 meters, perform basic battlefield maneuvers, and professionally maintain the standard issue service rifle. This is one of the defining characteristics that makes the Marine Corps the world’s finest fighting force; feared and respected by our enemies and allies alike. No better friend, no worse enemy.

As a United States Marine, I will personally attest to this and as such I can tell you that we individually and institutionally perform weapons maintenance at the level of an art form. Ask any Marine and he can tell you about long hours spent at an armory table scrubbing away with essentially a toothbrush and CLP, (a brand of cleaning/lubricant that Cleans Lubricates and Protects). I will be the first to admit that the level of cleanliness we strive for is a bit obsessive and overkill, but it is honestly a good habit to have. It is one of the small details that contributes to us being able to identify as professionals in a community of warriors.

Now, hands down probably the fastest way to clean your rifle is by throwing it into a solvent tank for a bit or sticking a 20 dollar bill inside the chamber when you hand it back to your armorer. But if neither of these is an option afforded to you, there is always the good old-fashioned way of doing it yourself by hand. To really accomplish this to a better standard, a few essential tools and products need to be acquired first.

First and foremost you are going to need a cleaning solution of some form. There are a variety of brands out their but as long as it one- prevents corrosion; and two- lubricates the firearm; you are generally good to go. However you are probably going to want to stick to an established brand that’s designed specifically for firearms. I prefer some of the following:

That being said, I have successfully lubricated weapons with motor oil, Vaseline, Aquafor, etc. I have also successfully cleaned weapons with diesel fuel, soap and water, WD-40, etc. Sometimes you have to get creative to improvise, adapt and overcome.

When it comes to tools, there are several preferred ones and kits you can buy, but this can also be very subjective to the rifle make and model. For the majority of this article, I will be referencing a kit associated to an M16/ M4 style of rifle, specifically a U.S. Military issue cleaning kit. Some universal items included or beneficial will be,

The small brush could literally be a tooth-brush or something similar in size and bristle strength. A cleaning rag could an old shirt or mechanic’s rag but can also be substituted by tissues or paper towels. Paper products often make things more difficult in my opinion. A bore punch and brush plus eyelet for cleaning a rifle bore and chamber is pretty much a standard for any service rifle cleaning kit.

What kind of operating system the rifle uses greatly dictates exactly where the carbon is deposited and build up can be seen. It should be noted that the majority of functional components are inherently going get dirty as well but at a much slower/smaller rate. To be specific, there are three primary types of operating systems that you are most likely to encounter.

Each one has a somewhat different way of operating but an altogether near-identical function which exists to cycle the firearm reliably.

Direct impingement is the system that governs the M16/M4 rifle’s form and function. When a round is fired, the hot gases expand up into the gas block, returning the gases back to the chamber via small gas tube where the force hits the bolt carrier group (BCG) back to chamber another round. This system, while reliable and more than functional, suffers from the downfall of having those hot gases being dumped directly into the BCG where they gradually foul up the interior. That can potentially cause the firearm to cease operation. To remedy this, the firearm should be frequently maintained and treated with lubrication, this will greatly decrease the chances of a malfunction occurring.

Gas-piston is the overwhelmingly more popular design that is employed by semi automatic rifles employed around the world. It functions by having the hot gases, upon reaching the gas block, force a metal rod that is either attached to or seated against the bolt carrier group to force itself backwards, chambering the next round. As it does this, the hot gases are vented out the sides of the gas tube, where the rod sits, up near the gas block. This method of operation is incredibly clean running as a result. It also has the benefit of keeping the BCG cool due to the lack of recycled heat. The downside of gas-piston operated weapons is that all that carbon build up occurs on the piston head and they are usually heavier in the front end, so they can be slightly more fatiguing to use.

Gas blowback operated rifles are rare and, for the most part, only seen used in pistols. The HkG3 and MP5 are two iconic firearms that employ this system. Blowback uses the force of the hot gases pushing against the spent cartridge, and BCG sometimes, to cycle the firearm’s action. Pistols do not get incredibly dirty because of a very open system, but the most can be found around the chamber’s exterior and coated lightly throughout the interior. Rifles tend to see a large amount of carbon due to their system being, enclosed but you could argue the BCG does not suffer the same abuse as the direct impingement’s. It’s kind of weird happy medium between the latter two systems.

There are different levels of cleaning and maintaining a service weapon: a field strip and a detailed strip of the firearm. A field strip only requires you remove and service the main components while a detailed strip requires the entire weapon be disassembled and serviced. Each weapon is different and will have, while similar, different components that pertain to the respective level of maintenance. I find that the order of component priority can be categorized accordingly when it comes to a service rifle,

In this order a firearm can be maintained in accordance with its situational needs and restrictions.

A firearm’s sights are the difference between an effective weapon and a paperweight that makes a lot of noise. Unless it’s an extreme close quarters gunfight, you’re going to need the use of your sights. They are a professional warrior’s difference between life and death. Taking the time to inspect and maintain a rifle’s sighting system is absolutely top priority for this reason and should be done above all else. Luckily this can be done on the fly and is an easy process if nothing requires physical repair.

Your operating system’s specific components will be anything that pertains told the function and operation involving the cycling of the firearm. So the BCG, gas system parts, and barrel fall into this category and should be cleaned first and foremost to prevent future malfunctions. This is where field stripping the weapon comes into play and is a routine process for a combatant worth his salt. It is here where we scrape the heaviest deposits of carbon away and clean out the internals, hastily if the situation demands it.

The bolt carrier group is essentially the heart of a rifle and suffers from the majority of the stress, regardless of operating system. These should be disassembled and cleaned thoroughly whenever applicable. If the BCG is not maintained it could, again, result in a malfunction that cost precious seconds in a firefight. If the malfunction is bad enough, the rifle could cease operation and that takes the end-user out of the fight; that’s not good.

The barrel of a gun, while doing most of the work involving the bullet, does not usually require the upkeep that most main components do. The majority of modern service rifle barrels are built using insanely high quality steel and are coated in a corrosion-resistant substance, usually a chrome lining if it adheres to mil-spec standards but melonite, nitrite and other methods are becoming popular in the commercial market. The bore punch is the tool for the job here; using the bore brush attachment, the barrel should be initially scraped with cleaning solution. After that, the eyelet is attached and a cleaning swab is pulled through the barrel several times until the lining has reached an acceptable condition. The chamber should be scrubbed using a brush as well. A bore snake makes this whole process a lot faster, I’d add that they are definitely worth checking out.

From there you will want to wipe down all remaining components, especially the main spring and/or buffer system. The fire control group plus selector switches and magazine releases should be cleaned next. While you do these things, you may as well wipe down the inner receiver walls before reinstalling anything.

Lastly, magazines are a highly overlooked component that have to be properly maintained. The only reason this is at the bottom of the list is because it is incredibly labor-intensive to disassemble and thoroughly clean magazines in comparison to field stripping a service rifle. Ammunition must be removed and it does not need to be done as frequently, depending on your operational environment so it is at not prioritized. Nonetheless it is absolutely essential and without a properly functioning magazine, a service rifle is damned near useless.

A USGI standard issue magazine (soon to be phased out by the PMAG).

Follow these steps while considering the disclosed information here and I can guarantee, you will have a rifle that will not let you down because of negligence on your part. A Marine’s rifle is his life and without it he is useless, as the creed goes.

*Originally published on NEWSREP and written by Kurt T