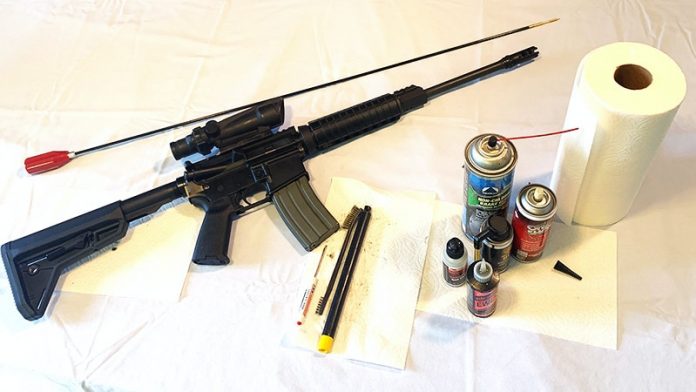 Maintenance and cleaning of a firearm will extend the life of your gun and increase its overall reliability and safety. If you are new to the AR platform and need a little help cleaning it, then you’ve come to the right place. Today, we are cleaning the AR-15 and similar variants.

There are some variations from one model to another, so if you have any concerns, check the manual from the manufacturer.

Now that we have everything we need, it’s time to get our hands dirty. This is the very first step for a reason! Too many accidents happen when weapons are being cleaned so make sure ALL ammunition is removed from the rifle. Magazines and ammo should be moved away from your cleaning area — preferably in another room. Once ammo and mags are removed from the area, be sure to check the rifle’s chamber visually and manually before proceeding to the next step. Once the rifle has been confirmed clean, the bolt and hammer can be released. It’s important to do this step because the upper and lower receivers cannot be separated with the bolt back and hammer up. The bolt carrier should slide right out of the breech of the upper receiver. Be careful not to drop it and make sure no parts fall out as you remove it.

The charging handle is removed afterward by bringing it to the rear, then guiding the front portion of the handle through a designated wide spot to free it from the upper.

4. Clean the barrel and upper receiver Use a rag to remove grease and grime from the upper receiver, using caution when working near the gas tube so as not to damage or plug it. Remove any excessive carbon buildup you find along the way.

Install the bore guide into the receiver and put the upper receiver assembly in a firm and stable position. Using a solvent soaked patch, pass the cleaning brush through the bore of the barrel from breech to muzzle. This may take some effort depending on the friction generated between brush and bore.

Repeat this process until patches come out of the muzzle with no contaminates. Once the bore is clean, pass an additional patch — this time soaked in gun oil — to lube and protect the bore.

Use either a rag or chamber brush to clean out the chamber and barrel extension to free it of any carbon or debris.

5. Disassemble and clean the bolt carrier Inspect the bolt, spiral gas rings, firing pin, and cam pin for carbon buildup, excessive wear, or damage. Lastly, inspect the carrier itself for buildup or wear and tear. Ensure the gas tube screws are tight and still staked, if applicable. Once all parts have been cleaned and inspected, they can be lubricated with a light coat of gun oil on the contact points and reassembled.

Clean the charging handle with a rag and then lubricate with gun oil before reassembly with the upper receiver.

6. Clean and inspect the lower receiver With a rag, wipe out any excess grime from the receiver. The magazine well can get dirt and carbon in all the low spots so wipe them out as well.

Inspect the trigger mechanism — ensure all springs, keepers, and pins are still in place. Remove any excess lubricant or buildup. The trigger well is the low spot that will catch most of the crud that flies around inside the rifle during shot strings, so clean this area thoroughly.

Ensure the safety functions properly and remove any debris that could cause it to malfunction.

Inspect the magazine release for proper function and remove any dirt or contaminants that may inhibit its function. Do the same for the bolt catch, making sure it pivots freely. Clean any buildup and lubricate it lightly before reassembly.

Remove the buffer from the buffer tube by depressing the detent with a small tool. Inspect the buffer and spring for damage or contaminants. Remove any debris or buildup and wipe down the inside of the tube to ensure it’s clean.

Reinstall buffer and lubricate all points on the trigger assembly and any other moving parts you may have missed before reassembling the rifle.

7. Lubricate and reassemble the rifle Assemble the two receivers and hold tight against each other while pushing the takedown pins back into place. Now that the rifle is clean and back together, it’s important to function test. Check the safety for proper rotation to all positions. Pull the charging handle back to make sure it moves all the way to the rear with no stops or tight spots. Upon releasing the charging handle, the bolt carrier should slam shut completely into battery.

With the rifle still clear of any ammunition, point the AR in a safe direction and check the trigger function by pulling the trigger. Ensure the trigger resets properly by holding the tripped trigger to the rear and recharging the rifle. The trigger should reset.

If everything works as it should, the rifle is ready to put away.

After cleaning your AR-15, it’s time to store it in a safe, dry place. A gun safe with a dehumidifier is best, but anywhere that is secure with stable temperature and low humidity will do.

Ready to add to your AR collection? Head over to Guns.com and check out our extensive array of AR-15 rifles.