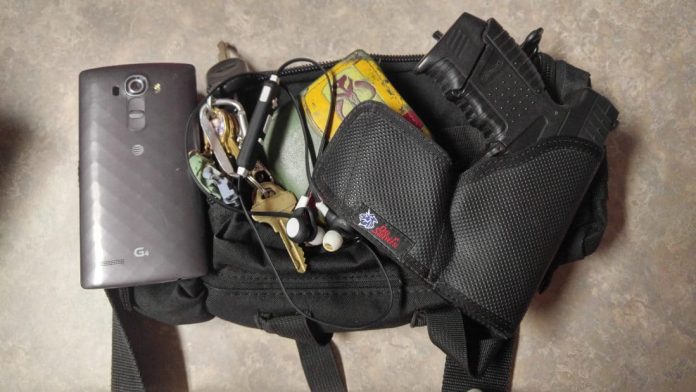 Life experience is often the best educator right? It can teach harsh lessons but they are worth learning. Recently I’ve started exercising and eating better. I run, hike, lift and eat more Greek yogurt than I thought was possible. When I started I knew I wanted to keep carrying while exercising. I experimented with a few different ways and had to learn from sough rough experiences. I want to pass some of that experience onto you.

Why I carry while exercising

This was a question my wife asked when I told her of my intentions. She knows I carry daily, but still was confused why would I see a need to carry while going for a run or lifting weights. It’s only an hour or two a day right? What could really happen? Well in my opinion during exercise you are quite vulnerable.

For one, you are likely going to be in some form of fatigue. If you’ve already ran a mile or two and are feeling it, how fast could you get away from a violent situation? If my body is exhausted from lifting weights how effective will I be in a physical confrontation?

Most people exercise in the early morning, or the evening. Depending on where you live you are likely going to be alone, without many people on the streets to help you in a bad situation, even if they would. So if it’s a little dark and you already tired from working out, and likely listening to music you are cutting off a few of your senses. I want a gun if this is the case.

Personally I live in a rural environment, I literally run down a dirt road and I never see a soul. What I do see is lots of awesome wildlife. If I get out there early enough I often catch sight of a Doe and her two fawns, I saw a Bald eagle once, and tons of rabbits. I see coyotes all the time coming home from work at night, I’ve had to chase away aggressive half starved hunting dogs ripping my trash apart, and I’ve dispatched three cottonmouths this year.

I’m not messing around with these critters, I’m not gonna risk life and limb hoping I can fight them off.

The first thing I discovered was that traditional holsters aren’t going to work. I’ve run short sprints, and fast jogs with all types of different holsters and never had an issue. The big difference comes from what we look at as workout gear. I wear a simple pair of loose shorts and a t shirt.

Any shorts loose enough to workout in comfortably aren’t going to support a gun carried IWB or OWB. So what about a shoulder holster? That would require the use of a top layer, so a light windbreaker wouldn’t be bad right?

Well unfortunately shoulder holster start to suck when you start to run, they rub you raw pretty quickly, so I shelved that idea. Next, what about a belly band? Throw it under the shirt, make sure it has solid retention and I’m good right? 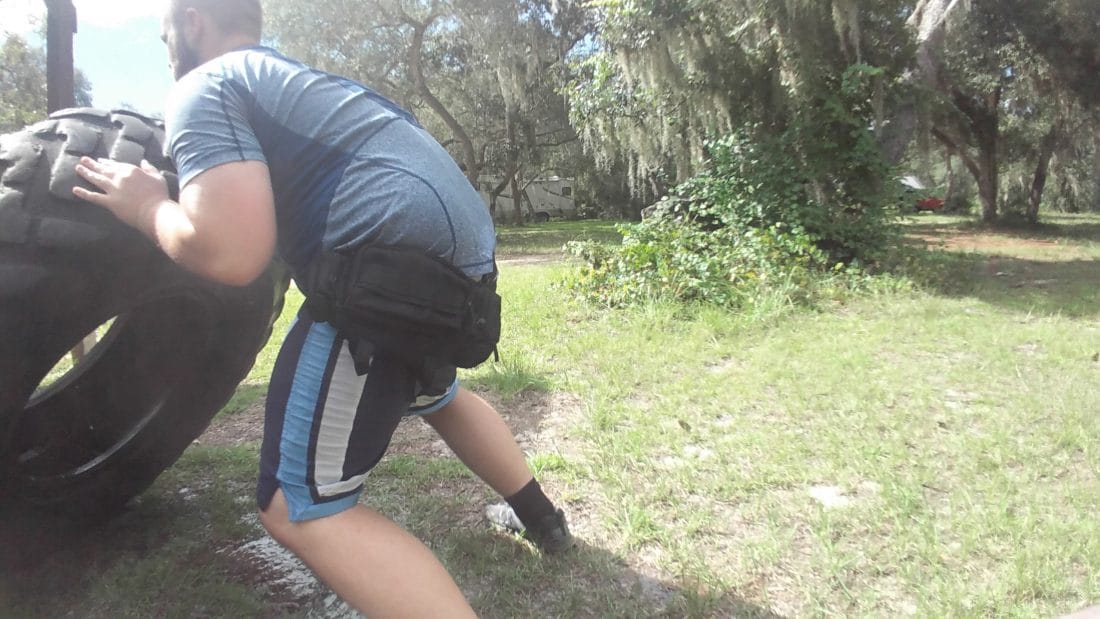 Well, first the gun is going to super exposed to sweat, an absolute ton of it. That’s not great but you can clean a gun. The belly band also rubbed pretty badly and would constantly ride upwards as I jogged, effectively putting the gun right under my chest. This would be impossible to draw from quickly and easily with a shirt soaked in sweat. Also in the gym, my shirt would often come up as I exercised, exposing the gun to anyone observant enough to see it. So I shelved that idea.

A fanny pack. Yes, a fanny pack. I did replace the waistband with an over the shoulder strap, but it’s still a fanny pack. It’s absolutely perfect for carrying my gun, a reload, my wallet with ID/CCW permit, and a water bottle. I keep the gun inside a simple Desantis pocket holster inside the fanny pack. This just ensures the trigger is protected which is a cardinal rule to concealed carry. 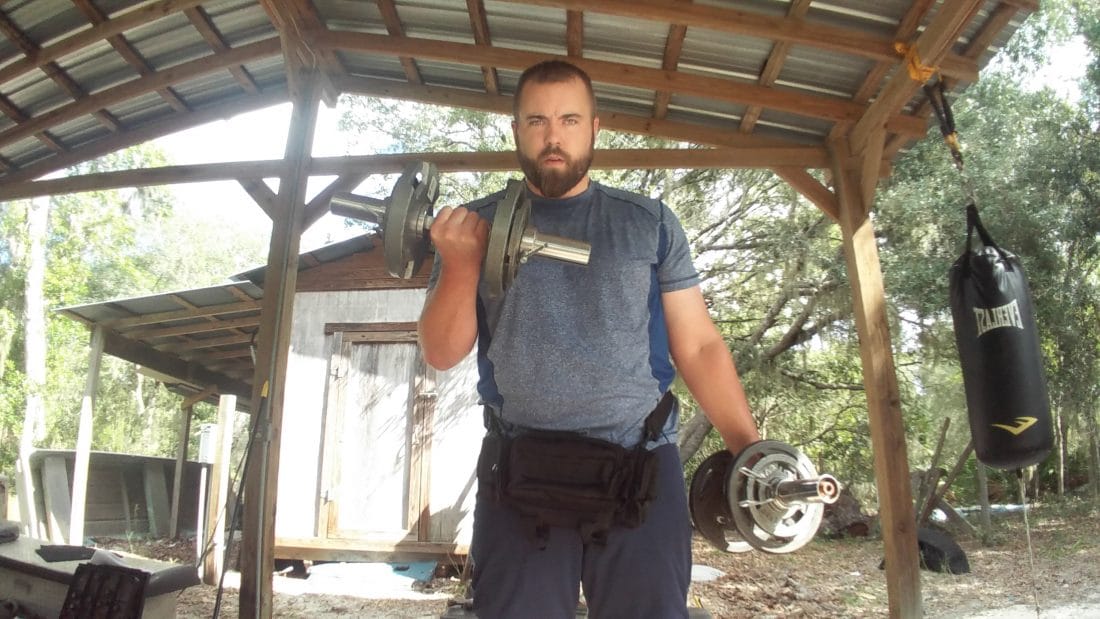 A fanny pack, with a shoulder strap is basically a purse, but I’m okay with that. It doesn’t bother me when I run, hike, or lift weights. Unlike a holster I can move it around my body when doing different exercises. It’s completely accommodating. It’s also completely concealed, protected from bumps, falls, and sweat, and I have zero worries about retention.

When it comes to circuit style workouts like HIIT or Crossfit I can simply add the waist strap and do burpees til I puke without issue. I suggest both a belt and strap model 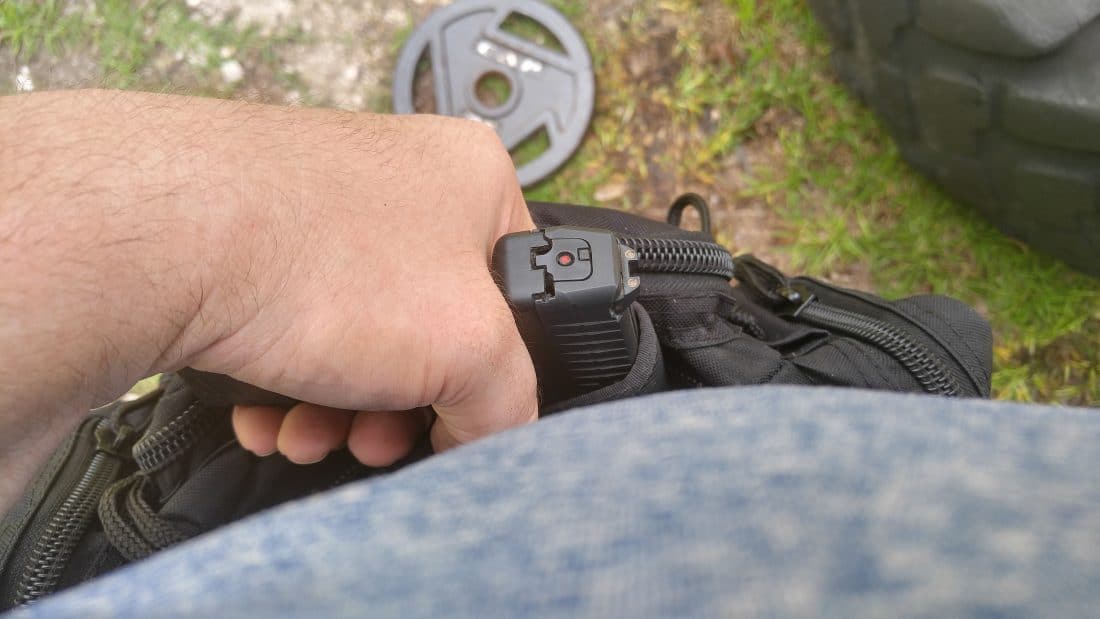 I just wrote an article on why I carry a full sized handgun as my gun of choice for concealed carry. Unfortunately, when you start working out your weapon selection is a bit limited. Concealing a full sized gun simply isn’t going to work with 99% of people trying to conceal carry, including me. So I’ve been carrying a Walther PPS 9mm. It’s a lightweight, single stack handgun. 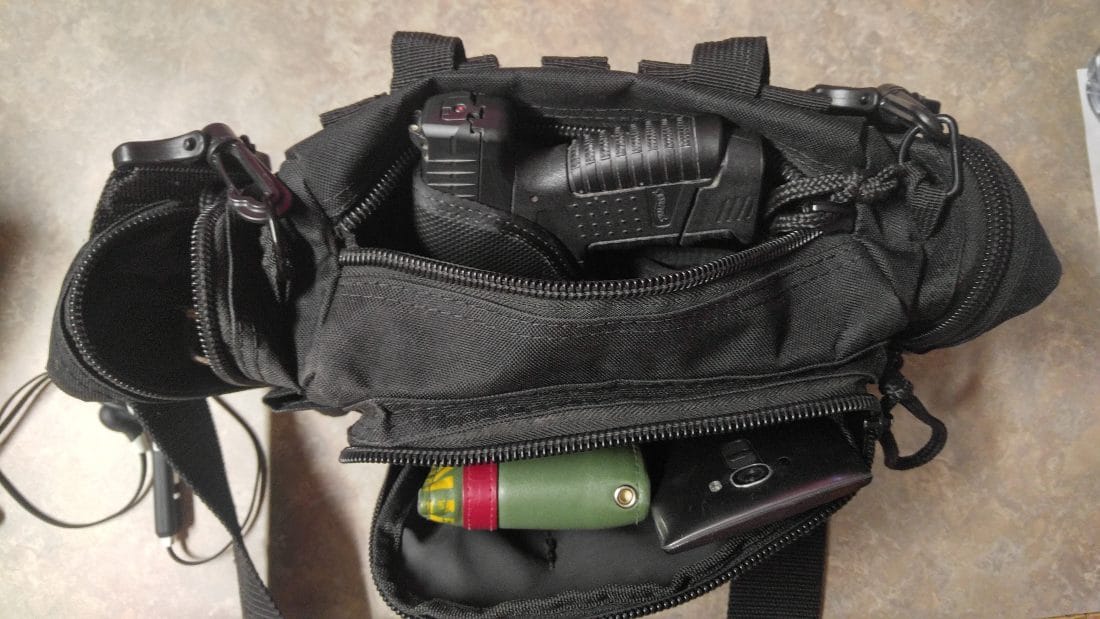 Since I can’t use a traditional holster and I’m running, jumping and diving everywhere I want to ensure nothing makes that trigger move. This is likely me being over paranoid, but it makes me comfortable.