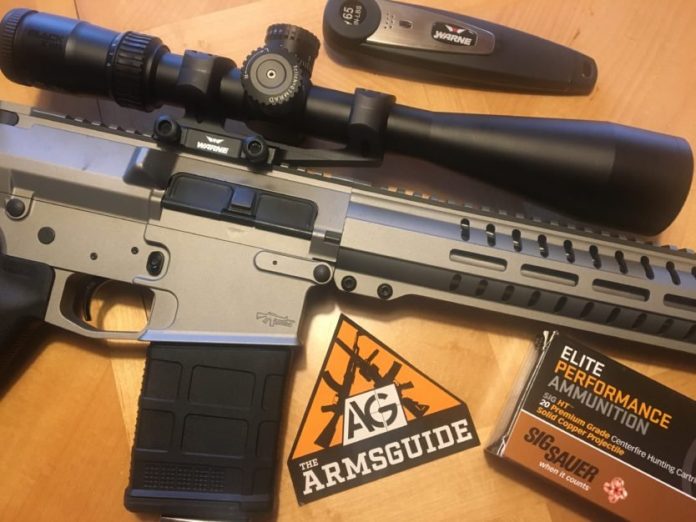 Back in the 1950’s, Eugene Stoner designed the first modern modular rifle, the AR-10. The gas impingement operating system and buffer system offers a potential optimization which has yet to be completely fulfilled. If you want to build a .308 AR, let’s examine the easiest way to make your gun run, choosing the right buffer and spring combination for your gun.

Imitation being the most sincere form of flattery, since then a lot of people made their own versions of Stoner’s masterpiece. Today, there are a lot of great .308 ARs out there. Wither you got a new gun in a box or finished an 80% lower, there are some things you need to know. The guys that make parts for .308 AR rifles like standards so much, they created  a bunch of them. Not only do you have to get parts that fit, you need a rifle that runs.

The availability of quality matched receivers from companies like Tridentis and the popularity of 80% receivers have got a lot of people putting together do-it-yourself “Franken” ARs. I love the educational aspects of this and the amount of new freedom created. The problem is that without basic understanding of how the rifle functions, you could end up with an expensive door stop.

The AR is great in all its manifestations, but to be fun, guns have to shoot every time. If we understand how the combination of components affects function, we can get that great reliability that made us love ARs, increase the service life and reduce felt recoil.

If you have worked with the AR-15 family of rifles, you are accustomed to general parts interchangeability based on military specifications. The various manufacturers of .308 AR rifles had no such standard; they made changes to put their own brand on them. For a home-builder, it means you can’t buy parts without doing some home work. Ask me how I know this.

There are three basic patterns of .308 ARs: SR-25, Armalite and DPMS. To make this even more confusing, there are variations on these patterns which combine the features. Even proprietary receivers like the LWRC REPR .308 rifles still has some common parts. For the same reason that IBM clones grew to rule the computer market, most .308 ARs use DPMS parts and dimensions. 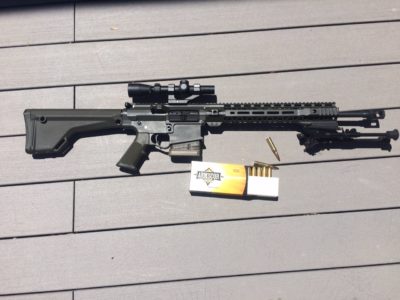 Pictured is my home assembled DPMS pattern .308 AR.  I made a few mistakes and bought some parts I couldn’t use because of compatibility.  Learn from my mistakes.  The things I did right?  Faxon barrel, Tridentis upper and rail, Magpul stock and  Lancer mags.

Buying parts and then checking compatibility is expensive.  308AR.com has a very helpful information on   308 AR Compatibility taking the guess work out of internet shopping.

I bought an SR-25 back before they were cool. At the time, the 24” barrel and the slick synthetic float tube were awesome, but as we entered the second decade of a new century, I wanted a 16” barrel and some rails. A guy locally had a 16” LMT barrel for sale, I bought it. When I went to find an SR-25 upper, I found out that Knight’s Armament won’t sell them and that an LMT barrel won’t fit any way. I a kind of blind luck that disproportionally finds Green Berets, I ran into another guy selling an LMT upper, then found out that an LMT Modular Weapon System upper fits my SR-25 lower. Problem solved, or so I thought. The gun fired and had good accuracy (Thanks LMT) but it would only fire the first round and refuse to chamber a second 50% of the time even with new Lancer mags. The SR-25 buffer is a very light weight nylon plug. It was not doing the job with the LMT upper.

The middle of the story is everything I had to learn to write this article. The happy ending is that I got ten glorious ounces of AR10R-XH buffer from HeavyBuffers.com. Paired with the “Green” full length spring from Sprinco, I got complete reliability and less felt recoil. Shooting the same gun, first with the OEM buffer and then the AR-10R-XH buffer at 200 yards on a 8” X 8” steel plate, my split times were reduced by 25% due to faster recovery from recoil. Problem identified and solved. Hopefully, you are smarter than I am, and you are reading this BEFORE you build a gun.

Which buffer and spring should you use in your rifle? That depends on your buffer tube, gas system length, the gas port size, ammunition, and if a suppressor will be utilized. I can recommend some solutions, but with all these variables, some experimentation is required. In fact, you might need more than one buffer and spring combination if you plan to change uppers or ammo.

I have seen many ARs of all calibers falter because of ammunition.  I recommend the use of high quality factory ammunition like Armscor .308.  You might get a deal on surplus ammo, but don’t blame your gun if it doesn’t cycle.  You can tune a gun for weak ammo, but you better re-tune it if you shoot the good stuff.

If you pick a buffer that is too long, or a buffer tube that is too short, your gun may pass a manual function check, but hand cycling doesn’t replicate the forces acting on the rifle during firing. The bolt carrier may eject a cartridge and lock on the back of the magazine follower instead of the bolt catch. The bolt will release properly when you press the bolt catch. This is confusing and irritating when you go to the range.

The first round will load and fire normally, but after ejecting, the bolt will not load a second round from the magazine. The bolt will be forward with the chamber empty. The bolt doesn’t move far enough back against the buffer to strip a new round from the magazine and chamber it. This what happened to me intermittently until I changed my buffer and spring.
If you buy a complete gun, chances are the manufacturer did the homework for you, but if you add a suppressor, change uppers or use non-standard ammo, you need options.

Springco has designed a new series of ultra high density co-polymer spacers which will soon be available on their website. They will permit the use the many weighted carbine buffers and Sprinco “Red’ and “Orange” springs in your .308 rifle length extension tubes to provide many different combinations to match your particular applications.

Most manufacturer’s use Delrin for their spacers, which will eventually deform. Aluminum spacers are louder and cost more. Sprinco’s proprietary co-polymer retains energy absorption properties yet is tough enough to maintain shape through extensive use. One spacer will net out the effective depth of the AR-10 pattern receiver extension (Armalite, Noveske, LMT, etc.) so you can use standard length 3.25″ carbine buffers. There a model for DPMS pattern .308 carbines using the M4 extension tube and 2.5″ carbine buffers. They also have a couple of spacers for the VLTOR A5 which will allow the use of hydraulic carbine buffers or regular 3.25″ carbine buffers.

The “Orange” spring may be used in either pattern rifle, but the “Red” spring can only be used in AR-10 pattern extension tubes. THE “Orange” spring is recommend with LMT’s (which are pretty highly gassed), and other builds when suppressed. This gives you a broad choice of weights Along with these two offerings,

Finding the correct buffer and spring will result in a high functioning rifle with an extended service life. You can choose a lighter buffer to reduce lock time and increase cyclic rate. A heavier buffer will keep the rifle in battery slightly longer reducing bounce and transfer more inertia to the bolt providing reliable chambering when dirty. Adjusting buffer weights can accommodate different ammunition or reducing the recoil impulse. A heavier spring with a properly tuned gas system can often yield a faster, lighter impulse that feels almost like an AR-15, very easy to clear or load.

Experimentation will allow custom tuning of any given rifle. Original manufacturers .308 AR springs and buffers spring should offer good performance over a wide range of configurations, but if you have any reliability issues, why not check a different buffer weight or spring? This alone can yield truly optimized performance, particularly for rifles without an adjustable gas block.

In selecting a spring for your rifle, install a heavier spring if you feel the buffer head fully compress and bottom out while firing the weapon. If the bolt carrier will not lock back reliably on the last round fired, even when completely gassed (in the case of an adjustable gas block), select a lighter spring.

Get this right, and your great grand kids can be shooting giant mutant rats from post apocalyptic radioactive rubble with these rifles. Got a carbine?  Find your answers HERE.

What about .308 ARs with carbine length buffer tubes? That is a whole other article coming out soon.