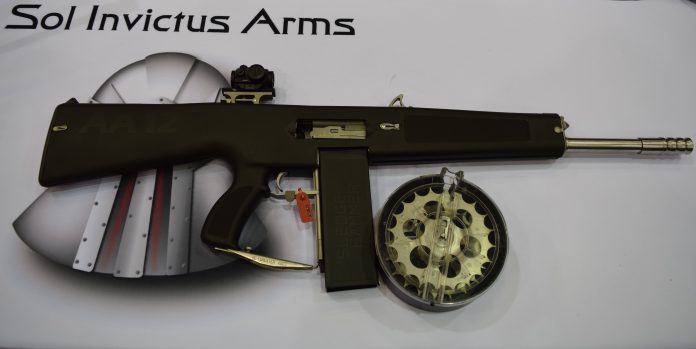 The AA-12 ships with one 20-round drum magazine. (Photo: Daniel Terrill)

The AA-12 has graced the screens of video games, movie and television appearing on Call of Duty, Modern Warfare and Grand Theft Auto as well The Expendables, G.I. Joe and even the AMC breakout Breaking Bad. Though its recognizable design has been a staple in military and warfare entertainment, the design has a history steeped in difficulties.

The creators of the AA-12 shotgun have fought an uphill battle for decades trying to bring the gun to the consumer market. Finally, after 30 years, the AA-12 is finally ready to wage war on consumers. The design first began its transition into the marketplace in 1987 after Jerry Baber bought the rights to the gun from Max Atchisson. Baber handed the idea over to Bill Stiles and Boje Cornils to bring it to fruition. Stiles and Baber were well acquainted and Stiles boasted a background in materials, a skillset Baber thought would make him useful to the project.

Stiles enlisted the help of German-born engineering and machining expert Cornils who brought mechanical know-how to the project.

“Boje Cornils is actually the true architect of what we know as the AA-12 today and co-owner of the weapon; taking nothing away from the contributions of Max Atchisson and others. Mr. Cornils is the only person who really knows how the parts interact with each other,” wrote Benjamin Worthen, who penned a history of the AA-12 on Sol Invictus’ site. 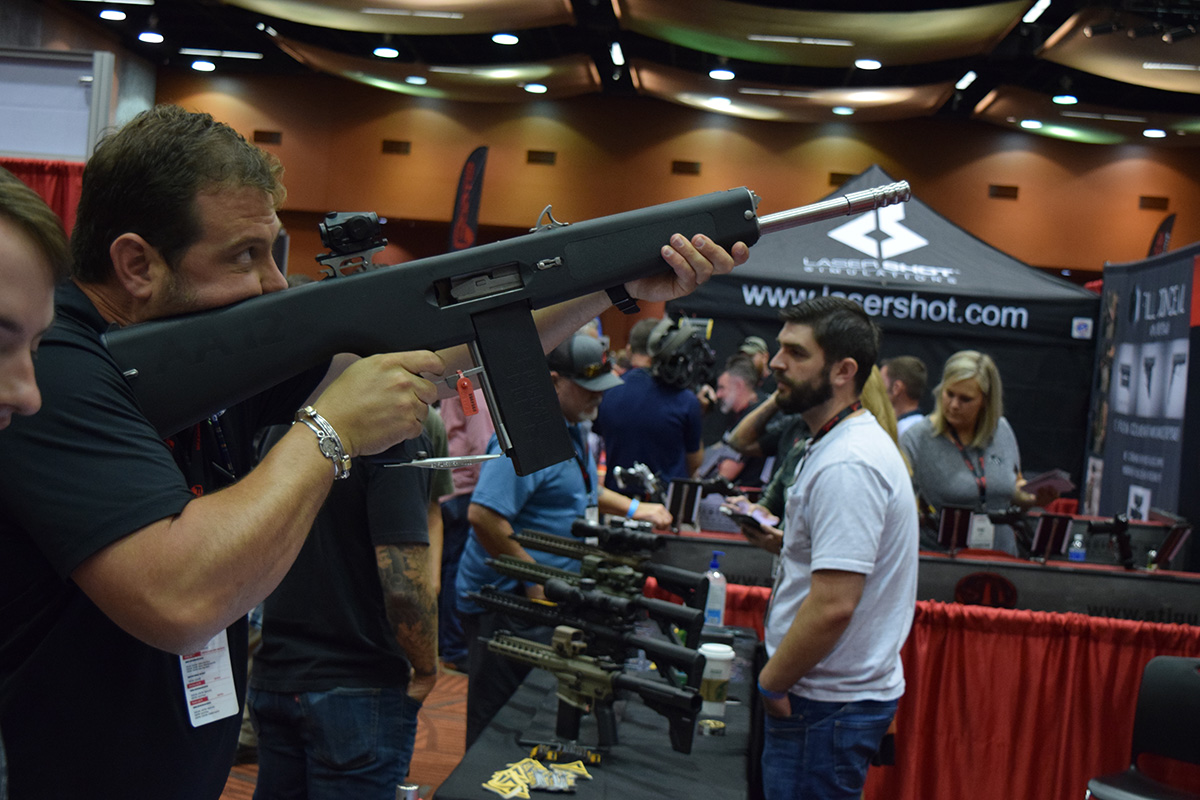 The AA-12 shotgun made its first consumer debut at Triggercon in 2018. (Photo: Daniel Terrill)

Stiles and Cornils set out to create the AA-12, but the project soon stagnated due to disagreements on materials. Ultimately, the shotgun project would be at a standstill for eight years, before Cornils finally got the AA-12 back on track. Putting in tireless hours with well over 100 revisions during its 18 year development, Cornils finally perfected the full-auto design. The full-auto, open bolt AA-12 relied on a redesigned gas block design, one that was created and patented by Cornils to ensure reliable performance of the shotgun.

“The whole process involved overcoming design flaws which proved to be insurmountable without Boje, but, finally, the AA-12 was ready for prime time,” Worthen said.

Once completed, Baber took the lead on marketing efforts shopping the shotgun to the military exclusively. In what was described as “an ever-evolving grand vision for the AA-12” Baber mishandled the marketing ventures, according to Worthen, angering military officials and effectively ending any chance the gun had at serving alongside military members.

When the decision to pursue a civilian variant of the AA-12 shotgun was made by Cornils, Baber decided to exit the project completely thus turning it back over to Cornils. At the age of 84 and with the help of his wife Dotti, Cornils began reaching out to companies for help on the AA-12 consumer revival. Florida based Tactical Superiority and its subsidiary Sol Invictus Arms leapt at the chance to bring the AA-12 to life, taking over the project and tweaking it for civilian use. 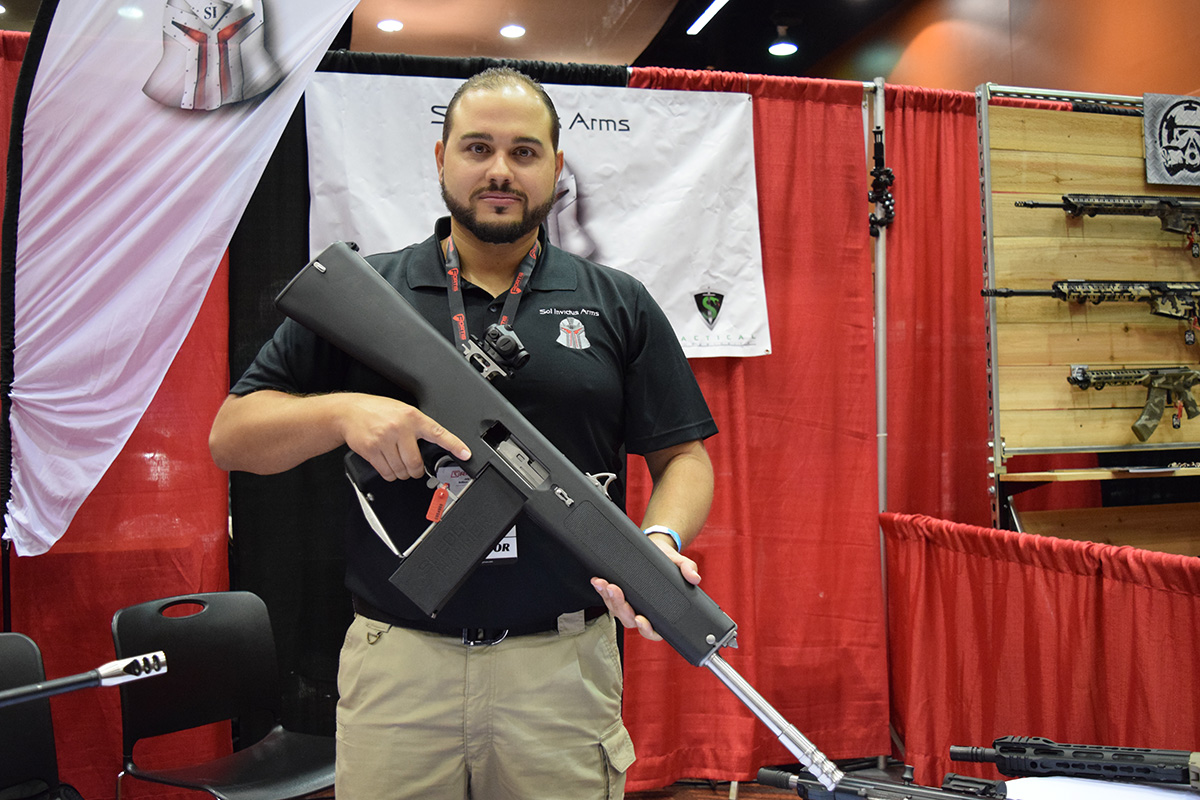 Aside from its transition from full-auto to a semi-auto design, Sol Invictus Arms intends to launch two separate models — the original with tall sights and a second version with rails for optics/accessories mounting. Both models will be accompanied by a single 20-round drum magazine.

“We’re proud to be a part of the legacy of the infamous AA-12 Shotgun and happy to be able to bring a civilian version to market,” Michael Conn, President and CEO of Tactical Superiority, Inc. said in a press release.

The AA-12 has seen its fair share of stumbling blocks on the road to civilian release, but it appears as if its unique and innovative design will finally make its way into consumers’ hands.