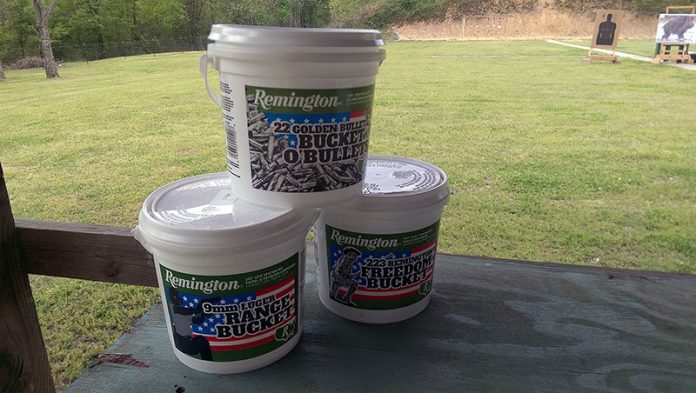 Make a crap ton of ammunition in popular calibers and throw it in a bucket, gosh darn it. That sounds like freedom to me.

Well it also sounds like freedom to Remington, which has just released several new ammo options for just about every kind of shooter out there. Whether you’re a competitor, range plinker, concealed carrier or sporting tweed at the clays range, Big Green now has an option for your customers to feed their irons.

The most eye-catching new product from Remington’s Lonoke, Arkansas, ammunition plant has to be the new line of “buckets” chock full of ballistic goodness. Remington has redesigned its popular “Bucket O’ Bullets” in 22 LR, stamping an American flag in the background. But now the company sells a “Range Bucket” of 9mm Ruger rounds and an even better “Freedom Bucket” of .223 ammo — complete with American flag and Revolutionary War minuteman in the background.

Remington has also relaunched its former Golden Saber line, renaming it “Ultimate Defense” for concealed carriers and self protection. And the company now offers this deadly round in 9mm, 45 Auto, 40 S&W and 357 Magnum. All come in boxes of 20 and are priced at around $23.

For the shotgunners out there, Remington has just launched a line for gamers dubbed “American Clay and Field.” In the “good-better-best” argument, as one Remington engineer told us, this is the “better” line of shotgun ammo for shooters who take their clay and small bird hunting seriously, but not enough to go high end on what they’re throwing up there. We’re talking 1,200 fps velocities on 12 ga. rounds with a 4% antimony.

And pig hunters will squeal over Remington’s new Hog Hammer 000 Buck (1,325 fps) and 7/8 Slug (1,750 fps). The 000 Buck is interesting as it contains high antimony lead shot that’s copper plated, which shows well over 12 inches of penetration at 15 yards into ballistic gel — enough to make plenty of bacon even on the toughest hogs.