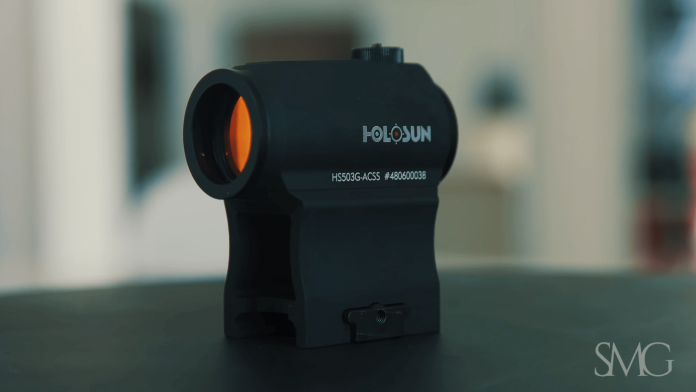 Holosun is a company known for making quality optics for those on a budget. The Holosun HS503 has the body of the Aimpoint micro, with the outer circle reticle of an EOtech with an inner bullet drop reticle. The outer circle reticle can be turned off it so suits you. With so many companies doing the same thing it’s a fresh approach to red dot optics. The Holosun HS503 sports a 50k hour battery life with an 8-hour shutoff feature. The dot has been reported to be extremely bright and crisp. Another attractive feature is the price. With so many optics sitting at 400 plus dollars the Holosun feels like a relief coming in at around half that at 219 dollars.

SuperSetCa, the man the myth the youtube mogul has produced an excellent review on the Holosun HS503G Red Dot ACSS a couple of months back. If you aren’t familiar with SuperSetCa he is a 3-gunning guru with a penchant for reviewing optics fully. Besides having a particular proclivity to reviewing optics he happens to be a magician with a camera. What you get are well thought out and produced videos that tell you what you need to know in a short time frame.