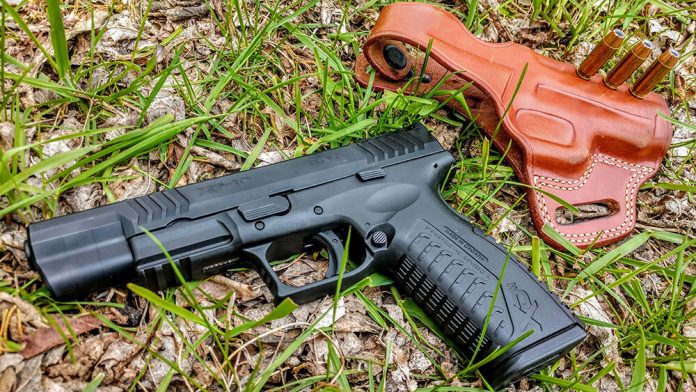 Pigs have become invasive throughout much of the United States, damaging farm land and running off native wildlife that many land owners would rather not see leave. What has been one man’s problem has conversely become another man’s pursuit. The sport of hunting pigs is a burgeoning one with ever more hunters looking to fill tags and their freezers.

For folks from much of the Midwest like myself, we thankfully have not been overrun by pigs, but still would like the thrill of that type of hunt, and honestly, who doesn’t love bacon? So I booked a hunt with the good folks from Big Oak Elk Ranch in West Union, Iowa so I could bring home the bacon, too!

To do a pig hunt where you are on the confines of a game farm, yet dealing with a wild animal, I did not want to bring the entire kitchen sink with me on my hunt. I decided to challenge myself by using a handgun for the hunt. Beyond that, three decisions for gear had to be made: firearm, holster and ammunition.

I chose the Springfield Armory XD-M Competition 10mm because of its sighting radius, match barrel, magazine capacity, and stopping power. “Which is the best handgun pig cartridge?” could be argued until the cows come home, but there is no denying the strength of the 10mm Auto. The Galco holster was something well-worn that I already owned, and the Federal ammo was a no-brainer for its 650 ft-lbs of energy.

Preparation for the Hunt

The recoil of a 10mm is likely more than most of us who constantly shoot 9mm or .22 LR are used to, myself included. However, it is something very manageable in the Springfield Armory XD-M Competition 10mm. I shot roughly 50 rounds of American Eagle FMJ to refamiliarize myself with the recoil and to sight-in my XD-M out to 20 yards. I made this a slow, concerted exercise and felt very confident leading into the hunt.