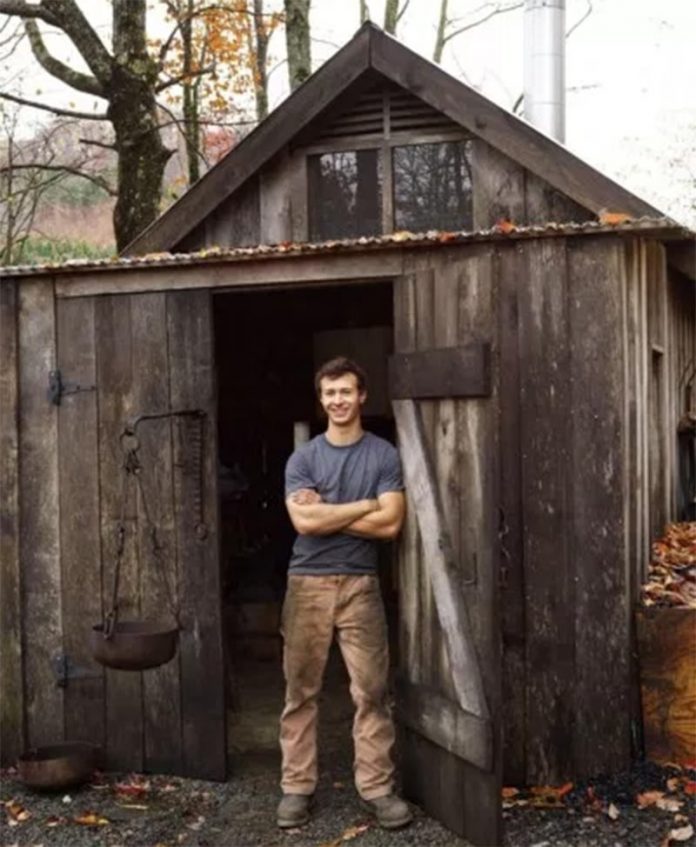 Deep in the Blue Ridge Mountains of North Carolina, lies the small town of Newland, home to a young man who has devoted his life to keeping the art of blacksmithing alive. What sets this young blacksmith apart from those many others helping to do the same in shops around the country is, Liam Hoffman just may be the next true blade master of our time. From the age of 13, Liam taught himself to move steel through heat and hammer. By the time he reached the age of 19, his skills were strong enough to catch the eye of those in charge of the popular TV show on the History Channel called, “Forged in Fire”. This show weekly features top blade makers from all walks of life picked to compete in building knives under time and pre-determined specifications in hopes of winning a check for $10,000. In 2016, Liam competed on one of the show’s highest rated episodes and took home the grand prize after beating out 3 other skilled competitors to become the show’s youngest winner ever!

As a huge fan of “Forged in Fire” as well as a native North Carolinian prior to our move to FL just a few years ago, I decided to reach out to the Hoffman Blacksmithing shop after a great conversation with one of the show’s judges, Doug Marcaida. I won’t get into all the details of my private discussion with Doug, but basically it recognized Liam’s talents seem to be well exceeding his journeyman title as a blacksmith and more along the lines of top names in the industry. The only difference being, most of those top names have taken over 30 years to get to where they are in their craft and Hoffman is now, 20 years old and still getting even better!

Once I contacted Liam, we spoke at great length about the industry, his journey thus far in it, his experience with the show and most importantly, life after winning the competition. To my delight, Liam is a lifelong bushcrafter having grown up in an artistic and very supportive family. It didn’t take long to decide on doing a project together that would fit well with our focus on high quality bushcrafting tools you can confidently trust your life to. Fortunately, Liam was about to start on another batch of camp axes very soon and would toss in an extra billet to construct mine.

Over the next few weeks, I kept an eye on the Hoffman Blacksmithing shop’s Instagram feed to see photos of Liam hard at work at the forge with cherry red billets of steel. Each day, he would post photos as the small blocks of 4142 chrome / moly steel took shape into 2.25 lb. axe heads. Once this was completed, detailed images of Liam hand carving each 19” handle out of local North Carolina Ash. This process of handmaking all aspects of the camp axe before properly hanging the head to the handle takes time and skill that few others can devote to crafting such fine tools.

In less than a month, my new camp axe arrived for review. As I unboxed the axe, the first thing I noticed with the deep markers mark stamped into the right side of the head proudly displaying Liam’s initials, his home state of NC and that it was made in the USA. Covering the “bit” or edge of the axe was a beautiful handmade sheath made from thick USA vegetable tanned leather. From the rivets to the burnished edges, everything about the sheath was very impressive down to the easy to fast snap that holds the axe in place.

Once the sheath was removed, the axe looked as if it belonged in a museum. The sides of the axe on either side of the “eye” in which the handle goes through the axe, were rough textured and displayed hammer markers down the “cheeks of the axe in contrast to the high polished areas to show off the fact this was handmade. The edge was razor sharp and cleanly sliced through a sheet of paper after shaving hair off my forearm. The “pole” or rear of the axe, sometimes referred to as the “butt” was squared and polished for use as a hammer for pegs, stakes, poles, etc. The head itself was very symmetric and each side were perfectly matching in appearance.

The Ash handle was just as impressive as the axe head knowing it was all hand carved. As I admired how the handle curved down to the well-crafted knob, it was clear Liam has taught himself how to be a top-notch leather and wood worker as well as blacksmith. One of my pet peeves about commercially produced axes has always been the lack of options for gripping them. Some companies either add rubber to the throat of the handle or ill placed scales that limit how high you can choke up on the axe. The Hoffman camp axe’s handle allowed for heavy swings using a low grip using the knob to anchor the grip or a high grip just under the head for more detailed work such as carving, splitting kindling or hammering pegs.

As with a lot of our gear we receive for testing, it was quickly off to the bushcrafting area of our private training facility, The Swamp. Packing the camp axe along with gear on my day pack from First Tactical was no problem due to the 19” handle. I found it to be compact enough to not catch on foliage and other gear but still long enough to give me more than enough leverage for heavy chopping. During the initial trip and several follow up occasions to work with the camp axe, I was very impressed with how well the axe performed. The axe made short work out of small trees under 6” in diameter as well as cleaning branches off to make poles, stakes and toggles for use with cordage. Much of the timber was split and used as fuel for small camp fires.

I noticed during heavy chopping, the camp axe cut deeper than a lot of axes I have previously used but did not “stick” after the chop as I would have thought. I consider this to be a product of two specific things, the first being the cheek angle of the axe’s head to be thin enough to cut but thick enough to keep a wide enough wedge for retrieval. Secondly, the razor-sharp edge bit direct from Hoffman’s shop. If there is a sharper knife, axe or other hard use tool that ships from the manufacturer, I have yet to see it in my years doing reviews. If a sharp blade is a safe blade, you can’t get much safer than this axe. Between trips to the testing grounds, I kept the edge honed and oiled myself but once I see performance drop off, it will be sent to my good friend, Simon Michael at Atavistic Edgeworks to professionally sharpened to the high quality he has done with all of my blades over the past two years. I can see this axe easily outlasting me and my needs well into the next generation it will be handled down to.

Priced at $300, this axe is not for the diehard Gerber or CRKT axe fan. Liam builds axes for those who understand the value of a hand built tool that you can use hard and still pass down to your children and grandchildren. Several seasoned axe users, including myself have noticed advantages and design improvements over top axes in the market including Hults Burk, Gransfors Burk and Wetterlings after using the Hoffman Camp Axe. This is no slight on the traditional big names of the industry, just recognition of how Liam has taken into account for his and other American preferences such as what is sometimes considered a “high centerline” as opposed to flatter angled “cheeks” as those found on the Gransfors Burk axe. Overall, to categorize this camp axe, it’s definitely a “chopper” but can perform “wood splitter” for camp fire needs very well for its size. My perfect load out for a weekend of bushcrafting would be a smaller, high quality utility knife such as those made by Two Rivers Knife Co and the Hoffman Camp Axe for all my medium to heavy use needs.

During my time reviewing the Hoffman Camp Axe, I found Liam to be a professional in the truest sense. Unlike most found on YouTube, Liam’s channel prefers to let his work do the talking for him. It is clear Liam Hoffman is just an old soul in a new body who still believes in the art of steel and fire. After getting to know Liam better and spending time working with one of his handmade creations, I couldn’t help but feel like this is every much the same opportunity as if I was able to travel back in time and meet a 20 year old Ernie Emerson or Gil Hibben. If you are in the market for a quality, handmade tool you could bet your life on, I highly recommend having Liam Hoffman build your next knife or axe. This is one blade maker that will be fun to watch as his skills continue to grow with his business over the next 20 – 30  years!