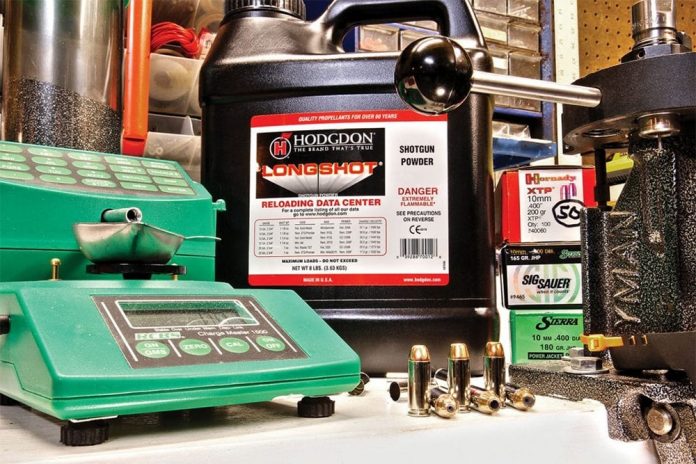 Hodgdon Longshot powder was developed primarily for waterfowl hunters who needed to propel heavy shot charges at really high velocities. It accomplishes that task well, but has been largely overlooked by handgunners, especially handgun hunters who need all the velocity they can get with heavy-for-caliber bullets.

I favor bullets with high sectional densities—that is, heavy for caliber—for both hunting and personal defense. A bullet’s sectional density (SD) is its weight in pounds divided by its diameter squared. Therefore a 200-grain 10mm bullet has an SD of 0.179. Because the bore diameter is fixed, a bullet can only get heavier by making it longer. So the longer the bullet, the higher the SD.

High-SD bullets have a much greater probability of fully penetrating deer, black bear and other medium game (and don’t forget bad guys), typically making a caliber-size entrance wound and a fist-size exit wound. An X-ring hit with a high-SD bullet traveling at maximum velocity has a much higher probability of creating a wound that will cause the animal to bleed out quickly (and it virtually guarantees the terrorist bastard an express ride to paradise). Even if you miss the X-ring area, a full-penetration wound may still put meat on the table (or on the flight to paradise).

Longshot is the handgun velocity champ when loaded with high-SD bullets in the following cartridges, whether used for hunting or personal defense. Data in the two charts below shows the velocities/energies for Hodgdon’s published maximum charge weights for each cartridge/bullet combination. The first chart shows the highest SD bullets generally available for each cartridge.

My hunting and defensive pistol cartridge of choice is the 10mm Auto, and my every day carry gun is a Glock 29SF 10mm with factory 3.77” barrel. For dangerous game defense I carry a Glock 20 with either the factory 4.60” barrel or, more commonly, a Lone Wolf 6.00” extended barrel. Both of those pistols, and all three of those barrels, were used in testing for this article.

SAAMI maximum operating pressure for the 10mm Auto is 37,500 p.s.i., but most published data for high-SD 10mm bullets runs at pressures 2,500 to 7,500 p.s.i. below the SAAMI maximum. There is no SAAMI +P pressure rating for the 10mm Auto. The 10mm got off on the wrong foot after being adopted by the FBI. It was too much gun for most agents, so they downloaded it to reduce recoil (a/k/a the “FBI load”). Even though the FBI eventually dropped the 10mm, most commercial 10mm ammo available today approximates the FBI load.

DoubleTap and Buffalo Bore load their 10mm ammo to substantially higher velocities, and the rumor is they use Longshot to do it without exceeding SAAMI maximum pressure. With this in mind, I decided to carefully experiment with Longshot and mid- to high-SD bullets to see what I could get for velocities without creating any signs of over pressure.

Extreme overpressure can destroy your gun and kill you in the process. Signs of modest overpressure are flattening of primers and more than normal case head expansion. My plan to avoid mayhem was to use Hodgdon’s published maximum charge weights—which I’ve been safely loading for years with 165- to 200-grain 10mm bullets—and work up in 1/10th grain increments until any signs of overpressure were detected, then back down a tenth of a grain. All powder charges were weighed on a RCBS Charge Master 1500 dispensing scale, since metered charges can vary substantially.

For testing we used new Starline brass cases—top-shelf stuff that was dead-on SAAMI spec in all dimensions right out of the box. For bullets we used Hornady’s venerable 200-grain XTP, the legendary Sierra 180-grain JHP and Sig Sauer’s new 165-grain V-Crown (made by Sierra for Sig Sauer).

After firing each round during load development, the case was inspected under magnification for signs of over pressure, and the case head diameter and length were measured with an electronic caliper. As soon as any sign of overpressure appeared—usually a flattened primer—testing stopped, the powder charge was reduced by 1/10th grain and that became my maximum load for that bullet brand and weight. Sixty rounds were loaded with each bullet at its respective maximum charge weight, and twenty rounds were fired with each of the three barrels to obtain velocities and test for functioning. All fired cases were again inspected and measured for signs of overpressure, but they all looked fine, with no issues observed. No malfunctions of any kind occurred during testing.

The following chart shows the average muzzle velocities in f.p.s. and muzzle energies in ft. lbs. obtained with each load, fired from each barrel, as measured with an Oehler Model 35P chronograph.

The velocities obtained are virtually identical to the velocities for the same 10mm bullet weights and barrel lengths as those manufactured by both DoubleTap and Buffalo Bore.

Our derived maximum charge weights of Longshot have not been included in the table. That’s not an oversight­—it’s an intentional omission in the interest of safety. There are simply too many variables involved for us to publish these charge weights, including pistol and barrel quality and condition, chamber dimensions, barrel rifling type and depth, bullet design, jacketed vs. lead bullets, bullet jacket alloy, cartridge case quality and condition, primer selection and handloader experience.

To publish our derived maximum charge weights would imply they are safe to use in any 10mm pistol. Well . . . they’re not. They’re safe to use only in these two pistols and three barrels when loaded with the same brands and lots of bullets, primers, cases and powder used to develop these loads. We recommend that handloaders always begin load development at the recommended starting charge weights and work up from there. It’s a fun and safe project when you do it as outlined above.

For more information on the components used in this article, contact: