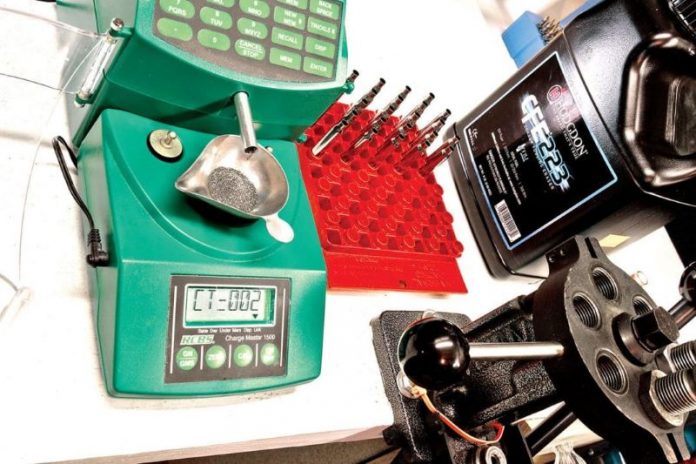 Missing a prairie dog because of a copper-fouled barrel is not a life threatening event. Missing a Radical Islamic Jihadist (“RIJ”) who’s shooting at you is.

Copper fouling is the deposition of copper jacket material on the lands and grooves of a firearm’s bore. It is accumulative, and builds up in thickness with every shot fired. All of the consequences of copper fouling are negative, and some are dangerous. As copper fouling builds up, accuracy goes out the window and chamber pressures increase, potentially to destructive levels. Copper fouling is the bane of all high-volume rifle shooters, especially those wearing our country’s uniform. When the fighting is hot and heavy, soldiers don’t have time to clean barrels. Recognizing all of this, the U. S. Army and its technology partners developed an additive for gun powder that greatly reduces the rate at which copper fouling builds up. What that additive is, and how it works, is not widely known outside the military, but Hodgdon Powder Co. figured it out because in 2012 they introduced CFE223.

CFE223 is a spherical rifle propellant that incorporates in its formulation what  Hodgdon calls “Copper Fouling Eraser” (CFE). In its marketing materials Hodgdon states, “This ingredient greatly deters copper fouling. It contributes to longer periods of top accuracy with less barrel cleaning time.” According to Hodgdon, it’s the same stuff the military added to its small arms propellants to reduce copper fouling.

On Hodgdon’s website there are photos of two new AR-15 Match barrels sliced in half lengthwise to show the bores. The captions state that one barrel fired 200 rounds loaded with CFE223, while the other fired 200 rounds loaded with “other propellant.”  The former appears to be completely free of copper fouling, while the latter looks heavily fouled. Hodgdon notes that CFE223 will not remove existing copper fouling, so its necessary to start with a clean barrel.

It’s not that we don’t trust Hodgdon—heck, I’ve known the whole family for over fifteen years, and they’re all straight-talking, conservative Kansans—but the proof is always in the pudding. If anything, we suspected that Hodgdon’s 200 round claim may understate the effectiveness of CFE223, so we decided to do out own testing to see how many rounds we could fire before accuracy was significantly degraded.

Before testing I was on a prairie dog shoot in Wyoming sponsored by Hornady and Howa, and I asked the guides and some of the guests—hunters all—their thoughts on measuring copper fouling without slicing the barrels in half. It all came down to loss of accuracy. Some folks said 2 MOA (2 inches at 100 yards, 4 inches at 200 yards, etc.) was their limit on medium to large game, while others could live with 3 MOA (3 inches at 100 yards, 6 inches at 200 yards, etc.), so we decided to split the difference at 2.5 MOA.

The test rifle was an Alexander Arms Incursion Carbine ($1,100; www.alexanderarms.com) chambered in .223 Rem. with a 16-inch chrome-moly barrel rifled at a 1:7” twist rate. Before testing the barrel was thoroughly cleaned with Barnes CR10—one of the most aggressive copper solvents we’ve tested—using stainless steel brushes and cotton patches.

We mounted a Nightforce SHV 4-14x56mm riflescope with illuminated reticle (www.nightforceoptics.com), and sighted it in at 100 yards. A 5-shot proof-of-precision target was fired, where the Alexander Arms turned in a 0.605” cluster about 1.5 inches low. The elevation dial was adjusted six clicks up and we moved on to testing. All sight-in and proof rounds fired were counted in the total round count.

We used a B27 silhouette target set up at 100 yards with the 2.5-inch diameter center of a TruGlo Tru-See splatter target pasted in the center. Once bullets started hitting outside that 2.5 MOA circle the test ended and the resulting round count was deemed the maximum endurance of CFE223 without cleaning. Called flyers (there was only one) were circled in red.

I have to say that the preparation and testing for this article was the most labor intensive of my career. Handloading 500 rounds of .223 Rem. took weeks of evenings, as every case was hand checked in a Lyman headspace/overall length gauge, every powder charge was weighed on an RCBS 1500 dispensing scale and every loaded round was run through a Lee Factory Crimp die. At the range, I fired ten rounds, then let the barrel cool for five minutes, which made for an all day deal. But it was worth the effort.

Our testing proved that Hodgdon’s 200 round claim is clearly conservative, as we suspected. If you’re a high-volume shooter and reloader—or if you just hate cleaning guns—get yourself a jug of CFE223. It works better than advertised! For more information, contact Hodgdon Powder Co., Dept. OT; Tel.: (913) 362-9455; Web: www.hodgdon.com