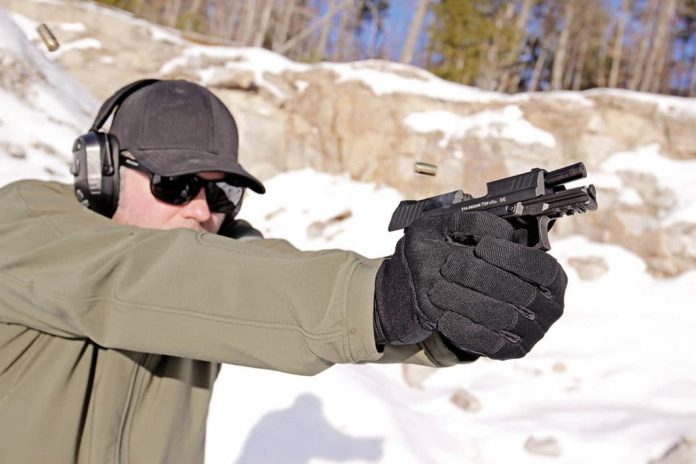 The On Target evaluation pistol was tested for accuracy from a Matrix rest on a concrete bench 25 yards from the target, with loads representing the three most popular bullet weights in 9mm Luger. Each 5-shot group was measured to the nearest 0.05” between the farthest-apart hits, center to center on the bullet holes. A second measurement of the best three shots was taken because it has been shown that for hand-held shooting from the bench, this measurement factors out enough unnoticed human error to approximate what all five would have done from a machine rest.

For 115-grain I used what seems to be America’s favorite practice round in the caliber, Winchester USA brand “white box” generic full metal jacket. The five-shot group measured 4.10”, but the best three were in a much more promising 0.95”, the best such measurement of the test.

For 124 grain, the load was the venerable Hornady XTP jacketed hollow point. The whole group constituted the best 5-shot cluster of the test, 2.90 inches. The best three? 1.15”.

For 147-grain subsonic, the load was the Remington-UMC economy-priced full metal jacket practice cartridge. The five shots produced a 3.20” group, with the best three in 1.15”. Given that the conventional wisdom holds a 4-inch group of five shots at 25 yards to constitute adequate “combat accuracy” from a full-size service pistol, the little concealment-size HK did well indeed.

The P30SK has a curve low in the backstrap of its gripframe, like the arched housing on a 1911A1 pistol compared to the flat housing on the earlier original 1911. Obviously, a pistol’s “feel” is a totally subjective factor, but in my hand this curve goes right into the hollow of my palm like the similar excellent shape on the “baby Glock” short double-stack pistols such as the G26 and the G27. This seems to lock the pistol more solidly in the hand, and allow you to shoot it more accurately, even though the grip-frame is so short that the pinkie finger has to curl under the butt. For icing on the cake, the P30SK comes with inserts to adjust grip configuration to the shooter’s own hand.

The bore axis of this HK seems a little higher than that of the baby Glock and some other subcompact 9mms, which promotes more muzzle lift. I did see more rise of the muzzle at the shot than with, say, one of my Glock 26 pistols. However, by the time my trigger finger had re-set the trigger, the HK’s luminous front sight was back on target. When testing my first specimen of the P30SK for Guns, I took it to Thunderbird Academy in Wichita, Kansas as my “teaching gun” for a MAG-40 class. The fast reloads afforded by the ambidextrous “paddle” magazine release on the bottom of the trigger guard, combined with the P30SK’s generally excellent shooting characteristics, allowed me to shoot a perfect 300 out of 300 when demonstrating the qualification course to the class.

This test gun, like the one before it, came with HK’s “LEM” trigger system. The Law Enforcement Module has a long but fairly light pull for the first shot. After that round goes downrange, the shooter can allow the trigger to come forward to re-set at a point well before it has come all the way forward to “at rest” position, where it will go if the finger comes off the trigger or allows the trigger to travel all the way forward past the re-set point. Thus, while the LEM is considered “double action only” or “self-decocking” by most, it gives the shooter the option of “riding the link” and following up the first shot with shorter trigger pulls. Finally, this HK has “double strike” capability, meaning that if the gun misfires you can pull the trigger again without running the slide, but this time the pull will be longer and heavier. Since neither of my test P30SKs ever misfired, I never had the opportunity to find out how that feels, which is a good thing . . . as is the optional double-strike capability, in my humble opinion.

My only real complaint with this gun is something I’ve seen with other, larger P30 models. The shape of the trigger and lower interior of the trigger guard combine to pinch my index finger. I’ve run across a few other folks with the same complaint, but it doesn’t bother most. A few dry-fire trigger pulls when the gun comes out of the dealer’s showcase will tell you whether this is a deal-breaker or not before you buy.

Our On Target test team for this pistol included lefty Josiah Gunter, who confirmed that the SK, like other P30s before it, is extremely southpaw-friendly. Whichever is your dominant hand, the P30SK’s ambi mag release paddles and slide lock levers give you options as to how your hands can most expeditiously lock the slide open or close it fast, and dump an empty magazine without having to shift the pistol in your hand. The configuration of the P30’s slide stop levers also give a good felt index for keeping trigger fingers in register on the polymer frame when the pistol is out in a ready position.

It’s female-friendly, too. The two females on our test team were petite Gail Pepin and athletic Courtney Gunter. Once they got the feel of the LEM trigger, which is distinctly different from their familiar Glocks, both were able to shoot the P30SK fast and straight, with quick recovery in rapid fire.

The young Gun Culture Gen 2.0 guys who run Green Force Tactical comprise an up and coming firm making fine Kydex carry gear. My favorite outside the belt concealed carry holster for the 20-shot Springfield XD(M) 9mm is a Green Force. They made me one of their standard inside the waistband holsters to fit the P30SK, and in a week of constant concealed carry when I wasn’t in bed—I not only carried it, but taught and shot with it—the Green Force IWB performed superbly. (greenforcetactical.com).