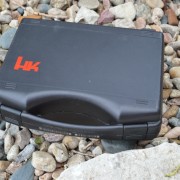 I have always wanted a $1100 H&K pistol about the same way I have always wanted a BMW 7 series. In reality, there are many cars far less expensive which can deliver the utility of the BMW, but with the Beemer, you get a style and exclusivity which many cannot afford. I still do not have the $85K for a low end 7 Series, but I decided to plop down the cash for the H&K P30L after seeing it at SHOT show 2014. Beyond the exclusivity of the H&K brand and style, one of the main features which grabbed my attention was the simple but effective rear decocker. Other features that sealed the deal include the H&K trigger guard magazine release,which I have become a huge fan of, as well as the outstanding ergonomics. In many ways this H&K P30L delivers a nearly identical ergonomic experience as the Walther PPQ M2 which I am totally enamored with, but it does it with H&K style and features.

Some designs put them on the map as a top tier firearms manufacturer and design house… others not so much. One such idea that never took off was a ceaseless ammunition rifle and ammo. Basically the powder was compressed in a manner which allowed it to durably function as it’s own case. H&K was the first to develop this caseless select fire rifle, which I am still not sure why it was not insanely popular with the military folks. Perhaps it was too cutting edge of an idea, and it begs the question if someone offered a Star Wars Blaster, would the military reject it just because it does not look like an M4. H&K was also the first to develop hexagonal rifling which many companies now use to improve accuracy and reliability across a diverse array of ammo.

Successful cutting edge designs obviously include Heckler & Koch delayed roller sub-machine guns and pistols, but for the general populace they also had some edgy designs which were still very successful. From a pistol perspective, I thought the polymer VP70 Volks introduced in 1970 with a stunning 18-round capacity was one of the most futuristic production pistols I had ever seen, and it still remains futuristic looking today over thirty years later. The pistol was initially hot because of the huge capacity and followed with an amazing 29-year production life.

The collectable HK P7 with its squeeze cocking device is still a gun a lust after even though they are going for more than this new HK P30L. Meanwhile, companies like Colt and Springfield are just recently getting into polymer pistols. So you get the idea that H&K are innovators and this HK P30L is one of H&K’s newest designs.

The P30 series has been an enormous success for H&K with the military and police as a solid reliable pistol platform which delivers H&K innovative features in a design which is not too unfamiliar/strange when compared to other pistols. Plainly put, the P30 series is not so cutting edge that no one wants to adopt it and features just enough H&K cool stuff to deliver more than the the rest of the polymer pistols on the market.

The fit and finish are excellent as you would expect. The molding is well defined and precise around all areas of the pistol. This pistol is offered in a number of versions and calibers. The P30L is basically a 1/2″ longer barreled version of H&K’s very popular P30 designed with the addition of the “L” on this model. Beyond the barrel length, the P30 and P30L are identical and can share all accessories, holsters and magazines. Essentially, the H&K P30L is the same size as a standard Glock G17 but with a 15-round capacity versus zone G17′s 17-round capacity. The H&K P30L is infinitely more comfortable for me than… well, any other pistol with the exception of the PPX and PPQ Walther pistols.

I know I have bantered on my soapbox that the comfort of a defensive pistol is secondary as long as it not uncomfortable, but this is a different type of purchase. I don’t need leather and hand burnished burl wood in my car either, but you tend to expect certain things in a high end car and a high end pistol.

For a retail price tag about twice that of most other similar full sized 9mm pistols, you expect refinement and that is exactly what the H&K P30L delivers. Unlike my Uber comfy Walther PPQ, the H&K P30L features three sets of Small, Medium, and Large back straps and grips to tune the already incredibly comfortable grip to your perfect wide and backstrap feel. I spent the better part of an hour playing Gun Barbies with the grips and settled on the medium side panel and back straps initially already installed on the H&K from the factory. Mrs. Pandemic found that the large grips for her very long fingers fit her best. From a car perspective, I suppose this would be the equivalent to playing around the seat height, angle, and lumbar support on supple leather seats of a BMW 7-Series… or so I imagine.

The P30L is beefier than the Glock and marginally heavier, with a more substantial breach and thicker bits here and there in key stress areas. The design team added a slip-on buffer to the recoil spring and guide rod which in theory increases service life and shooter enjoyment. The H&K P3-L was the softest shooting between a side-by-side testing of a Glock 19, Walther PPQ, and H&K, but the difference was not significant.

Beyond sheer durability, one notable feature is the H&K paddle magazine release. The rationale for this release is that is greatly reduces a jam/condition 1 loose magazine pistol failure caused by the mag release button being accidentally hit in the holster or during the draw stroke. Another reason is that the paddle mag release provides true ambidextrous magazine release features even if the pistol is transitioned to the weak hand during fire.

In some cases, I could see that this release could actually be faster than a standard release because you trigger finger can drop the magazine without a hand reposition while you reach for the mag, but that would require completely re-training oneself to use this feature efficiently. The reality is that with fifteen rounds on tap, it is statistically unlikely that you will ever need to reload your firearm in a gunfight, and in that situation you would be best served with the pistol magazine fully seated and somewhat protected from accidental release.

The pistol is fully ambidextrous with dual slide releases, magazine release levers, and a serrated decocking button located on the rear of the frame. H&K designed the extractor to also serve as a loaded chamber indicator, providing a reminder of a loaded chamber that can be subtly seen and felt.

My P30L features luminous (non-radioactive) tubes housed within big beefy looking steel front and rear sights which worked just fine during day and night testing. To assure you know what is in front of you making that bumping sound in the night, the pistol provides a pretty long picatinny rail for mounting lasers and tactical flashlights.

All these cool features aside, the biggest feature for me is the double action and single action capabilities of the pistol. Many pistols do this, but most add in some stupid superfluous safety or decock lever which gets in the way and just irritates me as a Glock shooter. That noted, you will at some point need to decock and drop the hammer and the preferable method is a decocking lever to safely drop the hammer. H&K delivers a design which moves this decocking lever from the side of the pistol where it is typically in the way of normal charging and malfunction clearing operations, to the back of the pistol next to the hammer. Once the bad guy is down or your Steel Action Target is all painted silver, you can just reach up with your thumb and touch the button on the back of the slide and the hammer drops safely. I love it.

Many manufacturers such as Sig, Beretta, and others still offer hammer fired pistols, but no one moves the damn decocker out of the way. I cannot count how many time my support thumb has pulled the decocker on Sig or S&W instead of the slide release when attempting a speed reload. I am not such and idiot that it happens every time I shoot these pistols, but it happens more than I feel comfortable with, which is on one reason I prefer Sig’s 226SAS model. The Beretta 92F additionally has the problem that you can actually put the gun in safe during a draw, charge, and fire drill especially if you are used to a striker fired pistol. H&K gets the decocker out of the way to the back of the pistol. A small detail, but another level of refinement you see on the H&K P30L.

This is a defensive pistol so it does have some trigger take up, and the trigger reset also is long compared to some striker fired pistols. Compared to the Walther PPQ or a Glock, the H&K P30L trigger pull is a little longer for both the single and double stage, however that is a feel you get with a double action/single action trigger pull. The trigger pull on the P30L is similar to Sigs, Smiths and other similar double action hammer fired pistols. For me if there was a weak point on the pistol, the trigger would be it. I would really like the pistol to have a bit crisper break, but that might be a odd criticize for a pistol designed to assure that when you pull the trigger you mean it in a defensive situation. For a defensive trigger it works, but I would like it to have been more refined.

Just like a Glock, I am confident I could use soft turds and dirt clods as bullets and this P30L would feed perfectly, and it did even with real bullets and my reloads (which in some cases are spec-wise close to turds). Accuracy was excellent — a bit better than any of my factory Glocks, Sigs, and Walthers easily delivering 1″ groups at 25-yards off sand bag rests with most .