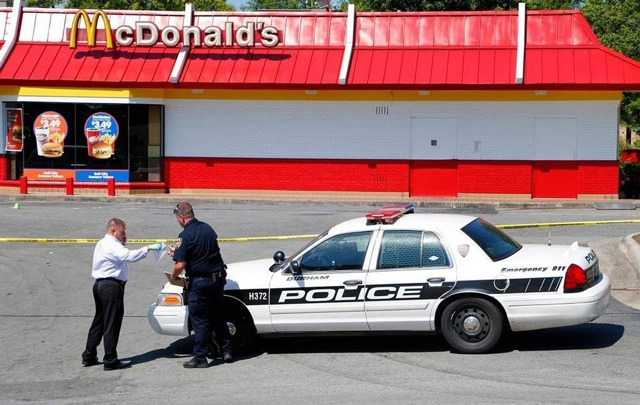 When police in Durham, North Carolina, responded to a call about a robbery in progress Wednesday afternoon at a McDonald’s, they arrived on the scene to find the suspect holding a woman hostage in the darkened restaurant with his arm around her neck.

“Every indication was that he was going to harm and was capable of killing the victim,” said Police Chief Jose L. Lopez.

But Sgt. Glen Price wasn’t about to let that happen, and after the brief standoff fired a single shot, which struck the suspect in the face. The victim was not harmed.

The suspect, who was identified as 26-year-old Dennis Lawrence Palm Jr., was transported to the hospital to receive treatment for the gunshot wound, which is believed to be non-life threatening. Palm is charged with two counts of second-degree kidnapping, one count of attempted common-law robbery, two counts of assault on a female and two counts of communicating threats.

Price has been placed on administrative leave, as is standard protocol.

“This is a real serious example of what officers have to go through on a daily basis,” said Lopez. “Split-second decisions that involve the lives others.”