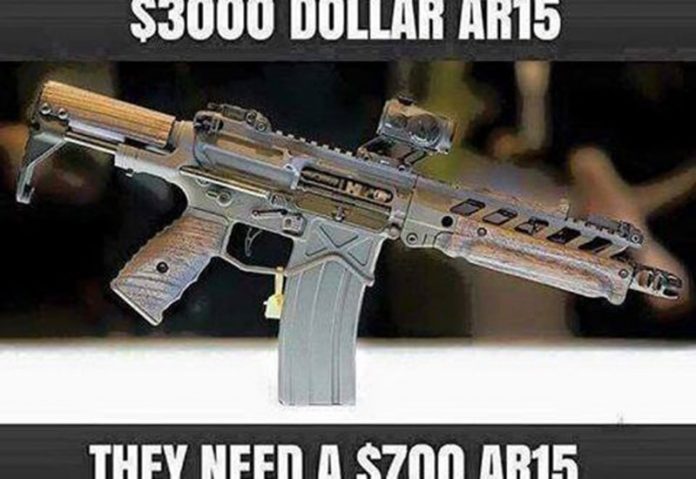 Hey, I just bought an AR15. What should I get for it next?

Ammo… Buy Ammo… And USE IT.

I saw the meme above a couple of days ago circulating social media from the SHOT SHOW 16’ remnants. Let’s make this picture worth the thousand word discussion and tackle the vast underinvestment in training.

What we’re discussing is where your value per dollar can be best put to use. This is even more true for newer shooters but has validity at all experience levels. You cannot over invest in proper training. You can underutilize a firearm.

So right up front, I’m not telling you to skip out purchasing that SCAR17s, the premium Daniel Defense, Bravo Company, or LWRCi AR15, or any other top tier firearm. Having purchased a few of those rifles myself, I can confidently say they perform to their price level.

I can also attest that shooting and training with a more basic and less expensive rifle is worth far more to you and me than purchasing a premium firearm but having it remain an idle safe queen.

There is nothing wrong with safe queen firearms but the question is WHY did you pick up that rifle, to collect it just because or to put to a more serious and active purpose?

On the AR15, I got to ‘cheat’ a little. As a basic trained US Marine in 2007, I was handed an old M16A2 (About an $800 configured AR today brand new) and for about 3 months spent time and effort daily on the rifle. A full month of that time and about one thousand rounds were dedicated to nothing but the basic manual of arms practice with the AR15. The ‘cheat’ was money didn’t come out of my pocket to train.

Enlisting is one way to get some training for less. That comes with serious obligations and isn’t for everyone, not to mention the fact that it’s a job encompassing far more duties than just tactical training.

So that leaves investing our personal capital and time on training, which in my opinion and experience is a far higher quality training endeavor. This comes from my time in the USMC. The best training I had and the best training I later passed on was that which I took individual initiative to complete or that which we completed as small units. Anyone with a veteran background can attest to the mountain of other administrative tasks that must be completed day to day because it’s still a job, and that makes tactical training focus more difficult. Those facts make individual training exponentially more valuable.

So let’s take a look at these paths for training that are high value for the individual.

Back to the title… buy ammo.

Buy a case of ammo… not box, case.

Shoot through the case of ammo and buy another case.

Even with no other direction this real world use of the rifle, following the basic safety rules, will passively familiarize you with its operating characteristics. You will start to get used to it. Think of this as taking a car into an empty parking lot and just rolling around, the only thing you had known about the car before this was how to turn on the ignition, putting it into drive, the break, and the accelerator. Not structurally informative but you will passively pick up how the car works, your prior knowledge being limited to basic safety and not detailed operation.

This is the least useful form of individual level training. But it isn’t without value. If you or I picked up a $600-$700 dollar rifle and spent that same amount on ammunition and targets for repeated range sessions, you will understand that rifle better than picking up a $1200-$1400 dollar rifle that never fires a shot.

I did this several years ago with my first personal rifle. Younger and with far less money but starting to mold a career as a shooting safety officer and instructor I picked up a new tool. I spent $626 on an AKM rifle after doing some online research and had a budget of approximately twice amount that to round it out. So along with the rifle, a few magazines, and a rifle bag, came a couple cases of ammo. 7.62×39 was and is still very affordable, and that helped me out.

Did I just take the rifle to the range and figure it out from there? No, and you don’t need to either. We don’t live in a vacuum and the resources to help you learn the rifle start at the owner/operator’s manual and continue here online.

There is a wealth of instruction online that you can delve into. Operation, maintenance, manual of arms, traditional techniques, modernized techniques, accurate shooting basics, iron sights, adding optics, making adjustments, troubleshooting equipment, malfunction clearance, and more. All of it out here to be read and seen and assist you in learning to shoot safely and effectively. Take anything you read or see with a healthy dose of skepticism until it proves itself to you because not everything out there will work and flow around your natural body mechanics.

The point is you can reference and try out tactics, techniques, and procedures on your own initiative and start developing what works for you.

And with that, we’re back to buying ammo. Reading good theory and even practicing dry with an unloaded rifle can be value added training but nothing replaces live fire. But now by using references we have a direction for that training instead of just shooting for amusement. There is nothing wrong with having fun but we’re striving for increased competency and understanding of the rifle as the serious defensive fighting tool you intend it to be.

Now let’s look at further reinvesting to take it a step further. Take a weekend and spend the money to take a professional course. A few hundred rounds with other shooters of various skill levels under the guidance of a professional trainer or training group is the best way to keep pushing your skill sets and identify weak points to work on, hone, and refine.

We coddle ourselves as individuals at every skill level, and we must be willing to go and say “Self, you suck. It’s time to suck less.” Taking time to work on pushing our failure points to higher standards instead of repeating things we do well and patting ourselves on the back. A training course is the best way to do this by using a dispassionate set of professional eyes. The instructors are there to make you a better shooter not to make you feel good.