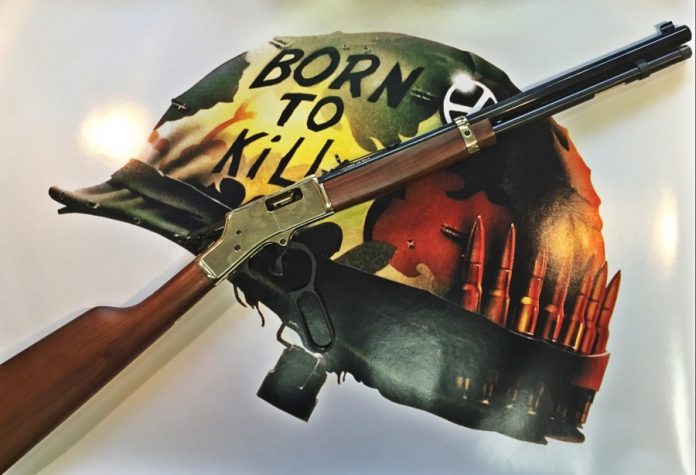 One of my favorite movies of all time is the 1985 Lawrence Kasdan western drama Silverado. If the name Lawrence Kasdan rings a bell, it’s because if you’re like me, he also wrote a couple of movies that may have been important to your childhood. Perhaps you’ve heard of a small film called Raiders of the Lost Ark or a different movie called The Empire Strikes Back? That’s right, he wrote the best installments in both the Indiana Jones franchise and the Star Wars franchise. But what does that have to do with this rifle? In Silverado, Danny Glover’s character (Malachi Johnson) carries a Henry rifle, and delivers a fantastic line: “Mister, you ever see what a Henry rifle can do in the hands of someone who knows how to use it?”

The gleaming, brass framed Henry rifles in Silverado always struck a chord with me. I’m not saying that a movie is what motivated me to write the Henry Big Boy 45 Colt Review, but I’m not saying it didn’t either. They were beautiful but functional – the heavy brass frame could contain the pressures of the .44 Henry rimfire round, and the heavy octagonal barrel provided all the stability and accuracy a frontier rifleman could hope for. But it’s 2021 now, and we have no need of such rifles, right?

The Future is the Past

Wrong. Some time ago, a little up-start company in New Jersey took on the name Henry Repeating rifles, and began producing brass framed lever action rimfire repeaters. There were some changes from the original Henry design in order to simplify production and cost. The rimfires were a hit. As it turns out, there is a market for an affordable, American made lever action. It only made sense then for Henry to branch out and start creating guns chambered in the classic centerfire cartridges. That resulted in the Henry Big Boy, which uses a hardened brass receiver and is chambered in .45 Colt, .44 Magnum, or .357 Magnum. Both of the magnum chamberings can accept their respective Special-length cartridges as well.

The Henry Big Boy 45 Colt has been around for almost two decades now, and it’s a popular, successful rifle for Henry. Which makes sense, because it’s a ton of fun to shoot. I purchased this rifle pretty much because “lever guns are cool,” and I have zero regrets about that purchase.

The technical specifications are pretty straight forward on the Henry Big Boy 45 Colt. This is a lever action, .45 Colt rifle with Henry’s hardened brass receiver. It holds 10 rounds, has a barrel length of 20 inches, weighs 8.75 pounds, and the trigger breaks right around 4 pounds. The sights are the traditional buckhorn type, which aren’t the fastest in the world, but actually allow for a ton of precision when you need to make an accurate shot. Finally, the magazine is a simple tube under the barrel that’s loaded by removing the spring loaded rod, and then dropping the cartridges directly down the tube. The spring in the rod forces the cartridges towards the action, where they’re eventually picked up by the lifter during the loading process.

It shoots exactly like you’d expect, which is “great.” A 9 pound rifle with a 20 inch barrel firing .45 Colt feels like shooting a gallery rifle, even when I’m shooting stout Winchester PDX 225 grain JHP out of it. Follow up shots are a joke, because at 25 yards even with the buckhorn sights the rifle will park bullets in the head of a B27 target all day long.

This “group” is a great example of the practical accuracy capability in the Henry Big Boy 45 Colt. Ran the target out to 25 yards, started from the low ready, and just worked the lever as quick as I could putting Hornady 250 grain cowboy action bullets into the head box. It was great. One of the things I noticed about the gun is that you have to operate the lever with authority, which after a few hundred rounds wears a bit on the backs of your knuckles. If you look at the rifles that top Cowboy Action Shooters use, the levers are almost always wrapped with leather or another material, this makes continuous rapid operation a lot easier on the shooter’s hand.

I tested the Henry Big Boy 45 Colt with three brands of ammunition. The first was Winchester 225 grain PDX, which is Winchester’s self-defense load in .45 Colt. These fed well, were extremely accurate, and again were just a joy to shoot out of the Henry. My plan is to use this load for South Dakota’s deer season come November. The next round I tested was Hornady’s 255 grain Cowboy Action load, which, just like the Winchester ran through the gun like crap through a goose. The last cartridge I tested was Fiocchi’s cowboy load, and there I ran into problems. For whatever reason with the Fiocchi, and only the Fiocchi, I experienced multiple bolt-over-base malfunctions. An examination of a box of unfired Fiocchi rounds revealed that the case rims were not all the same diameter, an issue that wasn’t present with Hornady or Winchester rounds. I guess my American made rifle prefers American made ammunition.

This rifle is a great example of a gun that is a nice thing to look at, a wonderful thing to have, and yet something that is still 100% functional. If you’re buying it just to have something to punch big, .45 Colt holes in paper it’s a great choice. If you want a relatively fast handling rifle for deer, I’m sure it’ll do excellent at that. If you want it to simply scratch that nostalgia itch from growing up watching westerns and you want something made in America? Here’s your choice. It really is the rifle that the western cowboy would have carried in his saddle. It’s affordable, reliable (with correctly made ammo), and would be perfectly at home in a truck’s gun rack, a leather saddle scabbard, or carefully preserved for in your safe. It’s the kind of gun, worn from years of use but still functional, that you give to your firstborn child when they come of age.