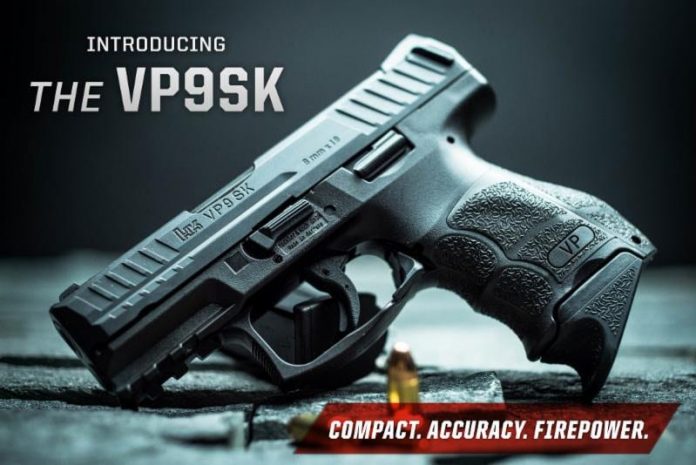 Heckler & Koch’s eagerly anticipated striker fired subcompact debuts at the 2017 NRA Exhibition in Atlanta, Georgia. The VP9SK (9 mm) has all of the sought-after characteristics of the larger frame VP models but in a more compact design.
With a retail price of $719, the VP9SK continues HK’s trend of affordability in a superior quality handgun. The VP9SK is made in Germany and carries HK’s Lifetime Warranty.
A small-scale version of the completely adjustable VP grip feature -consisting of interchangeable backstraps and lateral grip panels -is present in the compact grip frame of the VP9SK. This allows the pistol to be easily modified to fit any individual user and is a feature found only on Heckler & Koch handguns. Molded finger grooves in the front of the pistol’s grip also instinctively position an operator’s hand for optimal shooting.
The highly-rated HK VP precision strike trigger is also part of the VP9SK. The VP trigger surpasses those found on competitors. It has a short, light take-up with a solid, single action break followed by a short positive reset. The result is trigger quality unmatched in most production striker fired pistols.

“The VP9SK is the right combination of compact size and firepower for a subcompact -and it’s loaded with unique HK features like our adjustable ergonomic grip -the only grip in the industry that can be customized to fit any shooter,” said Michael Holley, HK-USA Vice President for Commercial Sales and Marketing. “The VP9SK possesses the accuracy and durability that shooters know they can expect from a Heckler & Koch pistol.”
The VP9SK has all the features of the latest, state-of-the-art handgun. Every control is completely ambidextrous. Slide releases are present on both sides of the frame and the paddle style magazine release can be easily activated by left- or right-handed shooters.
HK’s patented charging supports, introduced on full size VP pistols, are also present on the VP9SK. The charging supports are simple, polymer inserts that are mounted on each side of the rear of the slide and provide better gripping leverage for racking the slide rearward. The charging supports speed reloading and make operating VP series handguns easier for shooters with reduced hand strength.
VP9SK pistols have an abbreviated Picatinny MIL-STD-1913 rail molded into their polymer frame for mounting lights and accessories. A proprietary captive flat recoil spring helps VP9SK pistols reduce the recoil forces affecting the operator and the handgun, improving shooter control during rapid firing and prolonging component life span.
VP9SK pistols can use a variety of proven HK magazines, including compact double stack 10-rounders with flat or hooked, ergonomic floorplates. New 13-round and 15-round magazines with magazine sleeves that replicate the grip profile of the full size VP will also be available later in the year.
VP9SK pistols are available and shipping now from HK’s Columbus, Georgia facility.
VISIT THE HK BOOTH AT THE NRA ANNUAL MEETINGS & EXHIBITS FOR MORE PRODUCTS
FROM HECKLER & KOCH BOOTH #4132.
Want to know more?  Go to www.hk-usa.com
About Heckler & Koch
Heckler & Koch is the world’s premier small arms systems company and a major supplier to global military, law enforcement agencies, and civilian shooters. An innovative leader in design and manufacturing, Heckler & Koch provides technologically advanced firearms, logistical support, training, and specialized services with the highest standards of innovation and reliability to its customer base. Heckler & Koch’s well-known range of products include the MP5 submachine gun, the MP7 Personal Defense Weapon, the G36 weapon system, the HK416 enhanced carbine, and VP, HK45, USP, and P30 series pistols.