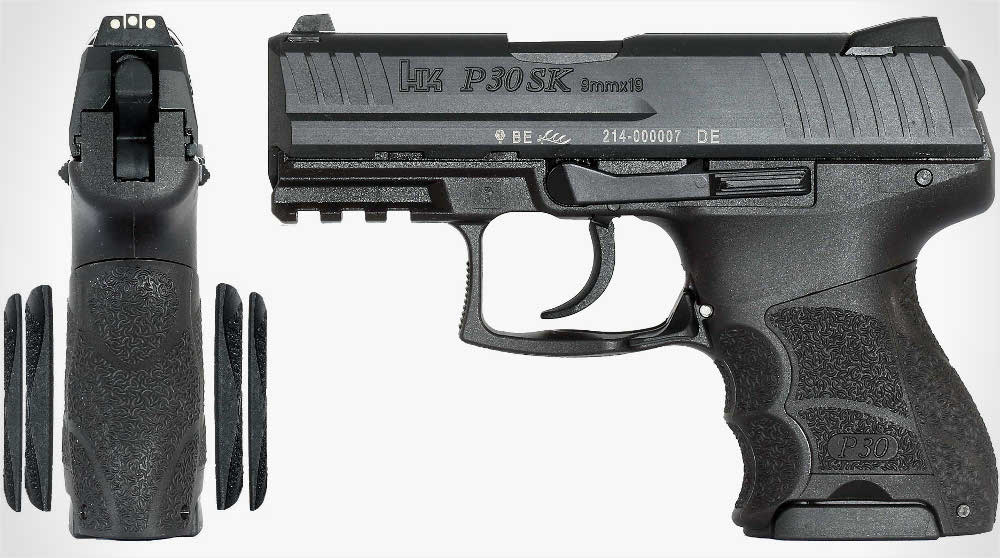 Heckler & Koch is about to make a lot of people happy. They’re introducing a P30SK at the upcoming NRA Annual Meeting this weekend. The P30SK is the “SubKompact” version of their popular and established P30 service pistol. The P30SK will be offered with all the P30 trigger configurations to boot.

“Shooters love HK P30 series pistols,” said HK-USA vice president Michael Holley. “They are packed with features like incredible durability, superb accuracy, and the only grip in the industry that can be customized to fit any shooter. With the P30SK you get those same features in a small, extremely handy package and at an amazing price.”

One of the stand-out features of the P30 series, and its new striker-fired counterpart, the VP9, is the modular grip system. While many modern service pistols have some way to adjust the grips to better suit individual shooters, these HK pistols take things to the next level with a set of nine interchangeable panels for the sides and backstrap of the grip. Contoured to match the light fingergrooves and finished with a non-slip but non-aggressive grip texture, the P30SK promises to be one of the most ergonomic subcompacts on the market.

Designed for concealed-carry and backup use, the P30SK will be a hit with the commercial and law enforcement markets. The service-size P30 and full-size P30L are both popular guns for self-defense and range use, thanks to their comfortable grip and rich feature set. It’s got all the features of the other models just in a package that’s lighter and easier to carry concealed.

The P30SK is designed for left- and right-handed users with fully-ambidextrous controls including slide release levers and the European-style paddle magazine release. The P30SK will be offered with a traditional double-action, single-action trigger with either safety levers or a decocker as well as with HK’s other pre-set hammer trigger systems including their Law Enforcement Modification or LEM trigger and their Light Strike trigger.

It has a couple of passive safeties as well including an automatic hammer safety and firing pin safety to make it drop-safe in every way. And the dusk cover is railed for accessories including weapon lights and laser sights.

The pistol will be launched first in 9mm Luger with two flush magazines with a standard capacity of 10+1 rounds. They are protected by HK’s limited lifetime warranty and scheduled to hit streets sometime in June 2015. For more details and specifications check out the P30SK product page.

HK-USA has set MSRPs for the various models starting at $719 and upgraded law enforcement packages — which are available on the commercial market — at $819 including a third magazine and factory night sights. These are suggested prices meaning real-worl pricing will be competitive with other premium subcompacts.

We’ll bring you more info straight from source at this year’s NRAAM, which runs April 10-12 at the Music City Center in Nashville, Tenn.