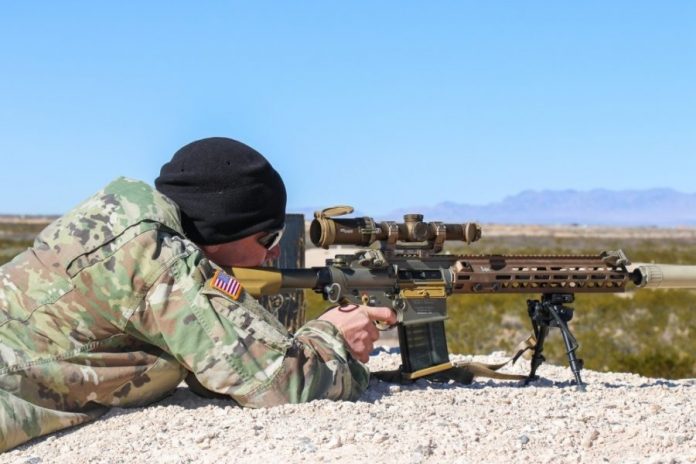 The SDMR is a variant of the company’s G28 (HK241) chambered in 7.62x51mm NATO. The platform, which itself is a development of the HK417 series. was evaluated at Fort Bliss by the Army’s PEO Soldier program earlier this year. Manufactured in HK’s Oberndorf, Germany plant, the rifle will soon begin arriving at the company’s Columbia, Georgia facility to marry up with optics, mounts, and accessories provided from a field of a dozen U.S. companies.

“This is a significant achievement for Heckler & Koch,” said Michael Holley, HK-USA’s COO/CSO. “The HK SDMR system will add much-needed capabilities to virtually every squad in the Army. We are honored by this opportunity.”

The Army is moving to adopt between 5,000 and 6,000 SDMRs to replace modified M14 rifles used as designated marksman rifles over the past decade. Doctrine stipulates a compact scope for the squad-level platform, and in 2018 the Army selected Sig Sauer’s 1-6x24mm Tango6 optic as the designated glass for the SDMR system. The German Army already uses the HK G28 with a variety of Schmidt & Bender glass. The rifle has a 75 percent commonality of parts with the standard HK417 (Photo: U.S. Army)

The same G28 rifle, when classified as by the U.S. Army as the M110A1 Compact Semi-Automatic Sniper System, or CSASS, uses a Schmidt & Bender 3-20 power variable scope.