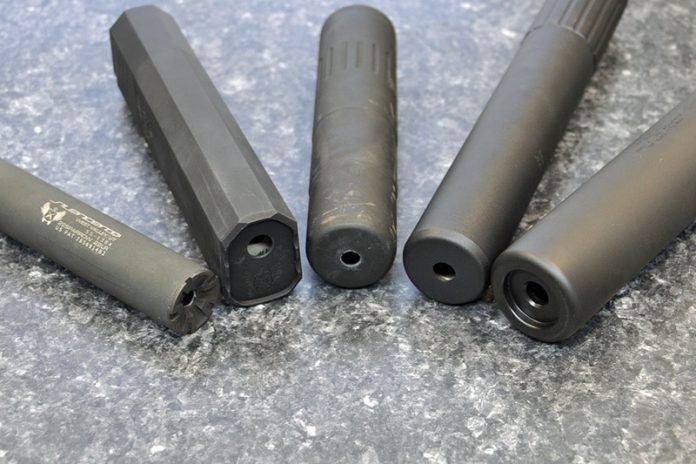 As 2017 started and the newly elected President of the United States Donald Trump began to make the public relations rounds to newspapers and television conglomerates one suggested piece of legislation above all others made gun owners smile with shear joy. The proposed legislation was the House Resolution Number 367 of the 115th Congress of the United States, better known as HR367, The Hearing Protection Act of 2017. To the uninformed this proposed bill sounds more like a piece of legislation that would fall under the guidelines of the Federal Governments safety arm, the Occupational Safety & Health Administration rather than one that would have anything at all to do with firearms and the National Firearms Act.

Silencers or Suppressors ? What do they do exactly ?

There is a huge pile of misinformation and paranoia about silencers or suppressors as they are known in some circles ( for the record ATF uses the terms inter-changeably when you actually buy one or call them about questions so save the speeches terminology). Much of the paranoia about silencers comes from movies and unfortunately a good deal from some members of the law enforcement community. The silencer as we know it was first designed in 1902 by Hiram Maxim and was actually favored by sportsman of all walks of life, not because it made the gun silent rather it lowered potential damage to shooters ears by almost 40 decibels.

The silencer is essentially in simple terms a muffler for your firearms. It doesn’t make a firearm completely silent anymore than a standard muffler makes the average internal combustion engine 100% silent. This is a fact that many pro 2nd amendment advocates such as the National Rifle Association and the American Suppressor Association have been trying to make known and accepted by many ill informed legislators for years. Until the recent election these facts fell on deaf ears, that was until Donald Trump Junior, the pro 2nd amendment hunter and gun advocate took up the cause.

The gun industry and in particular the suppressor manufacturing sector of that industry led by the American Suppressor Association were over joyed by the Presidents Son getting behind making suppressors easier to purchase legally. The great part of the initial thought process and formation of what was to be known as the Hearing Protection Act of 2017 was that the goal was to make suppressors more widely available while still being tracked as if they were firearms in of themselves. That means instead of the 12 month wait to transfer a silencer and a pile of paperwork you would in theory be able to purchase one, fill out a BATFE Form 4473 and if approved walk away with your suppressor the same day, sounds like a good deal right ?

In Washington D.C. nothing is as easy at it seems, and when making political promises we have seen repeatedly that ALL politicians stretch the truth and promise the world but don’t make totally good on their promises. It’s just the nature of the beast, and we are seeing in the first 100 days of the Donald Trump presidency that being the President of the United States doesn’t always get you what you want. Even in spite of the most bombastic and far flung messages you can pack into 140 characters on a twitter account.

Anyone who has taken a political theory class will tell you that every time you rescind a piece of legislation there is a direct cause and effort event. When you are a politician, which President Trump is by default by the very nature of his position even in spite of his claiming not to be, everything has a cost. In the world of politics some actions build you, for lack of better terms “political credit” in the invisible political bank of Capital Hill. This is a potentially difficult dance to perform when you are a Washington insider, let alone a maverick self proclaimed non politician who has waged open verbal warfare on Congress.

The first 100 or so days of 2017 for President Trump has been a little rough. The White House’s attempt at repealing the Affordable Care Act fell flat, the gutting of the many federal agencies like the Food & Drug Administration and the Environmental Protection Agency have stalled for the time being and the Presidents choice of Supreme Court Justice has been tied up in confirmation hearings. When you add that to the facts that he has appointed some cabinet members that have already resigned and mounting international relations problems with Europe and China, you can see the Potomac Two Step is getting dicey. All of these issues being fanned and in some cases exaggerated by liberal media has eroded some members of Congress’s willingness to back many of the Presidents plans.

We live in a Democratic Republic, which is different than a Democracy, and it certainly is not a Dictatorship. A President has great latitude while using Executive Orders, but in the United States as formed by our Founding Fathers, it is difficult for a President to “Go it Alone” and act 100% independently of Congress. It’s the great part about the checks and balances that were framed in our constitution.

Now that you have read about political theory lets get down to the facts. President Trump’s approval rating is hovering around 35-37% by most poles, and this is not a good thing this early in his presidency. When you wade into the battle over gun rights and try to overcome years of anti gun democrats demonizing firearms it can be daunting on a good day. Political battles like that can eat up that “Political Credit” I spoke of. When you try to detach the stigma of guns or things like silencers that have had 70+ years of lies told about them it is a massive risk. A risk that many lawmakers who are not like President Trump and are in fact self serving career politicians won’t risk their own jobs come election season to support.

When you cut through the drama and the hype of the issue what it all boils down to is that the Hearing Protection Act of 2017 is a piece legislation and not an Executive Order by the President of the United States. It may very well be a piece of legislation that the President supports but he is unlikely to risk any more political skin to go after the topic of suppressor availability with an Executive Order.

The topic of softening the regulations on suppressors is a polarizing one even in our own gun community. All you have to do is ask a gun owner about it or check the local news feed, hardly a day goes by the last few weeks without reading about the Hearing Protection Act of 2017. At the end of the day the facts are the President’s not in a real position to do much about suppressor availability and the Republicans who sided with him are beginning to hear grumblings from their home districts about other issues that face a larger segment of the American public.

While 120+ Legislators in the House of Representatives have Co Sponsored the Hearing Protection Act of 2017 , the Senate companion bill, known as Senate Bill 59 of the 115th Congress only has 11 Co Sponsors. It is of some note that the bill hasn’t  moved since it was referred to the Senate Finance Committee on January 9th of this year. That’s not a good sign when it comes to the political process.

I would love to see some softening of the NFA as a whole and make suppressors transferred on a BATFE Form 4473, I would love to add more to my gun safe. I support suppressors and think they should be encouraged as a public health device for sportsman to combat hearing loss. That being said I am afraid that nothing will change in the realm of the National Firearms Act anytime soon, there are just too many foreign and domestic issues for the White House and Congress to deal with to risk hours of dramatic CSPAN debates and sound bites. As a businessman I don’t see the President directing his staff to cater to a small segment of the population in suppressor owners who offer nothing in return politically. This is one time in my life I would love to be wrong and have 40,000 people come to the web site and tell me I was wrong. I would gladly welcome the ridicule of being wrong about such a great thing as suppressor availability.