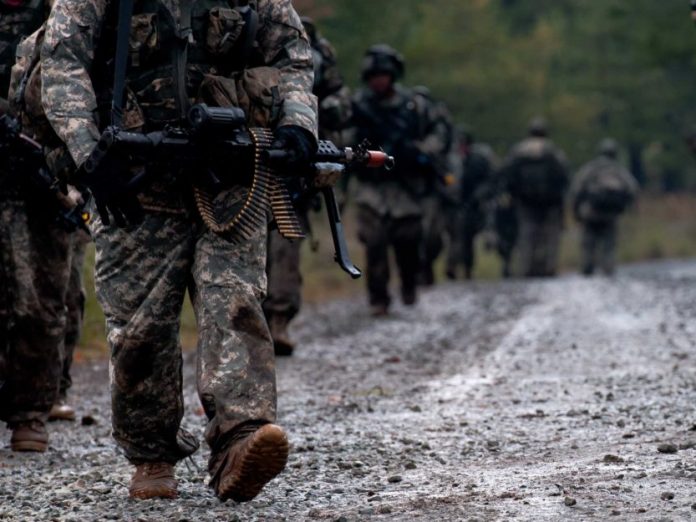 About 8-9 months ago we posted a piece on boots and not only having ones that fit properly but having at least one backup, broken-in pair when you start Selection. With new classes starting up, we’ve gotten some questions about the different gates and events at Selection and we’ve posted on those and will revisit many of them again.

Most of the questions we get regarding the Selection process center around rucking and land navigation and today’s topic, boots, and boot fit are an integral part of passing anything to do with either. Because you’re going to be doing a ton of walking during the rucksack marches and Land Nav and if your boots are giving you problems, you’ll be in a world of hurt.

So, it is a good time to revisit the care of your feet and the proper boot fit that we touched earlier this year. For you younger guys getting ready to attempt Selection, this may seem like a trivial matter, but it is not.

As I’ve said many times… Your feet along with your brain are the two most indispensable parts of your body in Special Operations Forces. I’ve repeated ad nauseam many times what the men who trained me have said over and over. Your feet are your lifeline in Special Operations. Take care of them and they’ll take care of you. Having spent many years in the Special Forces Regiment, care for your feet became second nature and will be a very necessary function.

If anyone in your class or is a training partner has been in a light infantry or an airborne unit. they will know these tips already. If you don’t have that background but have senior NCOs or officers that served in these type of units, seek out their advice on the subject before beginning your prep for Selection.

Proper Fitting Boots: Unless some things have changed at Camp Mackall, and I doubt they have, you won’t be allowed to wear any of the high-speed boots in Selection, only what the military issued you. So, wearing the various boots from Merrell, Asolo, Lowa, Vasque, etc. will have to wait until you graduate and go operational.

The key for proper fitting boots is ensuring that the boot’s heel sits tightly to the rear of the foot while giving the toes some wiggle room up front. If your foot is sliding around too much, either front to back or side to side, you’ll have friction, which leads to blisters. If your boots are too tight, your toes will be curled up inside and that is a blister waiting to happen. Some people advise buying boots a half-size too large because your feet will swell on a long-range ruck march. I wouldn’t recommend that but if your feet swell that much it may be an option.

Have at least two pairs of boots ready for your Selection class and break both in like you would a baseball glove. Walk everywhere in them until they feel like an extension of your leg. It is a good idea to get boots that have good ventilation and water drainage as they’ll allow your feet to breathe and dry out when wet which will cut down on blisters

I know I’ve beaten this horse to death in our PT Preparation articles but having a second pair of broken in boots is essential. Without that, you are setting yourself up for failure. You are going to get wet a lot during Selection, even on days when it isn’t raining or snowing. During the events of that day, you just drive on and do what you must.

But that night, allow the boots to dry out and stuff them with paper towels or newspaper and allow them to dry out properly. Wear the second pair the next day and the first pair will be ready after that. And if your boots blow out on you during an event, you will have a second pair of well broken in ones to take their place. Having to use a new pair of non-broken boots in Selection is not the way to get thru the course with your feet intact.

I can recall one February class when I was a cadre member at SFAS. It was cold and damp and it rained/sleeted and even snowed hard on the candidates nearly every day. The dirt back roads and trails in North Carolina were soupy and underwater in many places. The candidates’ feet were wet nearly all the time, and because training doesn’t stop, their feet suffered.

Nearly all had multiple blister problems and our cadre’s medics were working overtime. Many of candidates had feet that resembled raw hamburger by the end of team week. They were forced into switching out their boots daily and those who didn’t have a second broken in pair suffered the worst of all.

Prepping and Caring for Your Feet: Having been a cadre at SFAS as I mentioned above, I’ve seen all different kinds of foot preparation and care. Another cadre member Doug P. and I when we had the night duty used to walk around the candidate’s barracks incognito at night to see how they were caring for themselves and their teammates. (Foot stomp… take note. You’re always being evaluated)

You should have a good set of nail clippers with you when attending Selection and ensure that you take good care of those as needed.

Here is where you must know your own body and what works for you. Everyone is different and what works for me, may not work for you and vice versa. That’s where the proper preparation and training BEFORE you get to Selection is invaluable.

Some guys spray their feet or use a roll-on antiperspirant which is supposed to stop the sweating which is the cause of blisters. While I was never a big believer in this, if your feet sweat profusely as mine do, then by all means, try it during your prep phase to see if it works for you.

Other guys, I’ve seen use Vaseline or some type of oil or cream to reduce friction. Again, it isn’t something I’d recommend but it does work for some people.

What worked for me (and again everyone is different) was to use just a small amount of Gold Bond powder on your feet and in your socks before going on a ruck march. Not too much, it is like anything else, if you put half a tin in your socks, it will clump up and create just as many problems. It cuts down on friction which creates blisters. I’d recommend putting some around your crotch as well. If you get rubbed raw “down south” it isn’t pleasant walking for miles that way.

Proper Socks and Fit: Socks are your feet’s last line of defense. Just as proper socks will protect them from blisters, poorly fitted ones will cause even more problems.

So first, what causes blisters? Heat, friction, and moisture. We’ve already covered getting a couple of pairs of boots that fit well, don’t rub, and are ventilated so your feet can dry out quickly and allow some air flow inside.

Initially, get a good pair of tightly fit synthetic or polypro socks that will wick the moisture away from your feet. Rub your feet down with a light coat of powder or whatever you choose and then turn them inside out. Why? So that the stitching inside won’t rub your toes and create hot spots. That stitching can and will cause blisters.

The thick military issued wool socks go over the inner layer of socks and once again inside out to prevent the stitching from rubbing and creating hot spots. The second sock reduces the friction and will absorb the moisture from the inner sock while cushioning your foot inside the boot.

Why do we do this? Good question; the two-sock system is used so that the friction will occur between the layers of socks rather than between the socks and your feet.

Crawl, Walk, Run Approach to Preparatory Training: Like anything else, these are the things that you’ll need to work on in your prep for Selection and all of these issues should be second nature long before you show up to begin your course.

Once you get the proper boots and socks, then begin your rucking prep work. Don’t start off by trying to do a 20-miler or the equivalent of the Brecon Beacons on Day 1. Start slowly and gradually increase your speed and distance. As you get more comfortable rucking, the speed and distance will become second nature.

If you notice hot spots or blisters forming during prep work, stop right away and deal with those. Waiting until completion may result in a much more serious blister which will set your training prep work back.  Once the hotspots and blisters are no longer an issue your rucksack training can begin in earnest.

One more thing about your boots and that has to do with the way they are laced. Again, this is a personal preference type of thing but something to just keep in mind. I used to ruck most of the time in my favorite jungle boots. The way the boots were constructed as was the way my foot is constructed, there was a bend in my foot that always rubbed during a long-distance ruck march right at the crease of the boot at the ankle.

I’d always skip the eyelet right smack in the middle of my boots right there as it was always a sore spot that would rub. And after many 20-milers under my belt, it didn’t take long to figure out what needed to be changed. You will find certain things that will or won’t work for you. That’s where the prep work is invaluable.

As always, I appreciate the many questions that you have and will always be here to help in any way I can. Any questions or comments can be emailed to me [email protected] or at my Twitter account @SteveB7SFG