Footwork wins fights is a phrase I’ve heard way too many talented boxers say to ignore. I’m not a boxer by any means, but I do recognize the value of good footwork. In any fight, your footwork is pretty important, including in a gunfight. Having to move and shoot or just move while being shot is an important skill to have. The last thing you need to do is trip in a gunfight. Today we are going to explore what boxing can teach us about footwork in a gunfight and talk about a few drills you can practice to improve your footwork.

The Basics of Footwork

The basics of boxing footwork easily apply to gunfighting footwork. Obviously, they are two very different things, but the basics are largely the same. Like a boxer, you generally want to be facing the direction. You are moving with your head and feet oriented in the same direction. Lateral movements are important but should be used only for short movements.

When possible, you want to avoid crossing your legs. Crossed legs can make you off-balanced and make it easier for someone to knock you over, and increases your chances of tripping. It’s not necessarily bad footwork to cross your legs and sometimes can’t be avoided. 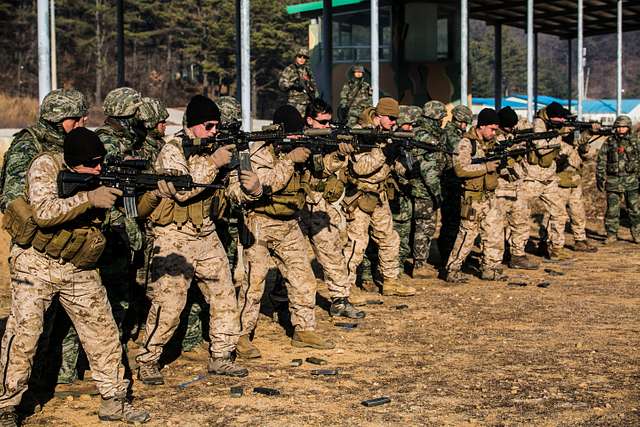 Move onto the balls of your feet. This helps you do a few things. First, it allows you to detect and potentially avoid tripping hazards. Second, it makes it easier to keep your knees bent, your weight balanced, and your body weight forward. If you bend your knees, you can absorb and cushion your impact, resulting in less upper body movement, which makes accurate fire easier.

To help you maintain control of your gun, lean forward slightly as you walk forward. This allows your body weight to help resist recoil. With your body bent forward, tighten your core to lock into the position. Avoid taking large steps and keep them short and steady to limit movement in the upper body.

It should go without saying that you have to walk before you run. With shooting footwork, it’s more like you have to walk really slow before you walk at a normal pace. This takes effort and practice just to accomplish basic accuracy standards. There is also the fact you are wielding a gun while moving, and there is some inherent danger in that, so practice with dry fire, and when you go live, I’d suggest doing so under competent instruction.

If dry fire is a bit too boring for you, then check out an air gun that’s semi-auto. Maybe an airsoft gun, or something like a SIRT. I’m a huge fan of the Mantis Blackbeard if you want to take the AR rifle route for this training.

There are also two drills I like to practice footwork with that can be sued with dry fire, air guns, and dry fire devices fairly well.

This isn’t the box drill you are used to, but a literal box. It can be made of cones or markers or anything that can create four corners anywhere from 7 to 10 yards apart.

Start at the left rear corner and move forward with good form, with your gun up, dry-firing at the target. When you hit the front corner marker, begin making right lateral steps to the next corner. From there, make backward steps until you hit the final rear right-hand corner. From here, make left lateral steps to the rear left corner. Then repeat.

That’s a mouthful, but this drill comes from Mike Seeklander’s Your Defensive Rifle Training Program book. The whole book is rock solid, and this particular drill is perfect for practicing more dynamic footwork. You’ll need two obstacles. They can be big trashcans, blue barrels, or poles.

They should be spaced about five feet apart but in line with each other. Now with your stance assumed and practicing those footwork drills start walking in a figure 8 around the obstacles. You’ll face one direction the entire time and practice dry firing as you walk through the figure 8.

This drill is a little tougher than the box drill because it constantly changes directions, and the movement is more complicated. Still, it’s easy to set up and practice even inside the home for your nightly dry fire practice.

The good thing about having a gun is that you can hit a bad guy from a distance, so moving isn’t always required. However, it’s smart to be well versed in a multitude of skillsets, and being able to move and accurately shoot is certainly one of them. Like everything, it takes time and practice, but you’d be surprised by how effective you can be at landing shots while moving your feet if you get some practice in.