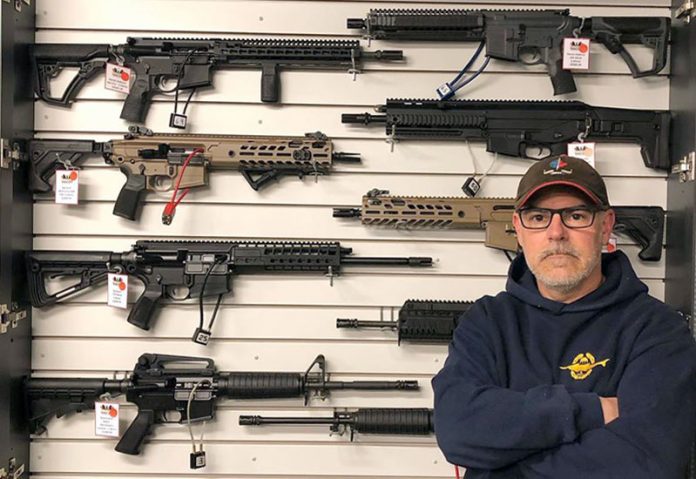 Cary Baker, the owner of Iron Sights Training Center in New Brunswick, Canada, has lost over 60% of his sales due to the Canadian ban on “military-style assault weapons.” (Photo: Cary Baker/Facebook)

Cary Baker, the owner of the Iron Sights Training Center in New Brunswick, Canada, has over $350,000 worth of guns he can no longer sell. Baker is just one of the victims of Canada’s ban on “military-style assault weapons” enacted Friday. The ban effectively put the kibosh on 1,500 different kinds of firearms, preventing Canadians from selling, transporting, importing, or using those firearms.

Baker opened his business in 2018 using his pension and savings as a retired Army Major. “I set this up as a nice retirement business. I run it legally,” he said.

Although he vows to stay open, the ban impacts up to 60% of his overall sales. “The people that come into my shop that buy these firearms are good Canadians,” he explained. He has contacted American suppliers to see if they’re willing to take them back, but so far the answer has been no.

Canadian Prime Minister Justin Trudeau granted a two-year amnesty period to allow current gun owners to comply with the ban. Trudeau said the government will decide on a buyback program in the coming months to provide “fair compensation” to people who own blacklisted firearms.

Adam Curuana is an avid shooter from Ontario who has appeared on Guns.com in the past. “I personally stand to lose roughly $10,000 in goods that I’ve invested in over the last eight or nine years in this hobby,” he said.

Curuana is also the account manager at Amchar, a company that imports guns from the U.S. as a smaller distributor, Amchar has lost an entire line of products, which according to Caruana, is almost half its inventory.

“As a result of COVID, I’m the only member of this household that’s working right now. My better half is unemployed. For me to have my job jeopardized is going to put me out on the street,” he said.

The firearms ban was enacted through an order-in-council from the cabinet — not through legislation. Trudeau suggested that the government was prepared to announce the ban months ago but the COVID-19 outbreak delayed it. Further bans, possibly on handguns, may come next.

A full list of firearms banned in Canada can be found below.