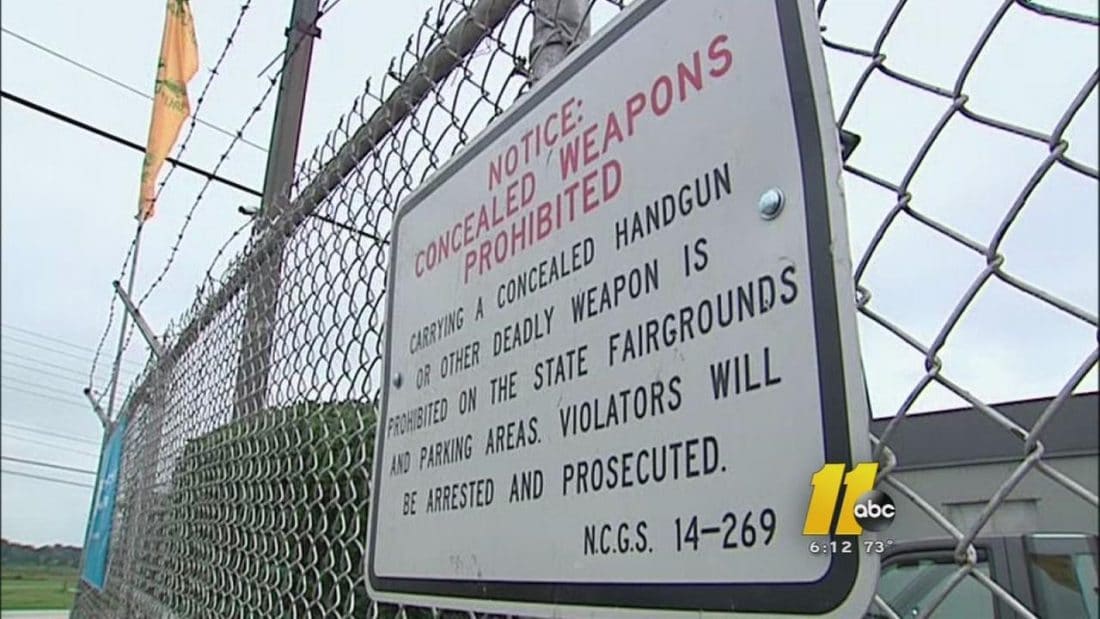 The North Carolina State Fair is set to kick off Oct. 16, but the state’s agriculture commissioner and a local gun rights group are at odds over the current “no guns” policy at the fairgrounds.

While guns have long been prohibited during the fair, except for those carried by law enforcement, some argue this should change due to the expansive gun rights package that was passed by the state legislature last summer. Meanwhile, Commissioner Steve Troxler, who has met with Grass Roots North Carolina, the group threatening litigation over the issue, isn’t budging. Besides signs at the entrances to the fairgrounds, attendees will have to pass through metal detectors and submit to a search.

“Our policy at the State Fair has always been not to allow weapons at the fair. It is our intention to continue that policy until we are instructed by a judge or the legislature to do otherwise,” Troxler said in a statement to Guns.com. “In my mind, as a supporter of the second amendment, as a gun owner and as a grandfather, I believe the mix of kids, guns, rides and large crowds is a bad idea.”

Troxler, though aware of the change in state law approved in Raleigh and signed by the governor, believes there is enough leeway in the statute, which he says is “clear as mud” to stand by his decision, stating, “We believe there is gray area in the law, and for that reason, we are erring on the side of public safety, common sense and the welfare of the State Fair.”

However, some would disagree.

“Troxler is choosing to prohibit lawful concealed handgun permit-holders from protecting their families not only at the fair, but also in the parking lots outside the fair,” said Paul Valone, the president of GRNC in an email to Guns.com. The organization, following an unproductive meeting with Troxler, is promising to seek an injunction against the commissioner and his gun-free zone policy.

Valone contends that the commissioner is seeking to have a court force him to remove the long-standing policy and signage prohibiting lawful concealed carry at the fairgrounds. Valone feels that Troxler is dodging language in the new state law that only allows, “assemblies of people for which admission is charged” to forbid permit holders if they are on private property. The state fairgrounds, however, are not private property.

Although Troxler told Guns.com the State Fair has a “significant law enforcement presence on the grounds every day,” Valone argues this may not be enough.

“As we’ve seen time and again, gun-free zones are dangerous places for law-abiding citizens,” Valone said. “No family should be rendered entirely helpless should an event occur such as what happened at the Wisconsin State Fair in 2011.”

The incident Valone references occurred on the opening night of the annual state fair in Milwaukee three years ago. After a night of fights among various teenagers and young adults, things turned violent after 11 p.m. when random attacks spiraled out of control and fair attendees were beaten and harrassed at random. The subsequent crackdown by state police and local law enforcement lead to 31 arrests and 11 injuries.

“Criminals are always empowered when they know that their intended victims are disarmed,” said Valone.”Posting against law-abiding gun owners is equivalent to a wink and a nod to the criminals who would prey on the now-defenseless families. Not an acceptable plan, Commissioner Troxler.”

According to its website, the week-long North Carolina State Fair for the last four years has seen attendance hovering at or just over 1 million people.