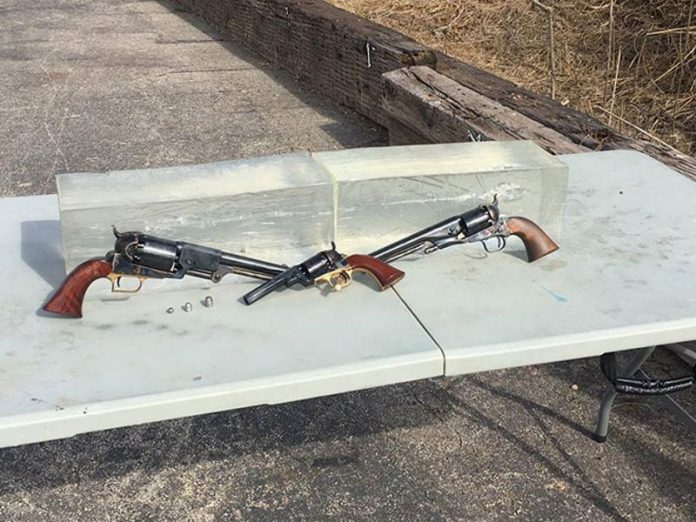 I have always wondered exactly how powerful those Civil War pistols were. I would wager most gun people have a passing familiarity with the percussion revolver that came to dominate handgun technology roughly from the mid-1840s up through 1870.  Firearms like the Colt 1851 Navy, 1860 Army, and Remington New Model Army were widely fielded in the American Civil War and throughout Western expansion and settlement before giving way to more practical cartridge revolvers like the Colt 1873 Single Action Army and the Smith & Wesson No. 3.

Of course, firearms of all kinds can be lethal. But I wanted to see just how much. So, I ran over to Clearballistics.com, grabbed some 10 % calibrated ordinance gel, and decided to see what these weapons can do on a simulate of living, human tissue.

The blocks are sixteen inches in length and I stacked them end to end to be sure no projectile could escape the combined thirty-two inches of gelatin. With everything set up, it was time to prep the contenders.

How they stack up

In this test, we used the most common calibers in the cap and ball world: 31, 36, and 44. Let’s take a brief look at what each caliber brings to the table:

A closer look at the wound channel, or lack thereof, of the 31-caliber revolver’s ball. You can see that the small channel extends beyond the final resting place of the ball. (Photo: Terril James Herbert)

The test revolver for 31-caliber is my Colt Baby Dragoon. Small 31 caliber handguns were the first pocket revolvers on the scene and were popular the world over, mostly with civilians. However, during the American Civil War, savvy officers and men on both sides snapped these little gems up for personal protection.

The load used was a .323” diameter lead ball. Conical offerings were available in the 19th century, but there was little weight difference, so I went with this common fodder. The chamber was filled most of the way with 15 grains of FFFg Goex black powder before seating the ball.

The pistol was fired from one foot away, to avoid missing the block. The shot landed well within the gel. The lead ball shot into the gel projected thirteen inches before bouncing back to the eleven-inch mark.

The wound track showed little deviation and relatively little damage to the gel, itself.

The recovered ball showed no signs of deformation, though the rifling marks are clearly visible.

Next up with the 36-caliber 1861 Navy revolver provided by my test partner, Murpheysmuskets. 36 caliber guns shot a nominal .375” bullet or ball. This caliber was designated a Naval caliber, because it was designed to kill human targets. 36 caliber revolvers were the first true belt pistols.

A closer look at the 36 and 44-caliber wound channels. Both bullets stopped well into the second block of gelatin. (Photo: Terril James Herbert)

By the time of the Civil War, percussion revolvers were being fed by paper cartridges and conical bullets. In the case of the revolving pistols of “naval caliber”, that was a load of about 20 grains of powder under a 130-grain bullet. We upped the charge to a near maximum 25 grains of powder over a cast Lee 130 grain conical.

The 36 was fired into the block and it left a modest trail of destruction, noticeably bigger in its wound channel than the 31, while out penetrating the latter by more than a factor of two. It traversed the first block with some limited stretching at the entrance. It exited the first block and sailed into the second before tumbling and stopping sideways at the twenty-six-inch mark.

The recovered bullet’s nose had been crushed, forming a wadcutter type of projectile on impact. Despite that, the bullet retained 100 % of its weight.

Finally, the largest commonly found caliber of revolver during the American Civil War was the 44, an Army caliber, meant for taking out both horses and men. By that time, a .456-inch diameter 216 grain projectiles were being used over about 30 grains of powder in ordinance paper cartridges. But the final contender in this gel test was a Uberti-made Colt 1848 Dragoon. Though officially retired by 1860, these revolvers were issued out during the war. At nearly twice the weight of a standard 1860 Army Colt, the Colt Dragoon digested fifty-five grains of powder over the same weight projectile.

The test projectiles. The first three are unfired. The last three were retrieved from the gel. (Photo: Terril James Herbert)

We used a fifty-five-grain charge with a 220 grain Kaido conical bullet, the closest to be found to the original weight.

When the Dragoon was touched off, it was easy to see why it—along with the Colt Walker—are the most powerful handguns ever issued to the US military. These loads may be pushed to the 1,000-fps border with impressive blast and concussion.

The bullet flattened into a wadcutter shape, but retained almost 100 % of its weight.

As a comparison, a 9mm ball round was fired from a Glock 19. We were unable to capture the bullet, but the ball round left wound track similar, though not as large, as the 44, before it skipped out of the second block. It did not react as violently upon impact, unlike the 44.

So is this test pointless? Perhaps so. Nobody carries a percussion revolver in the 21st century. But it is fun to find out what these handguns are capable of. This is handy for dissecting the past, but also has a practical application with handgun hunters.

The only conclusion to be drawn is that cap and ball revolvers are no joke. All the generalizing about these handguns being weak are simply not true.

Is there any merit? Yes, on paper black powder revolvers are inefficient. Black powder was imbedded well on the surface of the second block, showing that black powder does not burn completely. You will not get true high velocity from any black powder firearm. Getting to 1000 fps in the 44 requires a magnum load over a conical bullet. The 36 may also touch that barrier with a full charge and a lighter, lead ball. The 31 never left 700fps territory. These guns are inefficient, but they work very well.

All three calibers exceed or surpass the FBI 12-18-inch threshold for handgun effectiveness in 10 % ordnance gel. If the slow-motion animation is to be believed, the 36 and 44 have greater energy imparting capabilities than the 9mm FMJ projectile tested.

In the conclusion, though we no longer need percussion caps or a second pistol for a quick reload, even the percussion revolver is capable of great damage and a great deal of fun too.

Not bad for old technology.