I’ve been given a rare opportunity 248 and GAT friends. I’ve recently been able to consolidate my passion for the shooting sports and firearms industry into a single employment opportunity. The benefit for all of you is an increased pace of reviews and articles of which I am woefully behind on. The benefit to me is a stabilized and enjoyable career base (hopefully).

The mutual benefit is a vastly upgraded access to review material or anti-material, as is in this case. Even better is having the time to push those reviews out with the detail and substance this audience deserves.

Now onto this month’s gun review the Barrett M82A1!

Barrett’s M82A1 is the Titan of big bore and long distance shooting. It’s far from the only name or game in the shooting world for large calibers or long distances, but it is the most iconic and recognizable and for very good reason.

Back in 1980 Ronnie Barrett took John Moses Browning’s .50BMG cartridge and threw it inside a precision based long distance rifle platform he designed from scratch. .50 BMG had been used precisely at distances prior to 1980. Most famously perhaps by Carlos Hathcock, who used a scope mounted to an M2 Browning machine gun to fire a single round 2,500 yards to kill a Vietcong guerilla fighter. That distance record held from 1967 until 2002, when it was topped by another .50BMG rifle shot. The capabilities of .50BMG as a precision round were obvious, and Barrett developed a rifle to deliver on those capabilities.

The “Light Fifty” rifle entered production in 1982 and service with the U.S. in 1990 en mass and has been a packhorse since through to this day. Its current military format is the M107A1 a streamlined and suppressor capable version. The base design remains the same, but the bolt and muzzle break have been optimized for the use of Barrett’s .50 suppressor.

The M82 is a radically brilliant and simple design. The action is recoil operated, not gas like many smaller semi-auto rifles. Everything from the barrel to the bolt carrier rides on a massive recoil spring assembly. The mainspring behind the bolt carrier takes the brunt of the recoil force and has a long travel/compression distance. That spring goes all the way to the end of the buttstock from the rear of the carrier. The second half of the recoil operative design is the barrel assembly. It has two parallel springs under the barrel that stretch rather than compress when the rifle is fired. These two springs generate much higher tension than the larger recoil spring in the rear of the M82 and have a shorter travel distance.

Here’s the brilliance in action that design generates. When fired the M82’s bolt carrier and barrel are sealed and locked together as with any rifle. The entire locked assembly starts traveling backward on those higher tension front recoil springs. Those springs run out of travel distance after a few inches and start moving the barrel forward. The tank styled muzzle break on the rifle’s front throws gas reward around the shooter further reducing the substantial reward momentum the .50BMG generates. This has also allowed chamber pressure to drop to extraction safe levels and so the bolt carrier while holding the fired .50 case continues its reward journey to eject the spent round. Now the bolt carrier’s mass is much less than the barrel which is now moving forward again, changing the overall momentum of the entire rifle. The lower mass bolt carrier group ends up rather lazily impacting against the rear of the rifle while compressing the rear recoil spring, this gently tosses the spent casing of the last shot out and clears the bolt face to pick up the next round on the way back forward.

The recoil of the M82 certainly looks substantial, but the proof is in the ejection. Unlike an AK or AR which throws brass with authority due to the energy provided for ejection the Barrett lazily spits the brass next to the shooter as it provides a slow shove to the shooters shoulder. The lack of sharp recoil makes the M82 the wonder rifle that it is. I can say with authority that my Kel-Tec KSG is less pleasant to shoot. Provided you had the ammunition supply the M82 can be fired all day by shooters of any stature comfortably.

Above: Guest shooters of many statures, all smaller than mine.

The M82A1 from Barrett is a ton of fun to shoot as a civilian. It serves a more specialized role in the military where the M82 and M107 fulfill the role of SASR, Special Applications Scoped Rifle. Believe it or not the M82 is not a sniper rifle by the strictest definition, it does not quite meet the demanding accuracy requirements to be considered a true sniper rifle. Over the years, the various laws of war have shaped and restricted its applicable uses.

But practicality is the big ticket in the armed forces and the practicality of being able to send an accurate shot 1800 meters, the M82’s text book effective range, or more made it incredibly useful against anything and everything. Machinery, IED’s, vehicles, communications equipment, ammo cache’s, and enemy combatants all were equally at risk of the cacophonous roar of the firing M82. It’s a rifle that can reach out and touch the horizon.

The M82A1 CQ that I was behind dresses out as such: per Barrett.net

The M1913 rail on top is 18” and has a standard 27 minute of angle elevation adjustment cant. The top rail is placing the centerline of any optic placed on the M82 approximately 27 inches lower than the centerline of the rifles bore at 100 yards distance. This canting compensation for bullet drop at long distances is found on many long-range rifle and optical set ups, but 27 MOA is the greatest I’ve experienced.

The M82A1 is also offered in its standard 29” barreled configuration which adds about a pound to the gun.

And because Barrett didn’t want to leave out California they created a special Californized M82 with a non-detachable magazine chambered in their extremely accurate .416 Barrett cartridge.

My time behind this gun was limited by financial necessity (it is not cheap to feed) however the M82A1 suits its role to perfection. The heavy “Light Fifty” is extremely stable and stays precisely on target. Even after a shot getting back on target and/or transitioning to a new target is intuitive and natural. The ATN scope (out of production) was partly to credit, it is also an exceptional piece of equipment. 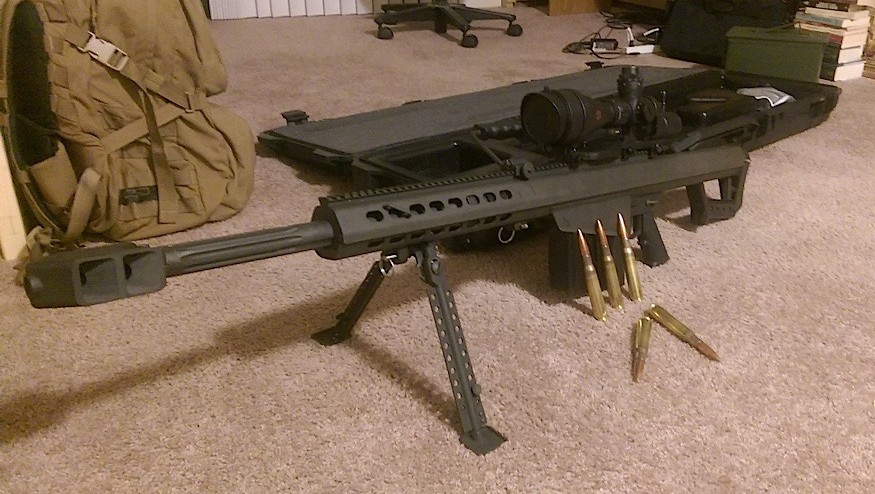 The trigger inside the M82 is probably the largest learning curve coming from smaller rifles. The trigger has no discernable break at all. This honestly perplexed me for a moment until I realigned my thinking to the rifles purpose. The “shelf” if you will on an AR trigger before it breaks, even a good one like a Geissele SSA, could detrimentally influence an extreme distance shot due to the sudden application of the extra pressure. The even pressure inside the M82A1’s trigger allowed me as the shooter to focus all my attention on the other factors to keep my shot aligned, breathing, sight placement, and support. When I had everything set I applied pressure to the trigger and along the even take up the rifle fires, I just kept everything else still. This trigger system, in my opinion, is optimal for a heavy long distance rifle like the M82A1 but would not benefit lighter rifles, even precision based .308s, to any great degree. The M82’s size is part of why the trigger system works so well.

In closing my friends, Barrett’s M82A1 “Light Fifty” excels in its roll and if you ever get the chance to pull the trigger behind one. Take it! As for purchasing one that’s a question only you can answer, they cost as much as a decent used car. This particular one is $8200.00 as is from Southwick’s Guns, Ammo, and Accessories. But there isn’t quite anything like it.