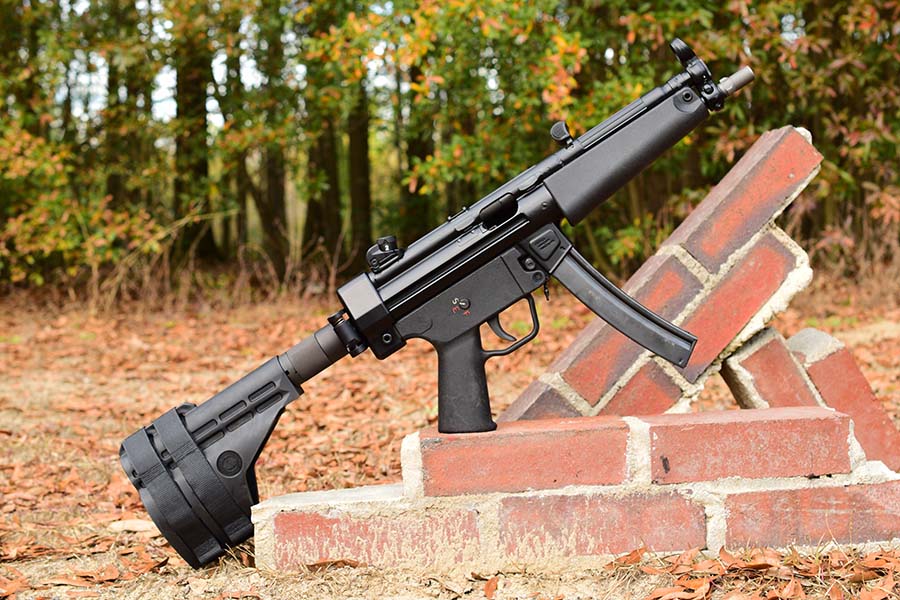 “Now I have a machine gun, ho ho ho.” John McClane’s words spoken by Hans Gruber cemented the MP5’s place in my heart. Watching the shoeless hero tool around Nakatomi tower while laying waste to terrorists with his trusty German submachine gun awakened a previously dormant desire in me. Sadly, I could never swing $30,000 for a real one, and HK94-style carbines are too unwieldy to capture the cool factor of the real deal.

I would have bought a new MP5 pistol, but Heckler & Koch no longer offers MP5s in any configuration to civilians, and clone makers have either abysmal quality control or lengthy wait times for builds — a tough pill to swallow when dropping $2,000. Enter, the Atlantic Arms AA89, MP5 pistol.

The AA89 is a roller-delayed, semi-automatic pistol firing from a closed-bolt. Chambered in 9mm parabellum, it feeds from 30, 50 or 100-round magazines and it includes two 30-rounders. The original design is an adaptation of the German military’s .308-caliber G3 battle rifle. It shares the same manual of arms and operating methods as its big bore brother.

Like the federally regulated MP5, the AA89 has an SEF-marked lower (for Safe, Semi and Full), diopter drum sights and a three-lugged 8.9 inch barrel. Unlike the German gun, the AA89 is semi-automatic only,  features a stainless steel barrel and is made in America. The latter of which is important since shooters won’t have to worry about swapping out parts to meet 922r compliance.

Also available as a carbine with a 16-inch barrel, the model reviewed is a pistol, so it doesn’t have a stock. Instead it uses a pistol brace to offer shooters better stability and recoil control. The brace is mounted to the gun’s backplate by means of an ACE-style folding mechanism. An interesting addition is a threaded spacer that allows users to adjust the brace’s length.

The brace keeps with the tactical aesthetic of the AA89 while greatly improving the weapon’s usability. Shooters who have fired similar AK or AR pistols without a brace can attest that while fun, their practical applications are limited. Neither as handy as a traditional pistol nor as shootable or accurate as a full-sized rifle, so-called ‘assault pistols’ linger as very cool range toys. The SIG brace elevates them from this lowly status to a serious weapon system.

Accuracy from the short barrel is an acceptable four minutes-of-angle. With a red-dot sight the AA89 would make a great, low-recoil home defense weapon that shooters of all sizes can easily use. Additionally, it ran great across 500 rounds of mixed ammo including 100 rounds of  Federal Hydra-Shok and SIG’s new hollow points. However, it’s difficult to fully seat third-party magazines loaded to capacity on a closed bolt, though this is a minor concern.

A major concern is ergonomics. The selector switch is difficult to manipulate without shifting the firing hand, and the forward charging handle is awkward for shooters accustomed to either AR 15 or AK weapon systems, but becomes second nature with practice.

Reloading any MP5 is slow, since the Germans situated the magazine release button approximately four miles from the pistol grip. HK addressed this with the paddle release that expedites reloading, but isn’t as quick as an AR.

The other concern is price. Nothing HK is cheap, not even clones.

The last issue deals with mounting optics. The G3 family of weapons all have difficulty attaching optics, and must use claw mount to do so. The other option is to have a rail segment welded to the top of the receiver, but most shooters shy away from permanently altering any weapon. Although because its length service life a wide variety of aftermarket parts exist for MP5-style weapons.

Without an arm brace, the AA89 is a cool range toy. With it, the pistol transforms into an ultra-handy, low-recoil weapon that even the smallest of shooters can effectively use. Shooters looking for a pistol-caliber carbine can find more affordable, less battle-proven options If shooters have the cash and desire for a classic, Cold War cool gun, the AA89 is what they need.