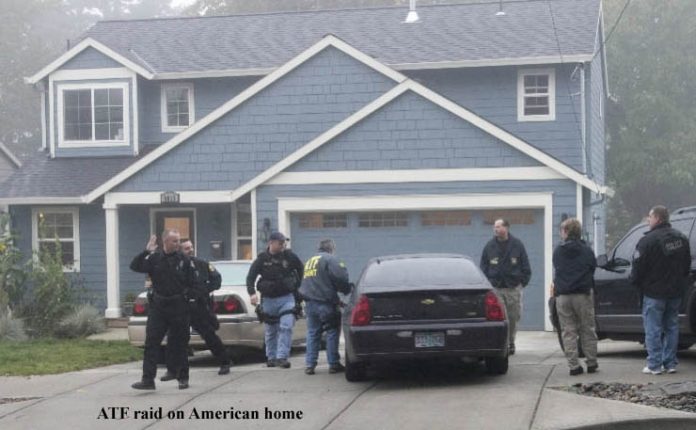 [Ed: This article was originally published in GOPUSA January 21, 2013 & in the Macon Telegraph February 10, 2013. It was reposted at HaciendaPub.com July 22 this year. Despite the topical political references, it is still an up-to-date look at the dangers freedom faces from politicians who want to “do something” via gun control.]

Georg Hegel (1770-1831), the father of dialectical idealism, which Karl Marx transmogrified as Marxist dialectical materialism, lamented that what we do learn from history is that man does not learn its lessons!

Despite what we have learned about the deleterious effects of draconian gun control, as always preceding tyranny and even mass killing of the people by their own government (democide) in the last bloody century, President Barack Obama and the usual suspects in the Democratic Party have resumed the beating of the drums calling for the resumption of authoritarian gun control measures.

These freedom-curtailing measures punish the vast majority of lawful gun owners because of the crimes and shooting rampages committed by mentally ill persons who fell through the cracks of the mental health programs, or criminals and copycat killers who flouted our lenient criminal justice system and were enticed by the sirens of the popular culture of violence to achieve morbid celebrity status even in death!(1-2)

As any student of history knows, loss of individual freedom and repression feature prominently in the development of totalitarian states. These features recur: First is the centralization and empowerment of a national police force with a vast network of surveillance and informants to spy on the suspected population; second, the issuing of national identification cards for all citizens; third, civilian disarmament via gun registration, and licensing, followed by banning and confiscation of firearms.(3)

Thus gun control, along with loss of liberty and repression, necessarily and prominently features in the unfolding, authoritarian designs of a burgeoning police state. The empowerment of national police forces with vast surveillance capabilities and networks of informants* to spy on the population (not foreign enemies) is a necessity, and so we already have myriad agencies of enforcement from the Drug Enforcement Administration (DEA) to the Bureau of Alcohol Tobacco and Firearms (ATF).

Here we should pause and be reminded of the misadventures of the ATF, virtually a standing army which initiated open war against American citizens, responsible to a significant degree for both the tragedies at Ruby Ridge, Idaho (1992), and Waco, Texas (1993). More recently, this agency, which has been empowered to control illegal firearms in the U.S., instead was found to be deeply steeped in crime and corruption, responsible for the infamous Fast and Furious Operation selling illegal assault weapons to Mexican drug lords. 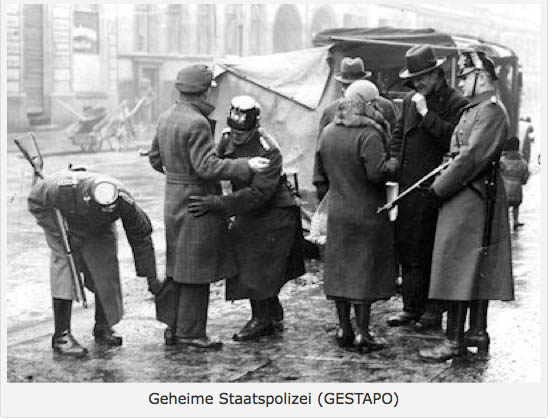 Historically once these mechanisms of oppression are firmly in place, persecution and elimination of suspects and political opponents follows, and every social, political and economic policy the state desires can then be implemented. This has happened with the National Socialists in Nazi Germany, fascist states such as Italy under Mussolini, and communist powers such as the former Soviet Union (and its satellites behind the Iron Curtain) and Red China.(4-5)

It is therefore astonishing and disturbing that Americans are now, once again, being assailed by President Obama with an avalanche of dangerous presidential decrees leading to the construction of the type of freedom-eroding scaffold which is anathema to the individual liberties our Founding Fathers bequeathed to us as responsible citizens capable of self-governance.

Construction of this scaffold reaching up to an authoritarian tower is the case with several bills that are being re-introduced in Congress requiring that all “qualifying firearms” in the hands of law-abiding citizens be registered. And the usual politicians are involved: Senators Dianne Feinstein (D-CA), Charles Schumer (D-NY), and Frank Lautenberg (D-NJ).

These gun control proposals would eventually require that all persons be fingerprinted, licensed with passport-size photographs, and forced to reveal certain personal information as conditions for licensure. Registration lists would make it easy for municipal, state, or even the federal government to seize the registered firearms, once they are subsequently banned. The re-introduced Assault Weapons ban will include over 50% of all guns already lawfully possessed by Americans.

Moreover, Obama has bypassed and gone over the authority of Congress by ordering the CDC to repudiate the congressional gun violence research ban issued in 1996. Such research was shown by numerous investigators to be politicized, result-oriented research that could only be characterized as junk science.(4)(6-7) Obama has now even taken the opportunity to encourage physicians to ask their patients about gun ownership and use them as snitches for the government!(8)

Legislation proposed by Senator Feinstein coming down the pipe mandates that gun owners register their firearms (9), in essence establishing, through the back door, a national gun registry, as was the case in Canada. 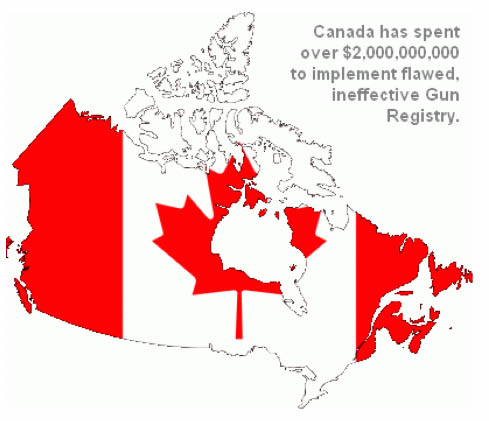 And the Canadian experience itself should be instructive. Lorne Gunter, writing in the Edmonton Journal as early as October 13, 2000, revealed that the Canadian Outreach program to register all gun owners was failing.

The result and cost of this Outreach campaign not only failed then to bring in the expected 1.4 million gun owners (to only one-third of that, 486,000), but it also exceeded the projected price tag many times over.  By December 2002, the Canadian registry boondoggle was already costing nearly $1 billion. The cost has escalated well beyond the $1 billion mark and has proven to be a complete failure.(10)

Americans, and now Canadians, have pointed out not only its excessive cost and ineffectiveness but also the fact that rather than helping track criminals and their guns, as claimed, registration of firearms is dangerous to the liberties of citizens, and as we shall see, counterproductive against criminals. 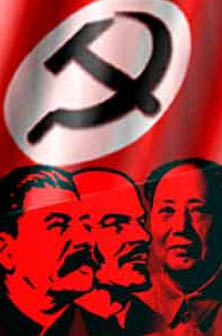 Unbeknownst to many Americans, who having seen and experienced mostly the goodness of America, gun registration is the gateway to civilian disarmament, which often precedes genocide. In the monumental book Lethal Laws, published by Jews for the Preservation of Firearm Ownership, we learn that authoritarian governments that conducted genocide and mass killings of their own populations, first disarmed their citizens. The recipe for accomplishing this goal went as follows: demonization of guns, registration, then banning and confiscation, and finally total civilian disarmament.(11)

Enslavement of the people then followed with limited resistance, as was the case in Nazi Germany, the Soviet Union, Red China, Cuba and other totalitarian regimes of the 20th century. Frequently, when presented with these deadly chronicles and the perilous historic sequence — namely, that gun registration is followed by banning, confiscation, civilian disarmament and, ultimately, by authoritarianism — naive Americans opine that it cannot happen here.

As to the dangers of licensing of gun owners and registration of firearms, they frequently retort, “If you don’t have anything to hide, then you don’t have anything to fear!” Followed by, “I see nothing wrong with gun registration because we have to do something; there are just too many guns out there that fall into the wrong hands.” This is not only a naïve but also a dangerous attitude because governments have a penchant to accrue power at the expense of the liberties of individual citizens. Civilian disarmament is not only dangerous to one’s personal liberty but also counterproductive in achieving collective safety.

The danger to a disarmed population has been further attested by two other great books. One is University of Hawaii professor R.J. Rummel’s Death by Government (1994). The second book is The Black Book of Communism (1999) edited by Stéphane Courtois. These books make it clear authoritarianism and totalitarianism are dangerous to the health of humanity. During the 20th century, an excess of 100 million people were killed by their own governments bent on destroying liberty and building socialism and collectivism.(4-5)

Gun Registration and the Law

Another fact Americans need to understand is that registration is directed to law-abiding citizens, not criminals. Not only do convicted criminals by definition fail to obey the law, but they are also constitutionally protected against any registration requirement! In Haynes v. United States, the U.S. Supreme Court in 1968 ruled 7-1 that compelling registration by those who may not lawfully possess firearms amounts to a violation of the Fifth Amendment’s proscription against forced self-incrimination. In other words, the court said that if someone “realistically can expect that registration [of a firearm] will substantially increase the likelihood of his prosecution,” the registration requirement is unconstitutional.

Astonishingly as it may sound, some courts have ruled that registration of firearms only applies to lawful citizens, not to felons. This has been pointed out by legal scholar Don B. Kates mentioning, for example, the Kastigar v. United States, 406 U.S. 441 (1972) decision. Does exemption of felons from gun registration sound irrational? It certainly does! Were gun registration to be implemented in the United States, criminals and felons could very well not be expected to register their weapons, since they are already felons proscribed from legally owning firearms. Requiring them to register their guns, some courts may opine, would necessarily incriminate them, and this would violate their Fifth Amendment rights.(12)

As Edmund Burke that champion of British liberty once orated, “The people never give up their liberties but under some delusion.” Americans must therefore remain informed and vigilant to preserve their traditional and constitutional liberties and prevent enactment of gun control legislation rooted in passion and emotionalism and that impacts them and not the criminals. Government efforts should be directed against criminals and felons, and should best be directed towards crime control rather than gun control.

Finally, let’s heed the admonition of the English philosopher, John Locke (1632-1704), who was greatly admired by the American Founding Fathers, who opined, “I have no reason to suppose, that he, who would take away my Liberty would not when he had me in his Power take away everything else.”

* These informants are often unreliable ruffians and underworld elements willing to be snitches, so they can be at liberty to commit common, non-political crimes. In the Soviet police state and the gulag, these valuable criminal informants were referred to as “socially friendly elements” by the guards and police.

3. This essay expounds and updates my previous article on the subject: Faria MA Jr. National gun Registration: The Road to Tyranny. The Freeman, March 1, 2001.

10. Gunter L. Shot in the foot by their gun registry: Auditor general confirms Liberal boondoggle has cost us at least $1B. Edmonton Journal, December 4, 2002, p.A18.

11. Simkin J, Zelman A, Rice A. Lethal Laws. Milwaukee, WI, Jews for the Preservation of Firearm Ownership, 1994. Available from: http://www.jpfo.org [N.B.: out of print, but see here]