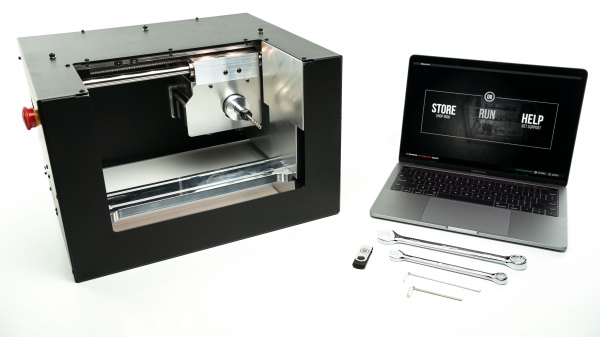 You can’t stop the signal. It’s already out there, and companies like Defense Distributed have only propelled it further. The controversial company is known for popularizing and designing 3D printed firearms with their Liberator pistol. Since then, they’ve also become involved in the 80% business. The Ghost Gunner is a desktop milling machine named for famed California senator and resident idiot Kevin Deleon’s description of homemade guns.

The Ghost Gunner is now in its third iteration, and the V3 is promising to be a more versatile and user-friendly design. The idea behind the Ghost Gunner mills is simple. Give someone who has zero machining experience the ability to complete 80 percent lowers and frames without any effort. If you have machining experience, then you’ll likely be better suited with a tradition set up, which is much more versatile.

If you’re like me and just guessing at it, then the Ghost Gunner V3 is for you.

What’s New With the Ghost Gunner

The most significant difference the V3 offers is the ability to mill out an AK lower now. AK 80% lowers been around for a long time, so it’s nice to see that compatibility. The V3 can also do AR 15s, AR 10s, PCC ARs, Polymer 80 Glocks, and 1911 frames. The Ghost Gunner covers all the popular choices out there, and maybe the V4 version will do Sten guns.

Other than that, the V3 is five times faster than the V2. You get a full VFD digital controller, twice the build space, automatic leveling, and they even added an interior light. Imagine sitting in a dark room cranking out completed guns with only the illumination of your Ghost Gunner. More than that, it allows you to watch the process which I find fascinating.

Some states have introduced laws requiring you to add a serial number to your completed build. The Ghost Gunner V3 can do that, as well. It can engrave and serialize your receiver or frame. I love this idea just from an NFA standpoint. Engrave your trust and number into the gun and submit that form.

The Ghost Gunner V3 isn’t shipping just yet, but it can be preordered at this time. It is a 500 dollar deposit on a 2,100 dollar machine. Admittedly it’s expensive. It appears that the initial pre-order sold out quite quickly. The current pre-order puts you on the waiting list for a machine in the first quarter of 2020. They even offer to finance the machines.

Why Do you Want One?

Simple, you can create a gun from a piece of metal or plastic without the touch of the federal government. The assumption that this exists for people who can’t legally purchase a firearm is ridiculous. The reason this exists is two-fold.

States like California make it an expensive nightmare to buy guns, so why not build them?

Second, it’s fun to build these guns. It’s fun to attach custom engravings. The process is educational and even entertaining. It’s illuminated for a reason.

The Ghost Gunner V3 is as much of a machine as it is a political statement. The statement is pretty clear and that it’s you can’t stop good people from owning guns. Order yours now, or don’t I can’t tell you what to do and that’s the point.