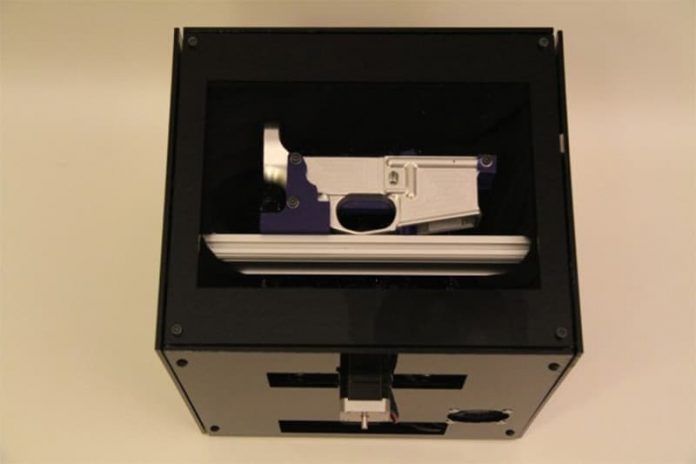 John Crump has an interview with Cody Wilson at AmmoLand.com. It brings us up to date, but if you’ve been following Wilson and Defense Distributed it doesn’t really break any new ground. But what interested us was the colloquy on the Ghost Gunner. In the interview, John said this about the CNC mill, a device we know and have used a little.

John Crump: Why did Defense Distributed decide to make the CNC machine, The Ghost Gunner (GG)?

Cody Wilson: We needed to make a product we could sell to raise the money to sue the State Department over Liberator. I’m being totally serious. GG came from ideas given to us through the course of Wiki Weapon and the success of DEFCAD. People often suggested we should make a CNC and stop being silly with the printables.

John Crump: The Ghost Gunner 2 is truly revolutionary. Why do you think the NSSF decided not to give membership to Defense Distributed which basically banned DD from shot show?

Come and Take It: by Cody Wilson

Cody Wilson: Honestly I think it’s the simple trouble of the association. We are suing the DDTC, a bureau in the State Department that enforces export controls and is a group the NSSF has to make very nice with so they can pretend to continue to influence policy directions. Nevermind that they have humiliated themselves with DDTC’s most recent guidance on gunsmithing, not to mention the outright disaster that the last six year of “export control reform” have been. Great work NSSF!

Cody Wilson is probably right about why NSSF wants to keep him at arm’s length: he has no interest in playing nice with others; his Spirit Diplomat is Gavrilo Princip.

But John Crump’s positive description of the GG produced this response in the comments to the article:

I bought and received a GG machine in March 2016. I read all the instructions several times and sent several emails with questions and then began to mill out a lower AR.

The machine milled it out well until about 5 minutes into the job and then the bit became stuck in the aluminum block and the milling program shut down after the bit broke free.

I contacted GG in Texas and I told them I do not understand why the machine did whet it did nor did I know how to correct the problem as I am {{{ NOT }}} a mechanical engineer nor am I a computer programmer . I told them I only have a 10th grade education and asked if the machine was idiot proof, they said it was….. I felt safe!

In Feb of this year, GG sent me a email telling me I had to order a new second generation spindle as the old part did not work very well (as I learned). It is now one year after I first received my GG machine. I still have 9 unmilled lowers and one damaged unfinished lower and a GG machine that is locked up and won’t work. Basically I have given up on it all!

A year has passed and I have not yet milled out my first lower AR15 lower! ……….. PERFECT!

We have to say that our experience with the GG was different than what Ben describes, too, but it was not without glitches. We have successfully milled out lowers with both the Windows and Mac versions of the software. We had some difficulty with setup, early on, and Defense Distributed’s Ben Denio was extremely helpful in getting things sorted out and in production.

We’ve also had one head-crash, trying to cheat a little and use a lower without a 100% milled out takedown pin pocket. In our case, the head crash did no permanent damage, but did cause an overload indicator to light up and we had to reset the whole machine (instructions are included in the manual, but they’re hardly crystal clear).

The manual is difficult to follow and we suspect that it would truly be a nightmare for a less computer-savvy person.

One final problem that we’ve had is that we get fine lines between each depth of the trigger pocket cut. We believe that that is due solely to our GG being on a wheeled cart, and moreover, set on a thin rubber mat on top. The axes of the machine move with considerable vigor, and it is not heavy enough to hold itself down. We suspect that these lines will resolve, giving us an appropriate surface finish, if we lock the GG down better.

The GG community, such as it is, really feels the lack of the forum originally envisioned for open-source solutions sharing. It didn’t happen, not by any fault of Cody’s, Ben’s, or anybody’s at Defense Distributed, but because the State Department took it in its Deep State head to ban anyone talking about making guns. (Rifle-caliber small arms need to come off ITAR, but that’s a whole other issue).

We seem to recall that several WeaponsMan readers have also bought a GhostGunner, and also have had mixed, but mostly positive, results with them. Perhaps we can share some solutions here, and troubleshoot the woes of Ben Miles and anyone else experiencing technical problems.