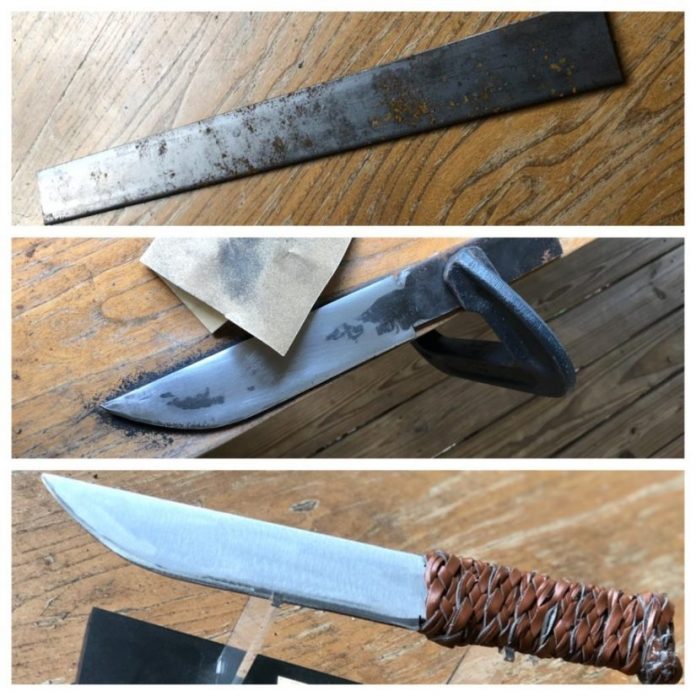 You take a rusty piece of scrap metal, a hack saw, a file, and you get to work. After hours of cutting, grinding, and sanding spread out of a week’s worth of days, you’re left with a knife that’s probably not quite as good as one you might buy at Walmart for just less than you’d spend on a six-pack of beer. Somehow, you don’t see this is a waste of your time. Instead, you sit back and stare at your accomplishment with a sense of wonder — imagining how much better you’ll be able to do on the next one-armed with the stuff you were able to work out in your head by screwing up on this one.

And you’re proud of how you screwed up less this time than you did the time before.

I’m no knife smith. Likewise, although I’ve torn every gun I own apart a hundred times, replaced parts, modified others — I’m certainly no gun smith. All I am is a guy that spends the better part of his day at a desk. I use these two hands to press buttons, communicate thoughts, and make my living — and despite the real and powerful sense of accomplishment I get from writing something I’m particularly proud of, my profession is, at its heart, a purely intellectual one. I think, I communicate, others read and respond, and through the miracle of modern technology, a dialogue of thought occurs. My thoughts and yours congeal into something new: an argument about how I’m wrong, a nodded head about how I’m right, or the realization that my little piece of the analytical puzzle, combined with a dozen other pieces from other sources, can combine into a greater understanding that, although I may personally lack, I can play a role in helping you to discover. I’m honored to play my part in the song and dance that is our constantly developing understanding of the world beyond our personal horizons… but after ten hours of reading press releases and responding to emails, I find myself growing impatient with the slow march of progress that is our collective understanding.

There we all are, sitting at desks, answering phones, attending meetings and generally doing all the things that we have to do to keep our families (and society) afloat; there’s a nobility to a long day’s work, an honor in doing what needs to be done, but sometimes it all feels too ethereal. This imaginary society we’ve built in our minds and manifested into reality is a wonderful thing, complete with internet porn, kitten adoption centers and everything in between, but sometimes the role we play in that mammoth machine feels too small. Sometimes, a hard day’s work starts to feel inconsequential. Sometimes you just want to shape the world the good old-fashioned way: with your own two hands.

My next-door neighbor doesn’t have the internet. A Georgia boy, born and raised, he’s spent the better part of his sixty-plus years in the patch of woods we both call home, and aside from a stint in the Air Force during Vietnam and another in prison a few decades ago, he’s made his living with a welder in his hands and little concern for who the president was sleeping with or how diplomatic efforts were unfolding a world away. His worldview is, as he’d admit, smaller than my own. While I sit up at night, wondering to myself about the implications of the next Trump/Kim summit or about China’s growing influence on American domestic politics, he heads off to bed, content in knowing that where there was once just a pile of steel, there was now the frame for a machine, willed into being by his own two hands.

When I finally fall asleep, hoping that my work has played its small part in our ongoing global conversations, a part of me remains unsatisfied and anxious. What if I missed the mark? What if my analysis is wrong? What if I made a silly mistake in a piece and the internet wolves are going to tear it apart? My sense of accomplishment is inherently delayed, because my work doesn’t matter if nobody reads it. My thoughts don’t matter if I can’t translate them from fired synapse into coherent language and I can’t know if I managed that feat until I see the response from others.

My neighbor suffers no such anxieties. He finishes his work, takes a step back, and judges for himself. Yup, he thinks out loud past the toothpick he’s chewing on, this’ll do. He doesn’t need things like the internet to have passion.

I’m one of those guys that leads a charmed life. Despite all my best efforts to get killed, I’m still here and thriving. My profession and my passion are one in the same: writing is what I’ve always dreamed of doing, and somehow through the miracle of technology and the universe’s sense of humor, I make a good living doing so–but sometimes, I just miss getting my hands dirty. Every once in a while, I need to do something that’s just meant for me.

So, I yank a piece of scrap metal out of a pile, and I start to grind. I buy a new buttstock for my AK and set about figuring out how to yank off the old one (Pro Tip: use a C-Clamp or vice rather than a hammer like YouTube suggests if you want to salvage the old one). I don’t need another knife. I don’t need to fiddle with my rifle. Hell, I’ve got plenty of rifles, I don’t even need this one to begin with. What I do need is a chance to reconnect with the physical world; to make something and judge it not only on its merits as a knife, or a gun, or a car but based on me, and what I think I’m capable of.

Sometimes, I’m disappointed and know I can do better. Sometimes, I’m surprised at how well I do. Always, I feel better for having tried.

I’m sure I could come up with a good reason to have made this if I tried hard enough.

Here’s to our impractical endeavors. Whether you collect kids toys from the 1960s, tie your own flies for fishing, hunt deer, tinker with cars, or bake cookies, these things are more than an opportunity for us to busy our hands along with our minds, they represent a deeper connection to the world we live in.

Not the geopolitical world. Not the macro-perspective on humanity world, but the real one all around you. I love what I do and the world I operate in but I value my time spent in the garage, busting my knuckles open and shaping reality with my hands instead of my perceptions. If you, like me, are blessed and fortunate enough to get to live your life in both worlds, be grateful.

We’re the living bridge between the past and the future. We’re the real people lofty political ideas lose sight of. My impractical hobbies offer me a very practical anchor: luring me back from my global concerns and macro-perspectives into a small room beneath my house, where all that matters for the next 15 minutes is beveling this blade right in front of me just so, in time, I can step back and say yup, this’ll do.

Images courtesy of the author