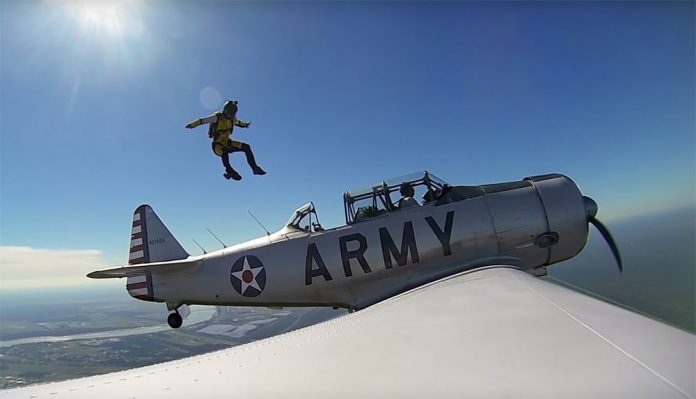 Veteran skydiver Craig Saucier take advantage of some microgravity to levitate off the back of a former USAAF T-6 Texan.

In the brief video, captured by GoPros on Saucier’s helmet and the Texan’s wingtip, the parachutist can be seen exiting the back seat of the WWII era single-engined trainer and steady himself on the fuselage. Then the pilot does his part and induces a little zero g-force or low-g as he throttles backs and noses over just a bit, producing a scosh of weightlessness in Saucier– kind of like you remember from being a kid at the top of the swing set arc– and he catapults clear of the rudder of the T-6 as the plane leaves him leisurely behind to hit the silk.

More than 15,000 T-6s were built and used by the military of the U.S. and her allies and some (AT-6Bs) were even armed with small bombs, .50 caliber machine guns and rockets. They remained in service well past WWII and some were even used by the Air Force in Korea and Vietnam as FAC aircraft, where they carried spotting rockets to light up the bad guys for the fast movers to come in and deliver that sweet gasoline smell of napalm in the morning.