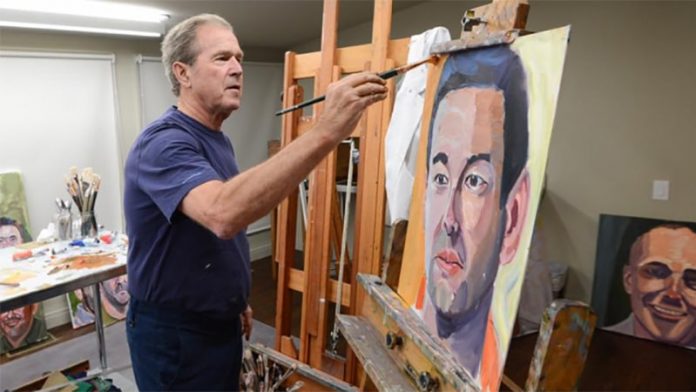 “Over the past several months, I’ve painted the portraits of 98 wounded warriors I’ve gotten to know – remarkable men and women who were injured carrying out my orders,” says Bush.

The former President, who in the weeks and months after Sept.11th gave the orders to go into Afghanistan and Iraq, conflicts in which the nation is still enmeshed, has in recent months been painting what he terms Portraits of Courage from those injured in those wars.

“I think about them on #VeteransDay and every day,” noted the former Commander and Chief– and the last military veteran to serve as President– on November 11.

Proceeds from a collection of the paintings amassed in a book of the same name go to the George W. Bush Presidential Center, a non-profit organization whose Military Service Initiative “works to ensure that post-9/11 veterans and their families make successful transitions to civilian life with a focus on gaining meaningful employment and overcoming the invisible wounds of war.”