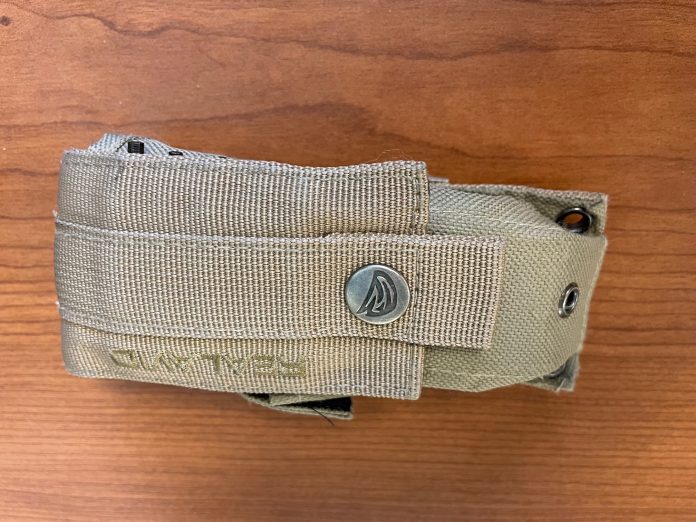 Serious shooters are always looking for a multitool that they can toss in their range bag that will accomplish a broad set of requirements. The Real Avid AR15 tool might just be the one tool to rule them all.

Backstory: I bought the Real Avid AR15 tool with my own money; I was on military orders and realized I had left my multitool and M4 front sight post tool at home, so I figured “sure I’ll drop 80 bucks on this thing.” Given the number of times I’ve used this tool since then, it has more than paid for itself. Interestingly, I have never used it on an AR15 or M4 carbine, but I’ll get to that in a minute.

The Real AVID AR15 tool comes with quite a few tools on it. It has spring loaded pliers, a decent knife blade, a screwdriver/bit set with 5 double sided bits, and then some AR specific scrapers and threaded attachments for cleaning rods and the like. It also comes with a combination M4/M16 front sight tool that doesn’t attach to the AR15 tool itself, but rides along in the coyote tan MOLLE pouch in a little side pocket. When I’m working in my part time job as an Air Force Combat Arms instructor, that pouch stays threaded on my belt for easy access, because I do end up using the tool quite a bit.

Not counting the front sight tool, which I use constantly, the order of frequency that I use the attachments on the Real Avid AR15 tool goes: 1) screwdriver/bits, 2) pliers, 3) knife, 4) I’ve never used anything else. The screwdriver and it’s bits are honestly the most useful part of this tool for general shooting activities, because it comes with three flatheads that fit all the screws on an S&W revolver, a Phillips head, several torx heads including one that fits Aimpoint ACROs, and four hex heads which cover the most common hex screws I’ll interface with. The screwdriver head locks in two positions, one at 90 degrees relative to the grip for better leverage, and one in a straight line with the grip to fit into tighter spaces.

The pliers on the Real Avid AR15 tool are a nice touch, because they’re spring loaded. When the tool is open, they naturally want to stay open, which makes using them with one hand while you’re trying to juggle a gun or an ammo crate a lot easier. Probably my only grip about the pliers is that while you can deploy them with one hand, it’s a much easier task if you use both hands to bring them into play. I like being able to have the pliers easily deployed with one hand, something I can do very simply with my SOG multitool. However, the Real Avid pliers are a lot stronger and more comfortable to hold than my SOG, so if I need to do…plier shit, they would be my go-to.

I have used the actual Real Avid AR15 tool on Ruger revolvers, S&W revolvers, Beretta APXs, Beretta 92s, and pretty much every other gun I own. I’ve used it to open packages, break down ammo crates, home repairs, tear down stages at matches, and pretty much anything else you’d need a multitool for. In the years I’ve had this, I’ve honestly found it to be pretty useful, definitely enough that it has justified the 80 dollar price tag I paid for it. The biggest benefit for me as a revolver shooter is that it has entirely replaced the small toolkit I used to carry in my range bag. If my gun goes down during a match and I can’t fix it at the safe table using the Real Avid AR15 tool, it’s going to require my full tool kit and work bench. If you’ve been looking for a good multitool that will perform a variety of tasks pretty well, definitely check the Real Avid AR15 tool out.