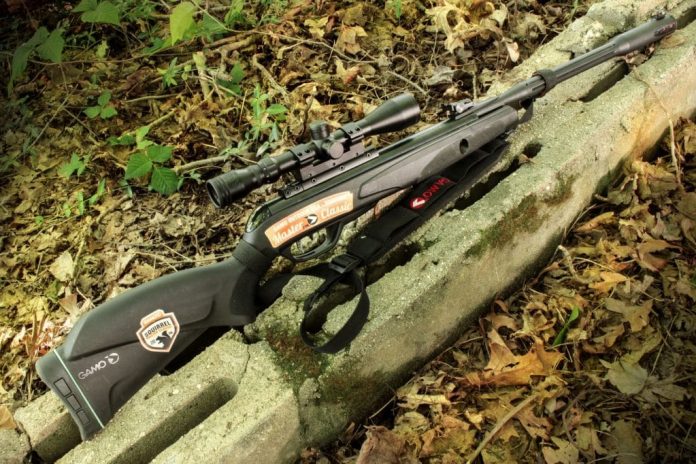 The most silent air rifle in the Gamo lineup

The feature rich Gamo Whisper Fusion Mach 1 leaves very little to be desired. The recoil absorbing rail allows for pain free scope mounting and helps largely with its ability to hold zero. The integrated muzzle break makes it a pleasure to shoot, and the IG spring piston sends pellets down range at lethal velocities.

Ah, first light . . . the hopeful feeling of a brand-new day inspired by the smell of coffee and bacon, the sounds of the woods coming alive and the thud of an unsuspecting “tree rat” meeting his silent demise. Yes, I am talking about the Squirrel Master’s Classic. Since 2014, professional hunters, writers and industry representatives meet at the Southern Sportsman’s Lodge in Montgomery, Alabama to join up with the local 4H kids and test new gear in a competitive squirrel hunt. Celebrity hunters like Mike Waddell of Bone Collector, Brian “Pig Man” Quaca, Ralph and Vicki Cianciarulo of Archer’s Choice and Jackie Bushman of Buck Masters (among many others) came out for the fun. 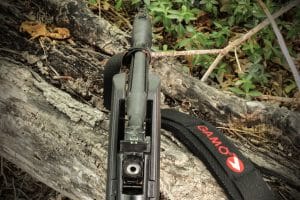 The iron sights are ideal for first and last light hunting. The author found these more useful than a scope for his first and last shots of the day. With the right scope mounts, the rifle can be set up to be used with both.

The 2016 event brought the pleasure of hunting with the Gamo .22 caliber Whisper Fusion Mach 1 ($249.99). My first impression on the rifle was “This isn’t what Ralphie got in a Christmas story”. That’s because it wasn’t. Gamo is the world leader in adult airguns, and their airguns generate enough energy to humanely dispatch living creatures. In plain words, airguns are not toys.

The Whisper Fusion Mach 1 gets its name from their new sound suppression system. Sound suppression on this beast starts all the way back by the chamber where it goes through its first stage. About 3/4 of the way up the barrel the rifle is suppressed again, making it the quietest air rifle Gamo produces. This is perfect for follow up shots (if you need them). This new-for-2016 rifle houses the most powerful IGT System. The IGT (Inert Gas Technology) delivers more power and consistency than conventional spring systems, while making cocking effort very manageable. Gamo’s fastest moving pellet, the PBA, is clocked at 1,050 f.p.s. in .22 cal. We used the Gamo Rocket pellets on our hunt, which were later confirmed at an average velocity of 785 f.p.s. via my Shooting Crony Gamma Master chronograph (shootingchrony.com,$220.95).

The Whisper Fusion Mach 1’s adjustable sights have red and green fiber optic inserts, making them super bright, even first thing in the morning. Also included is a basic 3-9x40mm magnifying optic. Although the optic was average, the base was extraordinary. Airguns put more abuse on an optic than even the biggest centerfire rifles. This is not because they recoil more, but because they recoil differently. Gamo’s Recoil Reducing Rail (RRR) has polymer struts that take up the shock your scope normally would. The rear sight is very robust and features micro click adjustments. With the inherent accuracy of the rifle, the author was pleased that he was able to a dial his gun in just the way that he likes. The sights held zero through an abusive, mobile hunt, and the recoil of the monstrous power plant that Gamo has employed on this air rifle.

This opens the field of usable optics if you choose to upgrade. Carrying this rifle afield for an entire day gave us a “real world” evaluation. Over 100 squirrels that day met their doom at the hands of these rifles. Later testing proved those little rocket pellets group smaller than half an inch at 15 yards, accurate enough for even the smallest critters. This accuracy is attributed to the entire design; however, the rifleman in me gives it all to the trigger. This rifle came equipped with the CAT trigger system, or custom adjustable trigger. This trigger allows you to not only adjust the pull weight, but also the length of the first stage as well. I was never a fan of a two-stage triggers—if my finger is on a trigger it’s because I’m going to send it. With that in mind I adjusted it down as far as it would go, taking all but about a quarter inch of creep out. Turning the weight adjusting screw down all the way gave me a soft release at a 2 lb. 10 oz. pull weight, confirmed by my Lyman digital trigger-pull scale (lymanproducts.com, $74.95), mind boggling for an airgun! Offhand shooting was comfortable if you are accustomed to rifle shooting. This is not a lightweight kid’s airgun, although weighing in at only 6.6 lbs. makes it anything but cumbersome. 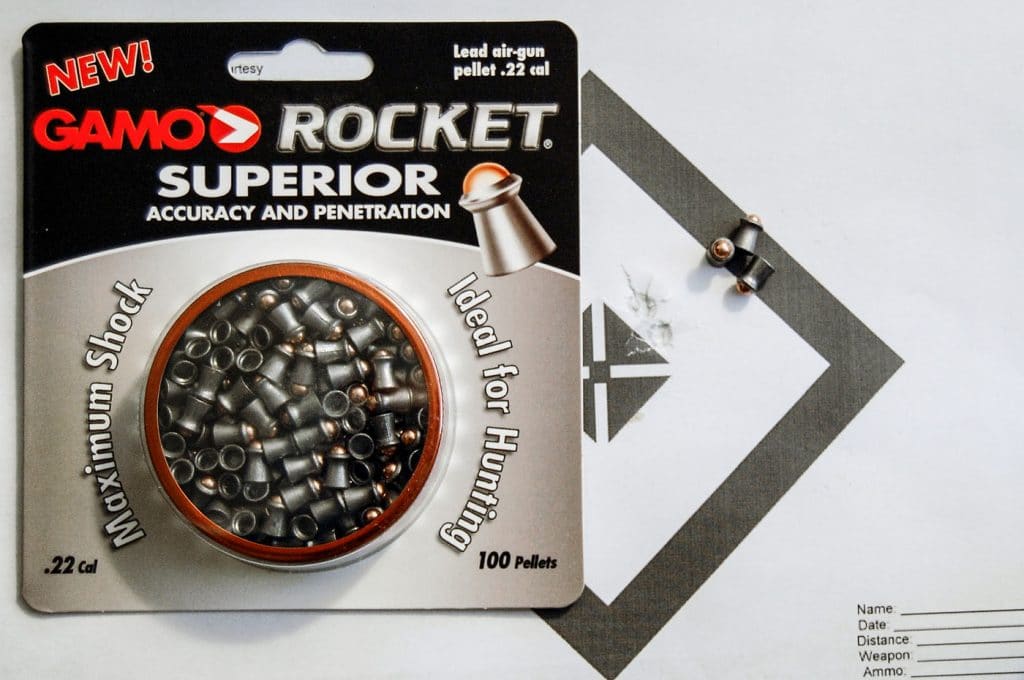 The Gamo Rocket pellets feature a steel tip and delivered excellent consistency on the hunt. These were responsible for quite a few of our downed squirrels. Back home the author had a lot of fun punching tiny groups with them in his basement. Having one round to do it all saves the headache of working with two zeros and learning two different trajectories.

Airguns serve a critical role in the firearms community. For many they are the easiest way to teach a new shooter fundamentals and safety. Getting these new shooters involved is the only way to guarantee the survival of this sport.

The hunt came off great, with everybody bagging lots of game. The most important part of the experience, however, was getting the kids out, many for their first hunt. To paraphrase Jackie Bushman at the opening ceremonies, “The biggest mistake we make is taking kids deer hunting. It’s cold, boring and usually leaves them with a bad taste in their mouths, sending them back to their video games. Kids like to have fun, not remain still for as long as possible. Squirrel hunting is about action! Take them out, let them run through the woods and have fun! If we don’t pass this sport on it will perish.” Look for the Whisper Fusion Mach 1 and the extensive line of Gamo pellets and accessories at your firearms retailer. The rifle comes packaged with the new Pro Shot ID system that color codes air guns and ammo for their intended use. The rifle’s $249.99 price tag makes it the best investment you can make for a good time, a lot of laughs and the preservation of the shooting sports. For more information contact Gamo USA; Tel.: (954) 581-5822; Web: www.gamousa.com