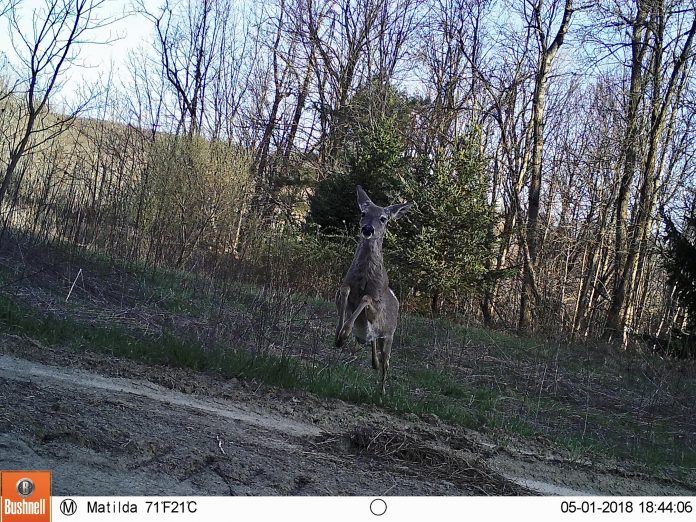 A few months back I wrote a review of the Bushnell Wireless Trophy Cam. It was my first experience with a game camera of any kind and was a bit of a learning experience.

I thought that enough time had passed that I should pen an update to the original post. It’s been about 5 months. I’ve learned several things in that time which I would like to share.

First of all, I’d like to say that this has been a fun view into a world that I’ve never seen before. It’s kind of like having a secret peephole into the woods. Granted, its more fun when there is enough signal for me to receive the photos to my phone as little surprises during the day, but even driving up to pull the card in person has given me some entertaining views.

My main issue has been with signal strength. I’ve had the camera in six different locations on the 100+ acre property over the past 5 months, and at only two of those did I reliably receive uploaded photos to my phone. The rest of the locations did not provide a reliable enough signal for me to regularly receive photos by cell. My phone itself would have plenty of signal in the same location with only two bars, but the game cam apparently needs  three to four bars in order to transmit. That was a bit of a frustration. One would assume that if the signal can support an iPhone using Facebook, it should be able to support a game camera uploading photos. But apparently the camera’s antenna and transmitter aren’t strong enough for that.

So I went to Plan B, bought a card reader that would plug into my phone, and travelled up several times to pull the card manually. That rather defeated the purpose of spending the money to get a wireless cell-capable camera, but there it is.

The lithium battery life wasn’t bad, considering that the camera was always using power searching for a signal. I did change them twice in 5 months, but that was more out of experimenting to see if fresh batteries would improve the upload capability than actual need (It didn’t help). The photos themselves are excellent quality, and I’ve gotten a few doozies. The ones I’m including here had to be resized file-wise, and are not an indication of the clarity of the originals.

Some of the critters I have caught on cam include:

There were also fun nighttime views of raccoons, opossums, skunks, and rabbits.

Finally, there were trespassers of various varieties – on foot, on horseback, on ATV, and in trucks and jeeps. I’m not including photos of the offenders to protect the privacy of the guilty.

There are a few lessons I have learned during this process.

The first is that one should never expect the chosen camera location to look the same in June as it did in May. Especially if May was non-stop rain. There was an approximately six week period during which I was not receiving transmitted photos, and I could not drive up to pull the card. By the time I got up there the weeds had grown from knee height to head height, completely obscuring the camera’s view of the road and meadow. I deleted at least a thousand photos of nothing but green in front of the camera – triggered by weeds moving in the breeze. At least they were only digital frames and not expensive film that got wasted. Yes I’m old school and I remember film cameras. (Get off my lawn you kids!)

Another lesson I learned is that where you “think” the game will be is not always where it actually is. I set up the camera and a blind early in turkey season, and when I came back 2 weeks later, there were zero turkey photos and only about three deer photos. They just weren’t hanging out at that location – at least at that time of year. Just because you think the topography is right doesn’t mean the game agrees with you.

As a corollary to this lesson is the reality that where the game actually is, isn’t necessarily where the cell signal is the strongest. Sometimes you have to settle for a manual card read as a trade-off for getting great pictures.

I did have a fun comeuppance where the turkeys were concerned though. In this article I told the sad tale of my last day of turkey season. When I came back up to the property  a few weeks later to check the camera, it had captured not only the ATV trespassers, and me leaving in a huff, but the next trigger sequence four hours later showed a hen turkey standing right were I had been standing that very morning! I took that as a humorous karmic middle-finger to the would-be hunter.

I have also discovered that animal motion does not provide the “only” camera trigger. I mentioned the thousand frames of green weeds already. Then there was what I can only assume was vibration from woodpecker holes in the tree the camera was mounted on at one point. That was another couple hundred frames (which actually transmitted). The camera apparently had a really good time – it probably needed a cigarette afterwards – it just didn’t capture anything useful. I’ve also got lots of nighttime shots of fog blobs. I’m not sure if it was the actual vapor that triggered the IR, or if there “was” a critter there that moved too fast to be captured. Either way, the shots are kind of creepy-looking in a “Ghosts of the Gettysburg Battlefield” sort of way.

One more lesson I learned is that after the camera has been in place for a month or so, one needs to expect that the local insect fauna has set up housekeeping, and may not be pleased with interference with their new home. I found myself shaking, brushing and smacking a few hundred ants off myself during the last camera move. The camera itself was sealed and fine, but the cable lock, the camera housing, and the camo tape that I had disguised everything with was crawling with unhappy ants. At least I don’t live in fire ant country, and at least it wasn’t yellow jackets … or spiders (shudder).

All in all, though it’s been a fun experiment, I would only buy this camera again if I were SURE there was adequate cell coverage at the location – or if Bushnell improves the antenna and transmitter. As it is, I will be buying another Bushnell – just not a cell-capable one. There is a significant difference in price, and if I have to pull the card manually most of the time anyway, I’m better off getting the non-wireless version. As always, your mileage may vary.